Advice and hints on how to create the perfect character illustration.

As I say in the video, I will probably be going back to the costume and having a mess around with it, because I'm not entirely happy with it and the video would be an hour long if I recorded until I was happy with it. If I have any interesting ideas that I think could make good content for a video, I'll include them at the start of next weeks video. Also, remember to say which you'd like me to do a tutorial of next week, anime style face and hair or normal face and hair.

As promised, part 1 of the new mini series of videos here on the Blog on Tuesdays, starting this week with posing. I did focus mainly on one pose, but I threw in a few other bits as well, and the principles I go over whilst making this pose can be applied elsewhere as well.

Hope y'all find it helpful. Oh, and sorry for my voice, the fan on my Mac was going crazy during the recording, so I had to filter and EQ the buzz out afterwards and it makes my voice sound a bit weird. Hopefully it won't happen next week.

Remember to leave suggestions for costume ideas for next weeks video. If there are any things you've seen someone do on Heromachine that you'd like me to go over, feel free to say and I'll see what I can do (it might be an idea to leave a link to the HM picture you reference if you do so).

Sometimes the wellspring of invention runs dry and you need some help coming up with a cool concept for a character to design. If that happens to you, or if you're just looking for a challenge, experience what it's like to take someone else's vision and bring it to life. Head on over to Reddit's "Character Drawing" subreddit and look for entries marked "[LFA]" (Looking For Art). People give descriptions of their characters and you can reply with your version.

If you do, please tell them you came from HeroMachine and give the link. Also, I'd love to hear about it as well.

Good luck and have fun creating!

How to use the Mask feature in HeroMachine3

Masking is the process of placing one item inside another, so that the masked item is only visible where it overlaps the masking item. Masking causes a lot of confusion, so let's look at a few examples at what this subtle and powerful tool can do.

Voila! You have masked one item onto another one. Like this: 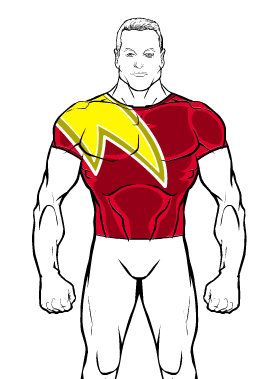 Note that once it's masked, you can drag, rotate, or otherwise transform the masked item (the lightning bolt) around and it stays masked, only being visible where it overlaps the masking item (the shirt): 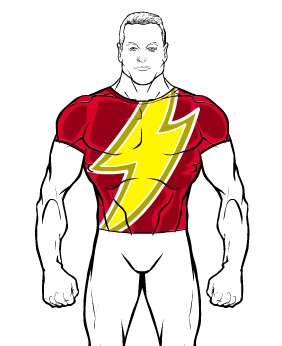 Using this same basic approach -- load the base item, load the second item, click mask, click the base item -- you can place items in your character's hands, apply a flag from Backgrounds to a banner or shirt, make a belt fit a non-Standard body, and much, much more. It opens up a staggering array of possibilities to take your portrait from a paper doll to a true illustration.

Hi all, I'm back. I missed posting and talking to everyone. I'm not back to full power yet (and don't know if I can get there), but I'm going to see what I can do. Over the years working with Hero Machine, I have noticed that some people need help getting a character just the way they want them. I have helped with giving recipes (I may get back to them here in the future) and trying my hand at doing the design and showing what I have come up with. Most of you know that I mainly do the plain Jane characters, not all the Zypping and extra shading, I like the way the characters look just the way they come out of the machine. I'm not saying the other ones are not good, because they are great, it's just not my cup of tea. So to get to the topic at hand, "Character Design Help", here is the way this works.

Ask for help with any designs you need too. If I can not answer the question, I am sure one of the other creators can put their two cents in and we can help you work things out. You can post a sample picture of the design you want to make and I will give it a try to see what I can come up with. Other creators are welcome to show what they come up with too. Remember this is a "help" post, if you want to share your characters you are welcome to post them in the forum, we would all love to see the work you do posted there. It really is a great place to share your art, or just to talk to other creators, it is a friendly place for all ages to visit and enjoy. Always keep in mind that we can not do copyrighted characters here, I know that there are designs and styles of characters that you would love to have your character look like, but we need to play it safe. This being said, ask for help with making the design and not for making the character. Try to keep your help request to one a week for now, until I am able to get my legs back under me. I will try to respond as soon as I can, I'm am not as fast as I was before. If your request is not answered with in the week posted it does not mean that it is not being worked on. I will try to let you know if I am able to help or not. Remember other creators are always welcome to help out.

As always, please forgive me for spelling and grammar mistakes. Thanks, Hammerknight.

Character Of The Week- 13th July

This week, we're going to look at not so much a character, more a scene by the master of Heromachine comic covers; RobM. 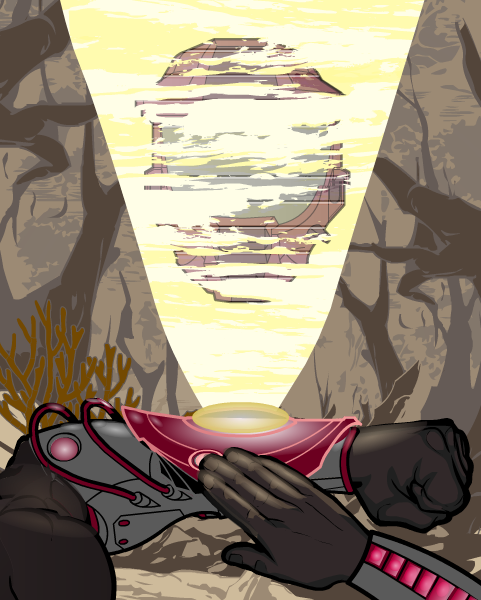 Now, the main thing that attracted me to this piece was the lighting, especially on the wrist projector and the right hand. There are some good hints here on how to get really bold lighting effects, so I asked Rob about how he did them and hopefully he won't mind if I put up here what he said in reply:

The right hand is actually two hands. I masked the bottom portion with the thumb to an insignia so that I could use the darker prime color on the hand's under side. The layer below is a full hand where I used a lighter color for the prime color. Then I laid gradient background shapes over each finger at strategic places with the prime and second colors at 50%. It's tough to do shading on hands because masking works differently for hands than it does for other items."

Whilst these might be the most striking aspects of the picture, it wouldn't be half as good with out some of the finer details, such as the glow on the glove item underneath and to the side of the projection (especially on the wires, which can be very easy to overlook).

Also the projection its self is very well thought out. By a combination of a slightly transparent main focus (the helmet) along with the horizontal line effect and the clouds from the background items (masked to the beam) gives a very good impression of static interferance as usually seen in sci-fi war hologram communications.

Finally we come to the background. The best thing about this is that it doesn't distract attention from the main focus of the piece in the foreground. By using earthy, dull tones and a lighter than black line colour, it contrasts with the clear, bold and precise foreground to give a distinct feeling of depth to the picture and suggest a murky, mysterious and dirty world beyond what we can see.

Posted in Character of the Week, Things I Like, Tips & Tricks

Today's Quick Tip is; Hand Alignment. I am including a blank sheet if anyone wants to share their tips with everyone. Keep the size the same, no bigger then 6"x8" or 600x800 pixels. 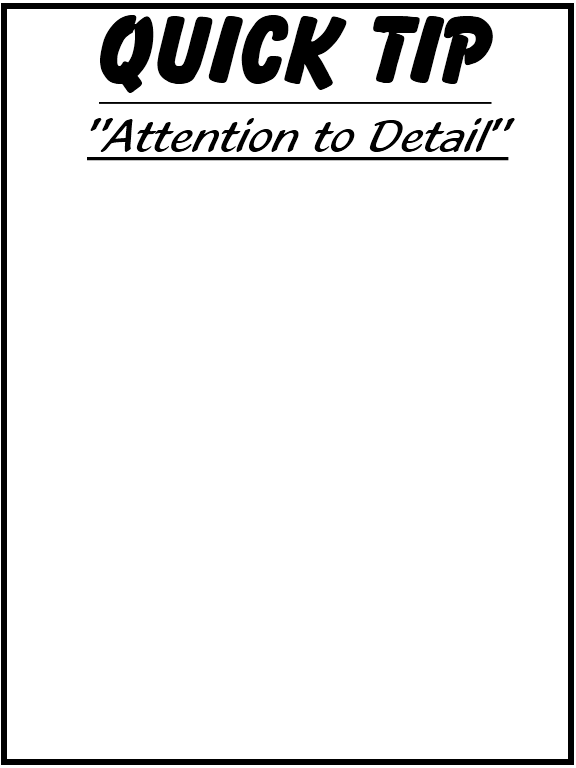 E-mail them to me at: thehammerknight@yahoo.com

Posted on January 3, 2013 by Hammerknight | Comments Off on Quick Tips “Attention to Detail”

I posted this to the forums way back when, and I was thinking a quick tip here and there would be good to post here on the blog. If everyone likes the idea, I will post tips here and there from here on. There are a lot of tips in the forums, but I know that there are people that do not visit the forums that do visit the blog.

Comments Off on Quick Tips “Attention to Detail”

Using Windows 7's Snipping Tool to get a Character Image

(Many thanks to Forum Moderator and all-around great guy Hammerknight for the following tip! -- Jeff)

I'm not the best with the computer, so when I find something that makes things easier on me I like to share. The other day I was looking for a cropping tool to use on my lap top, so I went to Yahoo search and entered "cropping tool". What I found was great. There was a how-to article about the free Windows 7 Snipping Tool. I don't care much for Windows 7 but the Snipping Tool is great. I didn't even know that it was already on my computer. I went to search for it in the program search bar and it came right up. I hit the button and cropped my picture and saved it in less time then it takes me to use print screen. I tried it out with HM3 and it worked. It is one of the easiest things to use on the computer. You have a few choices to save in. No more, print screen, paste in Paint, crop it, copy it, paste again, and then save it.