Create (or load) a character and click on Save, and check out the new tab structure: 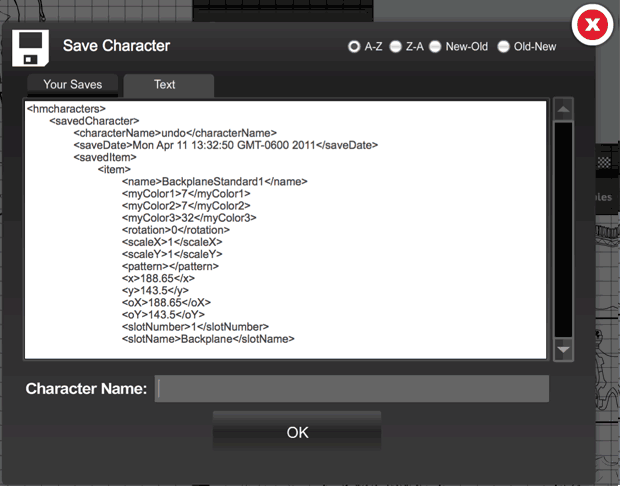 The first tab is labeled "Your Saves" and has all the stuff that you're used to in the Save window -- file names, dates, delete buttons, etc.

The "Text" tab is all new. It shows the text string representing whatever configuration of items you have up at the moment. As soon as you load this screen, all that text is loaded into your clipboard so you can paste it into a text document or email just like you do with HeroMachine 2. I need to add an "info" dialog explaining that here, but for now it's a little basic. 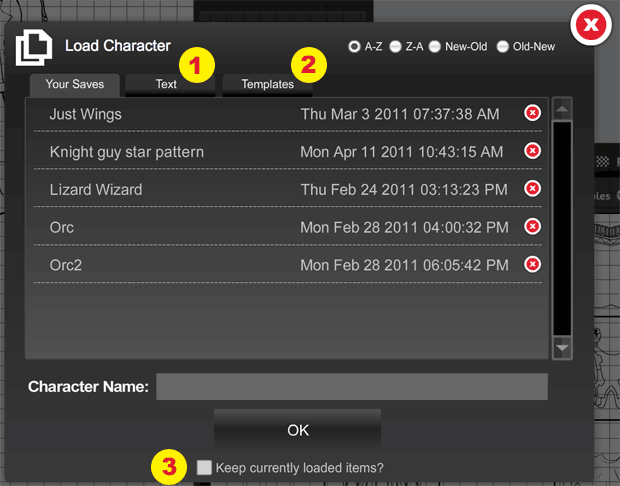 Taking those in order:

The first two are pretty self-explanatory, but the last one is really exciting. Basically this means that if you create a nifty looking weapon, for instance, out of ten different parts, you can save it as "Bob's Awesome Gun" or whatnot and then load it with one click into any character you like. Or if you have a cool environment you've assembled, again you can save and load it without losing the new character you've put together.

The only drawback is that the new "character" you load with this option appears in front of whatever's already on the screen.

I could definitely see expanding this feature so that in the "Templates" area you'd have all sorts of neat stuff (like the great "Fire Hair" recipe from MMI or the portal to another dimension effect a few people have done) you could download and install into your creation instead of having to figure it all out on your own and build it by hand. If you can't tell, I think this is a real game-changer.

Anyway, if you're of a mind to run the new stuff through its paces I'd appreciate hearing about what you think of it, any bugs you find, or anything else you want to say.

23 Responses to HM3: Text save testing