The curse of Wonder Man

I would argue that no character in comicdom has a worse fashion history than Wonder Man. I've talked before about his penchant for hideous costumes, but just to refresh your memory, here's a retrospective of the character's modern incarnation: 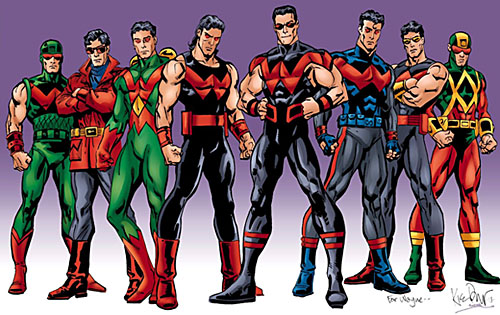 But did you know that Wonder Man's sartorial suckage is not just bad, but historically bad? And I mean that literally, because this is how the very first incarnation of the character appeared in 1944: 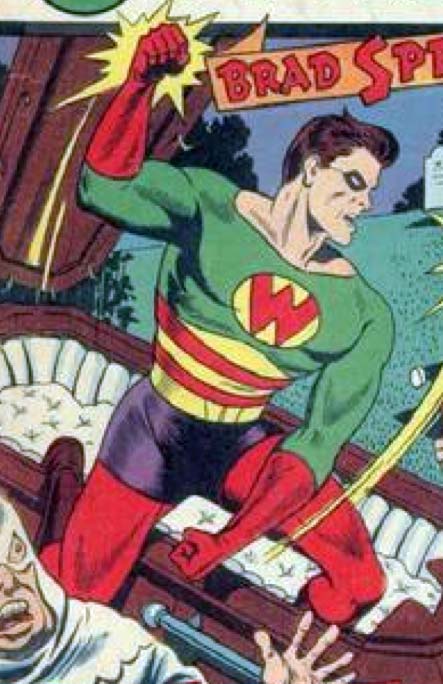 They were called "Four Color" comics for a long time, and you can see the tragedy that results when a hero flaunts that convention and puts together a five color costume. For the record, that's red, green, yellow, purple, and (though it's not visible here), brown for the boots. And those mutually clashing colors are cleverly arranged to cause maximum visual carnage. I can't figure out why you'd have horizontal red and yellow stripes, topped with an inverted yellow chevron just below the pecs, all on a field of green atop a set of purple biker shorts.

I've said it before and I'll say it again, but in light of this new historical evidence it bears repeating: Wonder Man richly deserves a Lifetime Achievement Award in Serial Bad Costuming. That's sixty-seven years of looking like a fool, folks! The only real wonder here is how he manages to keep looking terrible despite that many decades of retcons.

But I'll give the Wonder Man himself the final word on how to judge this little ensemble: 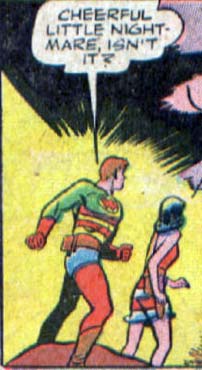 41 Responses to The curse of Wonder Man