Are there no fashion designers in LA?

I'm going to get grief from my friend Rob Rogers (author of the super-hero novel "Devil's Cape", which you should buy if you haven't already) over this, but I think the West Coast Avengers in this cover shot should win the award for Worst Dressed Team Ever: 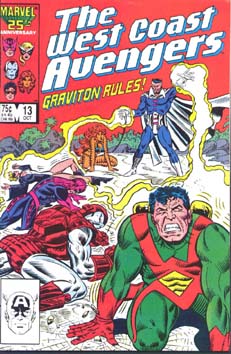 Staring at the left, we have Iron Man, who in blatant violation of accepted fashion norms is wearing white after Easter. Or is it before Easter? Regardless, Iron Man should never wear white. First of all, white is the color of purity, and I think we can all agree that Tony Stark is anything but pure. And second, Iron Man in anything but gold and red is like Santa Claus in fuchsia. It just doesn't scan, daddy-o. If I recall correctly, that armor also featured the triangular chest blaster, which had the dubious distinction of sucking rather than blowing. This particular configuration was like the New Coke of super-hero fashion, something better left unremembered and buried as quickly as possible.

Then you've got the Poorly Dressed Super Couple, Mockingbird and Hawkeye. I never understood Mockingbird's enormous flappy sleeves. Combined with her big sweeping eye mask, she looks like she's right on the cusp of exploding somehow. It's not the worst outfit ever or anything, but it's not good. Especially when she stands next to her purple-clad husband with equally sweeping facial garb. Sometimes, putting two mediocre costumes side-by-side in a married-couple situation just makes each of them worse. Kind of like marriage itself! Thank you, thank you, I'll be here all night, please, tip your waitresses.

I'm going to skip Tigra altogether, because I don't want to cast aspersions on anyone who's into furries. But yeah, not my thing. And you know, having a mostly-naked furry chick with a tiger tail and claws and eyes and ears next to all these very heavily-garbed men, particularly one in armor, and it's just ... eww.

Luckily, the Gang Who Couldn't Dress Straight is being attacked by the equally fashion-challenged Graviton, featuring his specially designed nuclear jock strap. I bet he's a real hit at the League of Super Villains Con each year.

Finally, we come to the guy who may just be up for the Lifetime Achievement Award in Serial Bad Costuming, Wonder Man. This poor sap can't catch a break, despite spending his career in Los Angeles, which features more fashion designers per square foot than virgins at Dragon*Con. And that's saying something.

Look at the monstrosity he's sporting in this episode. You've got bright green and red, which shouldn't exist anywhere outside of a Macy's Christmas window display, broken up with a huge yellow diamond in his gut. Why? We in the West Coast Avengers Auxiliary Tailor's Corps like to ask rather, "Why not, we're all color blind here anyway, screw it." Granted that motto doesn't fit easily on a ball cap, but we like it.

But the colors aren't the worst part. Not even the awkward bulbous yellow jet pack is the worst part, despite the fact that Tony Stark (who's ON THE SAME TEAM) could have designed something cooler looking in the time it would take him to down his sixth martini of the morning.

No, the worst part is that the giant red stripes are supposed to form the joined letters "W" and "M" for "Wonder Man".

Yeah, I know. Think about that for a minute and sit back in awe.

Why don't they just let the poor bastard stay dead if they're going to treat him like this? Look, I'm not saying his original outfit, designed by "Three Blind Mice Fashions", was a high point in the garment industry. But I AM saying that it was better than this horrible monstrosity.

The best hope for this group is that Graviton finishes them off and puts them out of our misery, because they really should have been called "The Fashion Injustice League" rather than the West Coast Avengers. This is LA, people, have some respect!

18 Responses to Are there no fashion designers in LA?