You rarely get honesty in comic covers, which is what makes the look of horror on the face in this background so refreshing: 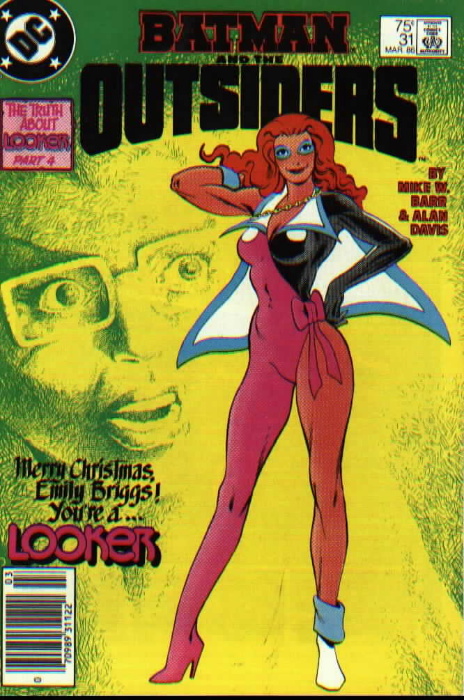 I like how she's drawn inspiration from so many different sources for her ensemble. And by "drawn" I mean "stolen", and then "changed to make even worse".

For instance, she's somehow ripped off Captain Marvel's cape and slapped gigantic lapels onto it. I defy you to name one piece of clothing ever improved by adding lapels.

Michael Jackson had the idea for wearing only one, glittery, glove, and had Looker stopped there all might have been forgiven. But no. Not content with just swiping the concept, she took it up a notch by wearing just one boot. One pink boot. The other foot looks to be clad in nothing but a sock and a floppy powder-blue towel. Whatever else you want to say about the unfortunate Mr. Jackson, dude never went out in terry cloth.

At least Captain Marvel and Michael Jackson were well-dressed, A-List type guys. You can't blame an up and coming super-hero for borrowing inspiration from them, but frankly there's no excuse for raiding the D-List. And by D I mean Dazzler, who is going to be hard-pressed to keep her secret ID secret without her powder blue faux-eye-makeup mask. Even then, she's not going to be nearly as pissed as Sailor Moon will be upon discovering her hair bow is now bedecking the lone orange legging on this unpleasant tramp's jaunty hip.

Given this bizarre melange of magpie-like thievery and eye-bleeding color choices, you're hard pressed to pick out just one element as "the worst". Luckily Looker has thought of that, and helped us out by thoughtfully having gigantic white nipples sewn to her breasts. That kind of altruism will go far in your heroic career, Ms. Briggs.

Regardless, you have to admit this costume would certainly make you look. Granted, you'd be looking in horror, but you'd be looking. And as Paris Hilton has proven to our dismay, that's pretty much all it takes nowadays to be a "success".

Reader Kate was nice enough to send this suggestion in, and I thank her both for the idea and for summing up this travesty so perfectly: "It looks like an explosion in the Good'n'Plenty factory." I could've saved us all several hundred words by just pasting that sentence, but then that wouldn't really be in the "obnoxious excess" spirit of "Looker" -- or all of DC in the Eighties, for that matter -- now would it?

(Image and character ©1986, DC Comics, Inc. Many thanks again to reader Kate for the contribution!)

23 Responses to Look away