We all remember our "first", and for me that "first" involved a muscular young man with a magnetic personality wearing a black corset and little else: 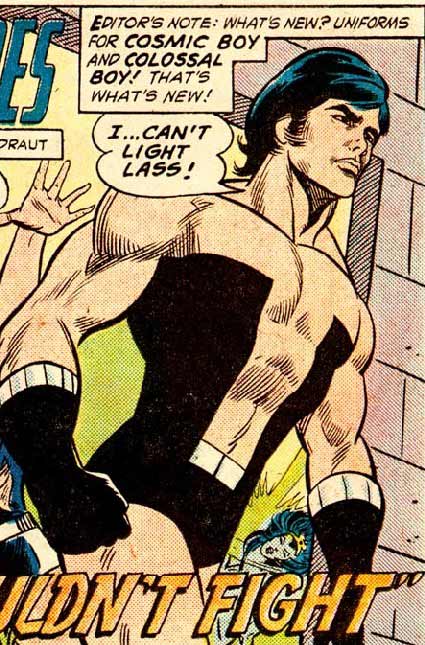 I'm talking, of course, about my first "bad super hero costume", courtesy of the Legion of Super-Heroes' Cosmic Boy. It was the first time I remember consciously thinking "Wow, that's ugly." And I lived through The Creeper, folks.

The ambiguous skin-tone color is bad enough, but it's compounded by the lack of a neck seam to separate out the nekkid super bits from the costume super-bits, and in a family comic that's a no-no. But to make it all worse -- cosmically worse, if you will -- is the pattern the black parts of the outfit make.

Specifically, the pattern of a push-up bustier that the black parts of the outfit make.

Now, maybe in the future it's cool for men to run around looking like half-naked ladies of the night. And I'm down with whatever gets your jollies, at any point in our timeline, but that's just flat-out bizarre. In a group that has Giant Bondage Lad, a guy whose super power is to eat stuff, and a chick in bell bottoms, it's really saying something when you draw the biggest laugh when entering a room.

Cosmic Boy, putting the "skin" in "skin tight" since the 31st centry.