I'm not the first person to notice that most African-American super-powered individuals have "Black" in their name somewhere (you never see "White Superman" or "White Flash" or "Pink Green Lantern"; for some reason it's only dark-skinned people that need to have their melanin level slapped onto their super identity). But I do think I've found what is either the a) lamest b) most egregiously offensive or c) funniest example to date: 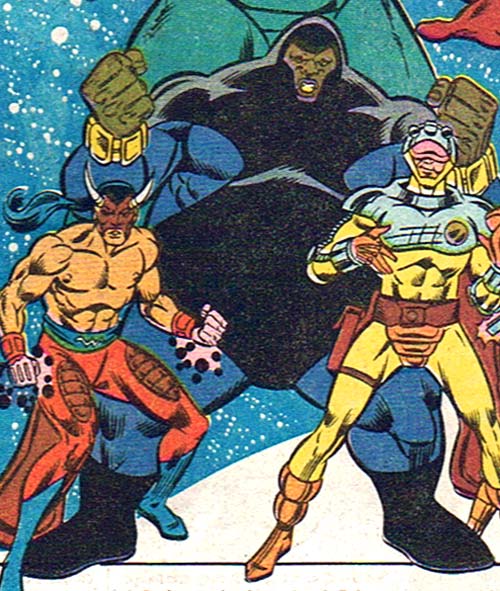 Since he's got dark skin, by law "Black" must be part of his name. And his other defining attribute is that he's really really big, so naturally you get the phenomenally creative moniker of "Black Mass". I assume they first came up with "Big Black Fatty Fatty", but decided it was just too exhausting to letter.

I mean, seriously, this is the best the creative minds at DC could do? I've not mentioned "Black Lightning" or "Black Panther" or "Black Racer" or any of the other dozens of ham-handed names crafted by white comics publishers for their dark-skinned characters, but ... "Black Mass"?! I stand humbled before the awesome lack of creative energy that went into coming up with such an uninspiring name, and the unutterable lack of self-awareness that let them think "Wow, that rocks, we should definitely publish that."

I only wish Marvel had caught on to how easy this super-hero naming business is, so we'd have "White Strong Guy" instead of "Juggernaut" or "Hairy Pasty Claw Man" instead of "Wolverine". Because surely, I thought, "Black Mass" was the result of creative laziness, and not a (doubtlessly subconscious) example of subtle racism.

But then I noticed that "Black Mass" is part of a team ("The Cadre") of super-villains. And that the name of the leader (or "boss" if you will) of this super-team is a white guy named -- I am not making this up -- "Overmaster":