I have uncovered the first hidden treasure in the Great Random Comic Book Pile -- behold the insane awesomeness that is ... Prince Chaos! 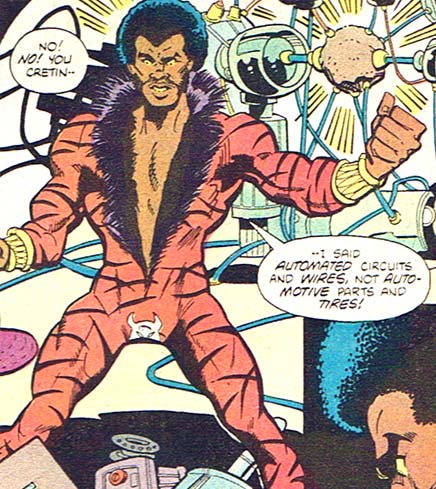 I'm tempted to love the mutton chops, or maybe the fur fringed, plummet-to-the-navel neckline, or even the strange hash marks all over the ruby red outfit. But I'm going to have to go with the tiny "Kilroy" type face peeking up from his crotch as my absolutely favorite bit of this ensemble. I like to think that in some future issue, this tiny man will get his own dialog, which, believe me, will rock.

The character is from issue number 13 of "E-Man", by First Comics. The original run of the series was artist Joe Staton's first big-time gig, and has a frenzied, crazy, "somebody's high" vibe that's hard to describe. For instance, the first few issues are narrated by a ghostly Albert Einstein. I am not making this up.

Staton later went on to work on Green Lantern during the years I was collecting it, and now that I have read E-Man I can see why they'd give him that assignment. GL's crazy ring-inspired creations (giant irons swatting villains, enormous glowing jackhammers digging out a mine collapse, catcher's mitts galore) are a lot like the various forms into which E-Man contorts his energy body. In just this one issue, for instance, he turns into a life-preserver with a duck head, a bouncing toaster, and a freeway overpass.

Again, I am not making this up.