Imagine a comics panel. You've got a dramatic visual layout, the brightly-colored and powerfully muscled Bulletman barreling into hapless thugs with lowered shoulder. A vigorous starburst explosion heightens the impact of the crash, separating men from hats and setting limbs akimbo, thugs flying. A simple black and white divider in the background enhances the tension.

Meanwhile the caption at the top spells out what we're seeing, employing powerful words like "fury", "thundering manpower", and "hammer". All of which sets us up nicely for the ensuing onomontoPOWia. Perhaps a WHAM or the traditional POW? Or, more daringly, a BOOM or SHA-KOOOM? 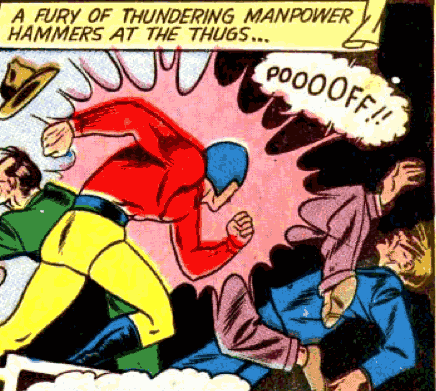 No. Oh no. Because in a world with ninja tanks and villains slapped silly, a world where the two most powerful heroes get flung around the skies by their necks, limbs flapping like chickens spun at the end of a farmer's arm, "thundering manpower" goes "POOOOFF".

I haven't done an "onomontoPOWia" post in quite a while, but I can't pass this up: 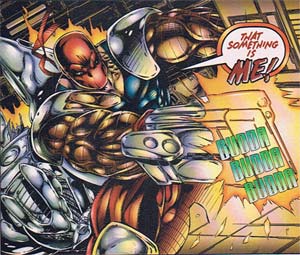 Don't let yourself get distracted by the seething mass of pus-filled bulges that constitute his "muscles" or his grotesque anatomical proportions or the pathetic inking or the lackluster color or the lingering questions of where his other hand is and what happened to the handle of that gun. Because that would be a rookie mistake.

No no, the real star of this little tableaux is the onomontoPOWia. Specifically, look how big his shouted "ME!" is compared to the BUDDA BUDDA BUDDA of the gun's discharge.

If a guy brings a gun that big to a fight and it's quiet enough to not even be shushed by a librarian, something is definitely amiss. Image characters of the Nineties were all about the macho, and clearly this guy's trying, but he's never going to make the big leagues with a wimpy weapon like that. I mean, a flying headband and skintight faceless ski mask and obnoxious musculature and bad attitude and gravity-defying shoulder pads will only get you so far, you know? At some point you have to fire that boomstick and when you do, you'd better be able to bring it, bucko!

Nah. No one in the Image Nineties would be able to resist showing off an ... asset ... as big as that would imply. On the contrary, they'd be hanging a dozen pouches off of it and giving it its own title.

I'm not saying Adam Warlock is getting smushed by a giant stone vagina here: 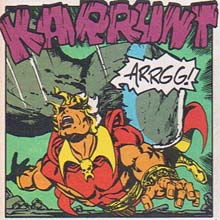 I'm just saying, if you're NOT getting smushed by a giant stone vagina, you've got no business going "KARRUNT" with those kinds of visual effects on it.

Also, I would pay cash money for a comic book featuring as its main character a Thing-like ambulatory pile of hard-hitting stone genitalia. Because that would be awesome.

Before there was sound

While going through the Golden Age Comics archive, I noticed that apparently movies weren't the only form of entertainment that were silent when they started. Take a look at these panels from 1941's "Super Mystery Comics" and notice how the artist renders the sparse onomontoPOWia: 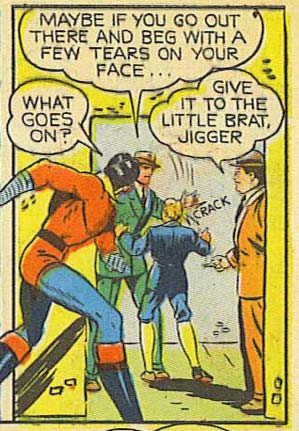 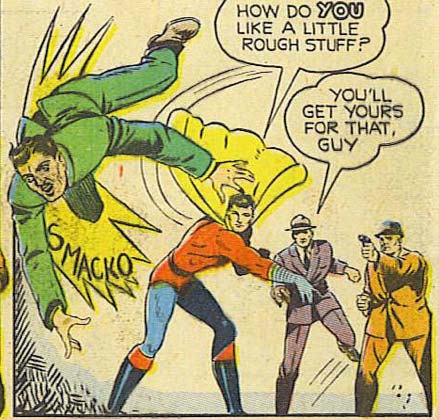 The big jagged-outline visual effects we've come to expect are already present (filled with yellow, usually), but the accompanying sound effects owe more to the craft of the letterer than the artist. In fact, I believe the letterer was responsible for filling in these elements, for many many years, which might explain their spartan appearance.

I also began to notice how rarely sound effects were used at all. You could almost guarantee a gun firing would get a "BANG" or "POW", but seldom anything else that wasn't very loud indeed in the real world. You can go for pages and pages without any onomontoPOWia at all, which to modern eyes is quite strange.

The medium progressed quickly, though, as you can see from this panel from 1947's "Cowpuncher": 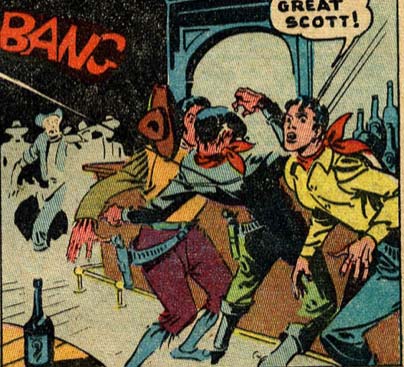 The simple typographical black words are now more boldly drawn and filled with a dramatic red, slanting into the frame on the same trajectory of the bullet. Compare that to the earlier "Smacko" and you can see how much more effective the later treatment is.

Eventually, of course, onomontoPOWia would become so ubiquitous that you couldn't avoid it, crammed into almost every panel, and immortalized in the "Batman" television show with every punch or kick. I'm glad we've toned that down since then, incorporating the sense of hearing more fully into the page rather than making it awkward either by its absence or its omnipresence.

Going through these old comics is really amazing, I love seeing how the medium has evolved in the last fifty years. Do yourself a favor and head on over while you can still download them without having to register!

Given the illustrator, it's hard to tell exactly what's going on here, but regardless I hope that "WHANK" is really, really, really NOT the appropriate sound effect: 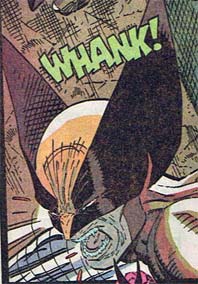 On the other hand, maybe that's why Wolverine's head wing thingies are standing up so tall and straight. 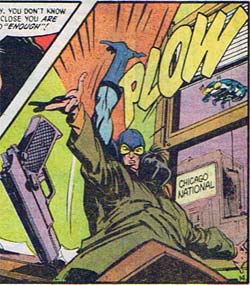 The sound of yellow

My first guess upon hearing "tinkle" in a bar where two men are about to try and kill each other would be that I'm experiencing the sound of someone about to need a new pair of chaps, but I'd be wrong: 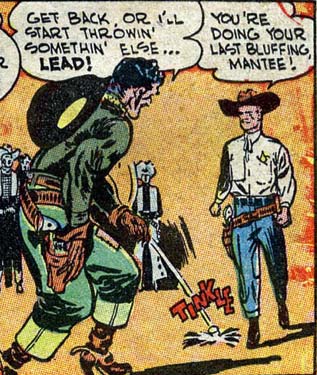 I don't care how much fine china he hurls, there's nothing scary about a man with feet that small, stuffed into high-heeled cowboy boots, mounted by highwater, rolled-cuff blue jeans. Combine that with a "threat" to "throw lead" with, one assumes, the same limp-wristed lack of athleticism as the glass in question, and I think involuntary bladder-loosening is the last thing we have to worry about. Laughter, yes. Wetting pants with a "tinkle" sound, no.

Apparently either sounds were a lot more muted in the 1940's, or they hadn't yet invented the exclamation point, or sheriffs just didn't hit very hard. Whichever it is, something is definitely up with this image: 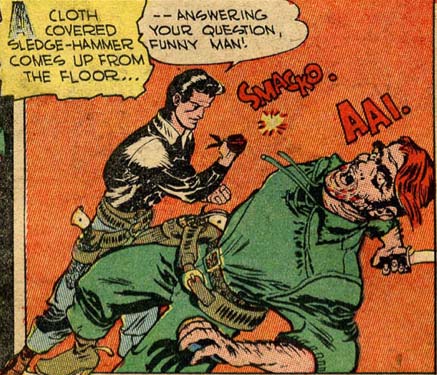 I love everything about this panel, from the awesome dialog ("A cloth-covered sledgehammer comes up from the floor ..." -- what the hell was his fist doing on the floor?!) to the look on the face of the outlaw, to how the sheriff guts out his apparently broken and/or dislocated shoulder to deliver a punch. And all done without the need for an exclamation point! I mean, come on, I've used two so far just in this one post, and yet you can cold-cock a guy into bug-eyed, broken-armed, raccoon-mascara-wearing submission without even getting out of a declarative mode.

Regardless, it makes for a very surreal visual. You've got this very savage beating taking place, but the onomontoPOWia makes it all seem very genteel, as if they'll retire to tea and crumpets after the blood soaks into the sawdust. Just awesome.

The panel is from Avon Comics' 1947 comic, "Cowpuncher" #1, courtesy of the awesome "Golden Age Comics" site. I've been having a blast going through these old issues from the dawn of comic books' exploding popularity, before the Comics Code Authority intervened to put a bullet through the medium's head. They've got romance comics, war comics, talking animal comics, pirate comics, cowboy comics, you name it and you'll find some really cool examples of the genre. It's fascinating to immerse yourself in this era of the medium's development, and to appreciate just how pointed the visual language has gotten in the intervening sixty years.

I'd write more, but I have to go outside and practice punching things with a period instead of an exclamation point. I just hope I don't have to dislocate my shoulder to get it done.

I don't know what in the heck Jim Starlin was thinking with this sound effect: 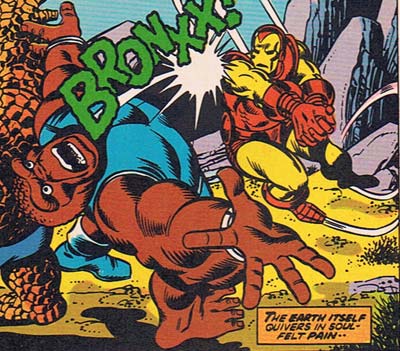 I believe I'm on record as being opposed to onomontoPOWia that are nothing more than common English words used as sounds, but this is easily the most egregious and least effective example I've seen to date. Come on, The Bronx isn't even a city, it's just a borough, you know? If you're going to hack your way out of coming up with an actual effect, at least go for something incorporated.

Plus, it's a crappy sound effect. When a guy with metal fists hits a giant hairy gay ape-man/galactic vampire from outer space wearing a sporty blue cloth tunic, the sound you'd get would be nothing like "BRONXX". Off-hand, I can't think of anything that would make that noise, to be honest. If you're going to lame out with a city-based word, right here in Texas we could offer him "meXIa!" or "BANGs!" or "FROGNOT!"

I have to be honest with you, I'd love to see a comic book use "FROGNOT" in some way. Villain name, onomontoPOWia, the call sign for Wonder Woman's invisible jet, I don't care, just give me some Frognot!

Art Adams can flat out draw, folks, and what's more is, he understands how to draw for comics, a skill set that's unfortunately rare even among professional comic book artists. I was lucky enough to pick up the first issue of his creator-owned series "Monkeyman and O'Brien" recently and every page is just jam-packed with the kind of hyperkinetic, frenzied, fun, sharp layout that you can only find in truly accomplished super-hero titles. I want to do a full retroview of it on Saturday, but in the meantime I'm going to focus specifically on how well Adams understands and uses the power of onomontoPOWia to enhance his storytelling.