I don't want to sound like an Anglophile here, but dizzam this is some funny stuff! 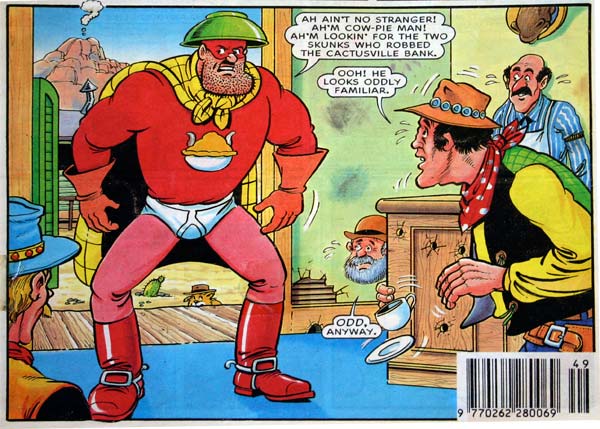 While many of our Bad Costume entrants are seriously lame, Cow-Pie Man is humorously bad on purpose, in the process showing what a Bad Super Costume means better than words ever could. The underwear on the outside of the pink baggy leggings, the bowl on his head, the towel, and of course the name which, logo of a big pie of meat and horns notwithstanding, in the actual American West means a steaming pile of manure, all force me to conclude that this character is Grade A Awesome.

I tip my hat to you, British Isles, for once again proving that you are second to none when it comes to humor. I look forward to the day when an American film company will option the rights to this character, change his name, make him serious, cast Will Smith in the role, and spend a hundred million dollars to produce an overwrought, incompetent, uninteresting bit of pablum that completely loses everything fun in the original.