Because names can suck too

"Bad" comes in many guises, my friends, and while I have done my part to expose badness as it relates to super hero costumes, and super hero comics artists, and comic book sound effects, I feel another vital area of the genre has gone uncritiqued for far too long-- names.

Thanks to reader PCFDGrey, I remedy that oversight now by presenting you with this young lady: 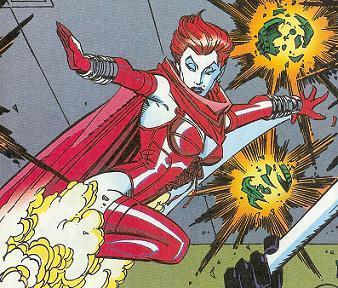 I can tell you that I, for one, would not want to face this lady even if I were the Avengers. And if they know what's good for them, neither would the Avengers! Just run, far and fast.

The only thing that could make her even more offensive is if she only has her powers one week out of every month. That would be truly epic.

12 Responses to Because names can suck too