I have just uploaded the "ItemRight-Blunts" set to the HeroMachine 3 Alpha. Here's a screen grab of one of the preview screens for the new items, including "Bonebreaker", the prize for Silent Bilbo's Character Contest 5 winning entry: 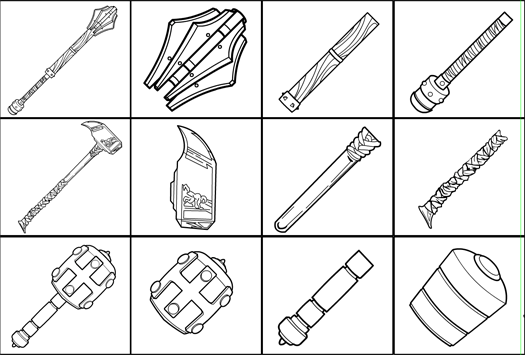 As you can see, I tried to break each item up into four parts where possible, like in the first two rows. You have the entire item assembled, then just the top part, just the middle, and just the bottom. Sometimes, like in the last row's short mace, you can only get the whole item, the top, and the bottom. In those cases I included an extra head, usually, that you'll have to assemble yourself with the shaft.

Other times, particularly at the end, each item was just a one-off, not broken up.

Let me know what you think, any bugs you find or items you want to add, etc. I went through all the suggestions in the last thread and included a lot of them, but a surprising number were actually axes or swords or whatnot.

Next up, guns! I think we've got enough potential firearms to break them up into several sets, starting with Pistols and then Rifles, and then probably general Big Modern Weapons like flame throwers, missile launchers, etc.