I've just posted the Shoulder-Standard set of items to the HeroMachine 3 Alpha, with 59 mostly-new (including some from the Lordi version) illustrations including the following sample: 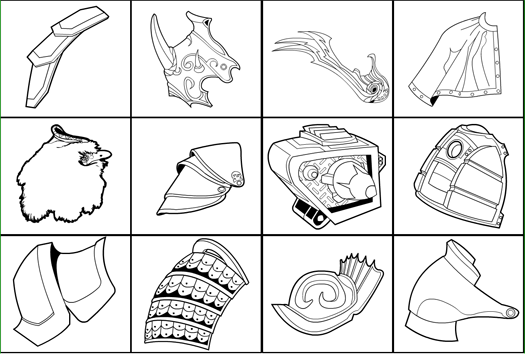 I tired to include a good cross-section of high-tech, fantasy, and modern items for your creative pleasure, hopefully they'll help make your characters closer to how you envision them in your mind.

Holler in the comments if you see that I've missed something egregious, or if there are any bugs that are getting in your way.

I believe -- and please, correct me if I am wrong here -- that this completes all the "Standard" items for the male figure. Which is pretty amazing when I sit back and think about it. It might not seem like it, but believe me, after two years of working through the Expansion for 2.5, and countless custom versions for Sales, and all the other stuff, once I got to sit down and actually work full-time on HeroMachine 3, it's come together at a rapid pace.

I posted "HeroMachine 3.0 Begins" on January 19 of this year. In just three and a half months, you have a functioning (if somewhat buggy) version in your hands with a full set of basic items. And as you have seen in the various "Cool Characters" posts, people are doing some amazing things already.

I want to be sure you understand how important everyone who has taken the time to comment on the program during this development period has been. Many of the items and features you see are directly attributable to input from someone in the community here, which I think is just fantastic. So thank you, very sincerely, for helping this application come to life at all, much less to be as awesome as it's turning out (he said humbly).

Not that we're done -- not by a long shot. I haven't done an actual count but I would guess there are probably three times as many more items just to convert from 2.x, not to mention any new stuff that gets added. That's a lot of drawing. Plus the female body template (which I've contracted out by the way) and the conversion of any gender-dependent items to fit on it. And all the feature enhancements and bug fixes.

In other words, we're a long ways from done. But not as long as we were three months ago, when this was just an idea.

Thank you for following along thus far, and I hope you'll be sticking around for the next few months as this thing eventually leaves alpha and goes to beta, and then to a full, formal "final release". It should be fun!

39 Responses to HM3: Shoulder to shoulder