Well, since this isn't a countdown to Con anymore, Halloween is the next best thing! Progress report below!

This is my younger spawn's costume, Black Panther, but in pink. Main progress so far has been on the helmet.

This is what we started with: 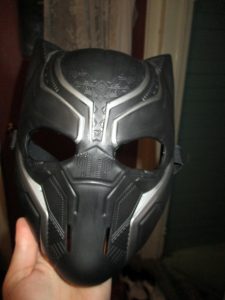 Just your average, ten dollar kids' mask, nothing too fancy. First thing was to give it a quick wash in warm, soapy water to get any factory schmutz off, and then primed black all over. 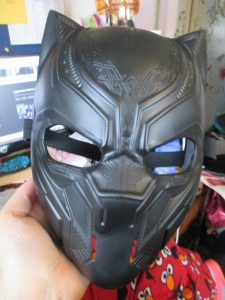 Then on to the paint. These were the two paints I used. It was 5:1 (light:dark) ratio. I also started that way with paint to water, but quickly moved that to a 3:1 for better coverage. 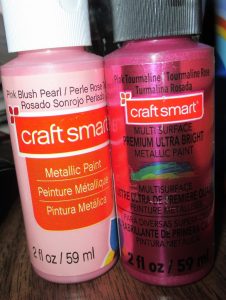 After the first coat: 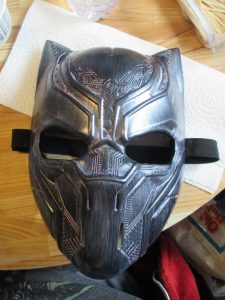 I used a foam brush to try and avoid too many brush marks. 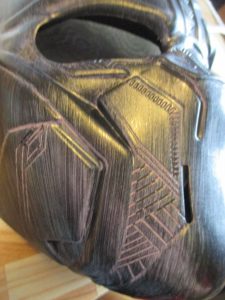 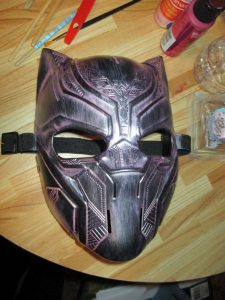 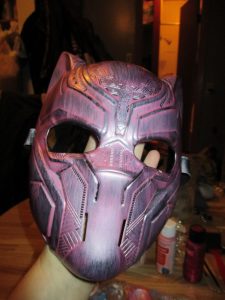 I did about 6-8 coats in total. I actually lost count as I was painting while watching the local election forum, but it was about eight total. 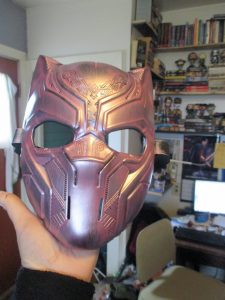 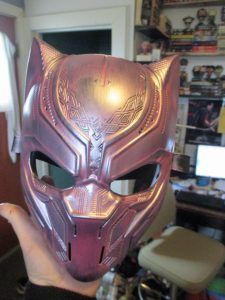 Trying it on for good measure. 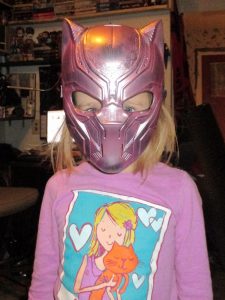 It just needs details now. Silver in a few spots, and I'm going to try some glow in the dark in some of the forehead and cheek etchings.

I'm still working on making this happen. It's a long haul, but version 1.0 should be ready for Halloween.

Bracers- are done now apart from weathering! A small elastic strap was added to the hand plate and a larger one across near the elbow on the bracer. The brown strap at the wrist is velcro, and keeps the whole thing on. 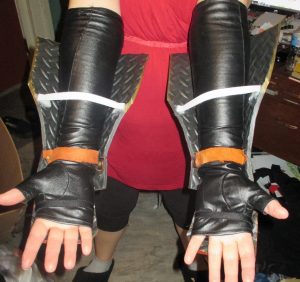 The leather-ish under-gloves are actually enjoying their third costume outing. Originally, I bought them for a custom-costume Mileena from Mortal Kombat. Then I used them for Loki (another original costume, this one closer to a closet cosplay). They also went to a Judas Priest concert. Doing pretty good for themselves for five bucks off ebay. 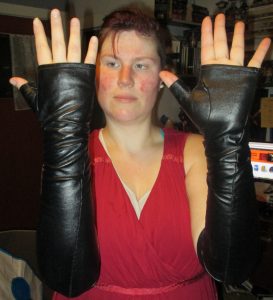 Chestplate- This has been the biggest project of late. I had put it aside due to some issues with fit and flexibility, but I think I've figured it out now after some additional research. As far as fit goes, I put the pieces on and had the other half trace out where I needed to trim. As for flexibility, I’ll get to that.

So the back piece has some material added to it for what I intended was a way to tie the two sides together. Add some grommets, good to go! 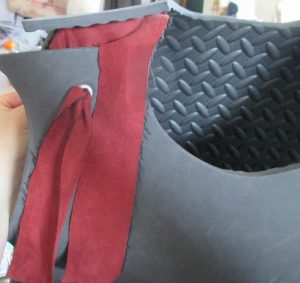 The front plate was cut down from full coverage, but now I cut off the bottom piece and then riveted it together again with elastic bits in between. 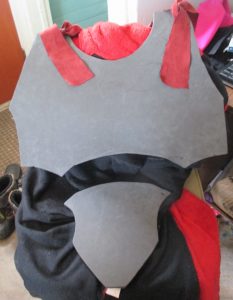 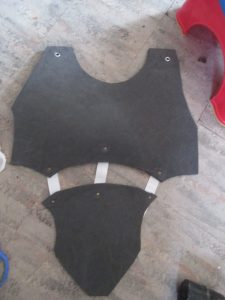 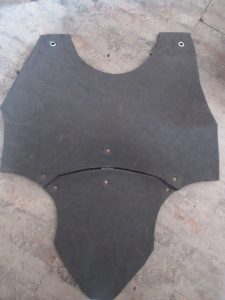 Sides were measured and riveted to the back plate. I suppose should mention that I chose rivets for this part of the project for strength. I don’t want any glue or anything letting go under stress from moving, etc.

So now I had this. 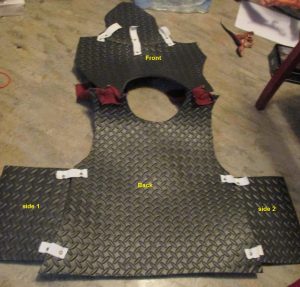 To attach the sides to the front I took an old, stretchy belt with snaps and cut it in half. One side of the snap was attached to the front, the other, with the material attached was added to the backplate. Voila! We have a chestplate! Well, the rough form of one, at least. 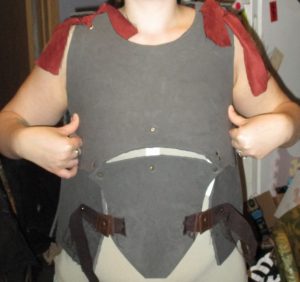 Still needs a couple of adjustments....

Helmet- There’s been a change of plans for this. Originally, I wanted to do the big, horned helmet my Barbarian currently wears. But, we’re in a time crunch (added to this also: work, going to the gym, and a massive house re-arrange). For the sake of my sanity, I decided to do something different. I, on a whim, searched for crowns and just happened to find this: 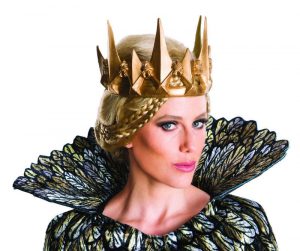 It’s from the Snow White and the Huntsman movie, which I haven’t even seen. But, it’s almost a dead ringer for one of the early in-game legendary items that everyone gets for killing one of the first big bosses, the Skeleton King. I don’t have a picture of my Barbarian wearing it (was still on the 360, so no screenshots), so here’s Delilah the Crusader rocking it. 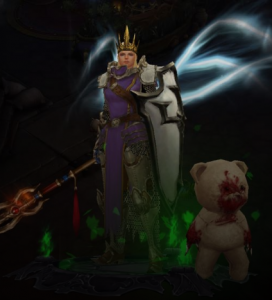 I couldn’t not buy it, and especially given the time crunch I wasn’t going to wait. Thankfully, it’s only shipping from Ontario, so with the expedited shipping it should reach me here in Manitoba pretty quick. So version 1.0 is going with a Leoric’s Crown, which is okay too because now that I won’t have so much helmet covering my face maybe I can look at some prosthetic wounds or scars or something to give me that real battle-hardened look.

Well, if you made it through all of that then I congratulate you. That was a long one. So I’ll end it quick by saying happy weekend and we’ll see you next time!

This entry was posted in Fantasy & Sci-fi and tagged 2018, cosplay, costume, Halloween. Bookmark the permalink.

One Response to Countdown to Halloween!