I just had to share this will all of you. After a number of teasers popped up Tuesday, we were told that a full trailer for what will probably be one of the most anticipated movies of 2017 would be debuting Wednesday. I speak of course, about Geostorm. Yes, that weather-disaster thriller brought to us by Dean Devlin and starring Gerard Butler (why do you keep doing this to me, man?). Also, Jerry Bruckheimer and another director, Danny Cannon is involved too. It’s kind of complicated. But on to the trailer.

Now I just want to give some quick thoughts here. Firstly, the last disaster movie I actively watched was The Day After Tomorrow, so I’m a bit out of the game as far as these go. But this trailer was hilarious. It had everything: big, over-the-top set pieces just bleeding CGI all over, ridiculous premise that could probably be a lot more interesting if done more intelligently, a classic song done in an overly slow and melodramatic way… I could go on! I mean, it seems like they hire the same woman for every one of these trailer songs nowadays, so I guess she’s got a good thing going at least. To be honest, I thought the teasers (which I conveniently watched in one video) were a lot more intriguing and interesting than the full trailer. The viral/found/secret-government- footage quality of the teasers gave the clips a little extra something, a Cloverfield-esque feel that is probably better than it deserves. The trailer, in contrast, was just every trope of the genre and what you’d expect of a Devlin, Emmerich, or Bay film mashed into one big pile. Let’s be real, this movie is probably going to be terrible. Amazingly terrible, even. What we see of the effects are the same glossy, over-the-top kind we see in all of these kinds of films and which after a while just sort of runs together. 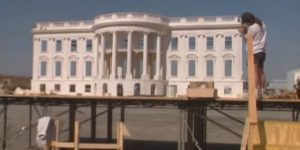 I miss the days of blowing up tiny White Houses

We’re pairing that with what looks like some dramatic family issues crammed in the corners to pad it out. There’s the usual ex-wife, a kid, a brother, all that good stuff which I’m sure will be integral to the story. And, as bad as this is probably going to be, some perverse part of my mind wants to see it in all its terrible glory, Gods of Egypt style. Or maybe I’m just a little loopy from digging ourselves out of the massive blizzard that just blew through our part of the world. 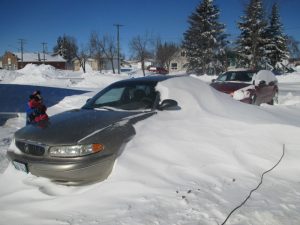 This was my car this morning. There was also a second drift on the other side.

Either way, we’ll see what happens come October. Our next film is Kong: Skull Island, hopefully this weekend as long as the weather cooperates. So I’ll see everyone then!

This entry was posted in Movies and TV and tagged bad movie, movies, reviews, trailers. Bookmark the permalink.