What Were They Thinking?: Wholey Terrible

So, two weeks ago on What Were They Thinking (the place where we take a look at all of the stupidest, most ill-advised things in comics history) we covered a lovely little Batman story called "The Widening Gyre" (I still have no idea what a gyre is nor why one should be getting wider). In that story, the writer quite literally takes a piss all over Frank Miller's seminal Batman Begins story. Now, that got me thinking. We've already covered Frank on WWTT before for his more recent Batman storylines, but Frank is a very prolific writer and has written some true masterpieces in his time. Surely, those two Batman comics can't be truly indicative of his work post-millennium can they? 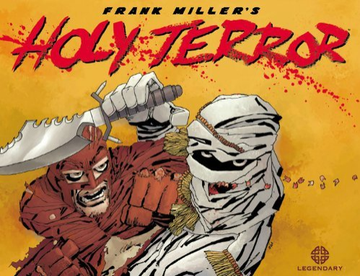 Why do I get the feeling that this weeks WWTT is going to be unintentionally and strangely topical?

Anyway, what we have here is some Islamophobic propaganda. I mean, there's no point beating around the bush, that's what it is. It neither hides its obvious prejudice nor makes any bones about it. Even Miller admitted that the whole purpose of the comic was to anger people. Of course it was universally panned, with critics denouncing it for grouping all Muslims together as terrorists based on the actions of a minority, which is a bit like saying that all white people are in the KKK or that all black people are inner-city thugs and gang members or that all Mexicans are criminals. You know, massively negative stereotypes and racist views that no-one in their right mind would agree with. Plus of course it's full of the standard Miller trademarks, fetishization and degradation of women and the ultra-violence that he loves so much, at this point tipping over to what is almost self parody. Oh and if you're thinking that the art might be a redeeming feature (because Miller's comics are often given fantastic stylised art)... yeah it looks like this:

I guess he was going for the Sin City effect but forgot how to art whilst doing it.

Ok, so, I might have started this whole story at the end rather than at the beginning. One thing we should all be clear on before we go any further is that Miller originally pitched this to DC as a Batman vs. Al Qaeda story, titled "Holy War, Batman" as a play on Burt Ward's iconic "Holy___ Batman" catchphrase for the 60's TV show. Now, we'll just take a moment to see what Animal Man/ Batman/ New X-Men/ JLA writer and fellow comic book legend Grant Morrison had to say about that whole idea:

"Batman vs. Al Qaeda! It might as well be Bin Laden vs. King Kong! Or how about the sinister Al Qaeda mastermind up against a hungry Hannibal Lecter! For all the good it's likely to do. Cheering on a fictional character as he beats up fictionalized terrorists seems like a decadent indulgence when real terrorists are killing real people in the real world. I'd be so much more impressed if Frank Miller gave up all this graphic novel nonsense, joined the Army and, with a howl of undying hate, rushed headlong onto the front lines with the young soldiers who are actually risking life and limb 'vs.' Al Qaeda"

I mean... pretty much. And this is coming from a guy who decided that he'd make a very good God, so wrote himself into one of his own series as such, and he thinks you're writing nonsense.

Fortunately, Miller realised that the storyline wouldn't work. But unfortunately, he decided to change the main character to a hero of his own creation so that his protagonist wouldn't have to stick to Batman's moral code (not that Miller has ever really cared about Batman's moral code: see our last WWTT on Frank Miller) rather than just, I dunno, scrap the whole thing all together. It was around this point that it was announced that DC would no longer be the publisher. No official reason was ever given and Miller claims it was because he wasn't using Batman any more. However, I have a sneaking suspicion that someone at DC read it and had an attack of the common sense (a rarity at DC I will grant you, but there is a possibility that someone in those offices does have one. Just one common sense mind you, we don't want to go overboard).

At this point in our story the comic is now finished and awaiting its release. Now, can anyone imagine the most inappropriate time for such a comic to come out? How about the 28th of September 2011, 2 weeks after the 10th anniversary of the 9/11 attacks. It was intentional of course, to get the book publicity (in fact, I wouldn't be surprised if Miller had tried to get the book out on the 11th but wasn't allowed by his publisher or distributer), but come on dude. Really? NPR (National Public Radio) even gave him a slot to advertise his comic on 9/11/11, which is in very bad taste IMO.

So, Frank, if I can be frank a second. Well, obviously, you're Frank, so I don't want to be that Frank, I mean, if I can just speak my mind, that connotation of "being frank". Definitely wouldn't want to be you, you're mental. But yeah, if I can just be frank with you for a second. Just stop. It is time to stop! You still have an enormous amount of good will from the community thanks to your work in the 80's. Nobody is saying that your run on Daredevil was anything but the best thing to happen to the character. Nobody is questioning that The Dark Knight Rises and Batman Begins are two of the greatest, if not the two greatest, Batman stories ever written. And nobody is arguing that Ronin isn't possibly the best stand-alone action comic of all time. Even your works in the 90's are highly regarded (even though some of you more, how can I put it, difficult eccentricities started to show in very obvious ways), Sin City is pretty much a masterpiece and 300 is amazing. But since the year 2000 all you've done is use your legacy as a latrine by producing works that are offensive, badly written and badly characterized. And not only is it worrying, it's also kind of sad. Watching someone's slow descent into madness isn't amusing or entertaining, it's pitiful. And that's what this is Frank. Holy Terror may be offensive. It may be nasty, hate-filled bile that takes a very narrow, negative view on a huge group of people. It is all of that, but above all else, it's just pitiful. I don't hate you for writing this. I pity you. I pity the mad, raving, senile old man you appear to have become. Just stop now please. This is a personal request. Please.

8 Responses to What Were They Thinking?: Wholey Terrible