First, a bit of embarrassing math-related record keeping -- the original contest post said this was Character Contest 55, but it is actually Character Contest 56. My apologies; I claim a dual art and English degree as the culprit. Also too I am a number idiot.

Now that we have that out of the way, let's move on to the fun stuff, our Finalists!

First up is Amaranth's "Serpents of the Sand", which I liked for the nice environment and the way the lower body seems shrouded in sand. 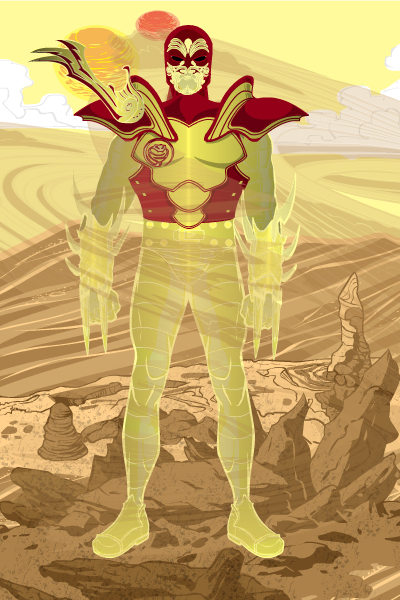 I loved the stance on AMS' "Robot Henchmen". The setting is great, the color scheme tight and pleasing, and the glow effects on the guns are perfect. Leaving out the colored sky and leaving just the buildings against the white background works really well, also. 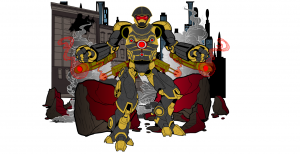 BakerDoc gave us the "KKKK Soldiers", front-line troops of an alternative timeline hate group. I like that he kept elements and colors from the real-world group but incorporated enough new elements to modernize it. The biker pants in particular nail the effect, while the gun gives just enough future-variance to it to spike interest. 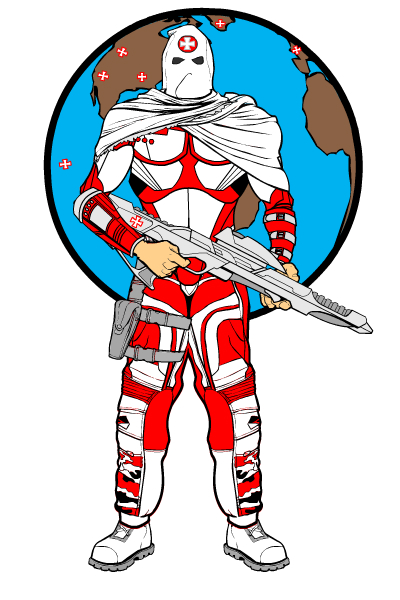 Frevoli's "Ophiuchi" serpent-themed henchman looks the part, especially with the logo instead of a face. That's creepy. I can totally see Cap or some other costumed do-gooder wading through these guys like a threshing machine, sending severed staffs flying left and right. 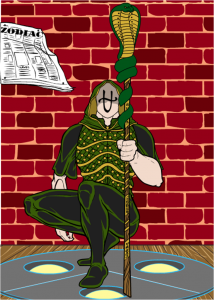 I really dig Hero of Wu's henchment. They've got a very classic Nazi style vibe to them, but with enough differing elements to make them his own. Very menacing and again, a great look for guys destined to get the snot beaten out of them. 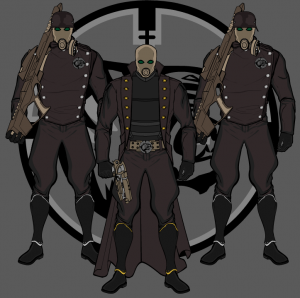 I wanted to give Iflyte a nod for doing a bang-up job with his battle-torn setting in "Oni". Something that elaborate isn't easy to pull off and it looks really good. 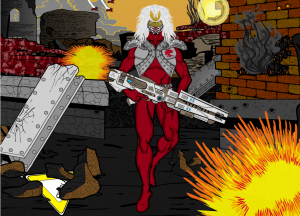 Imp's entry just made me chuckle: 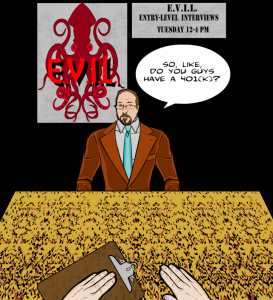 Knitesoul's "Wings" has a fun, whimsical, and yet scary aspect to it that I liked very much. 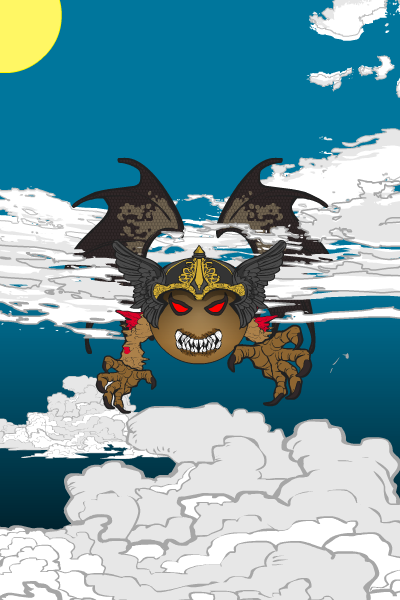 Kwnos had four elementally-themed entries that were all quite good; I chose "Roveo" to serve as the example but they're all well worth checking out. 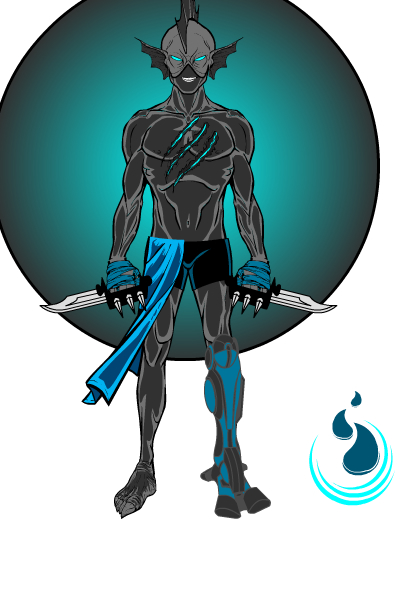 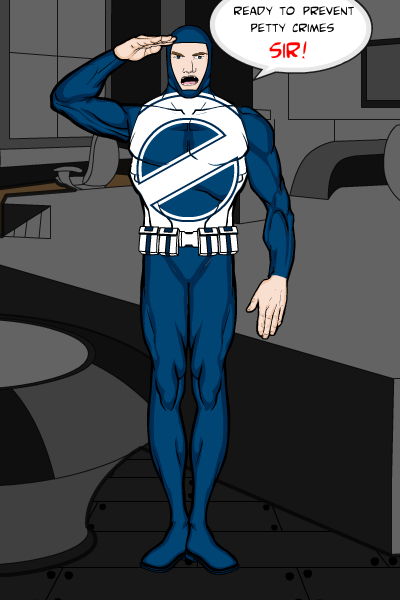 MSCat gave us the "Rag Tag Team", who would look right at home backing up the Joker or the Scarecrow or any mildly psychotic bad guy. 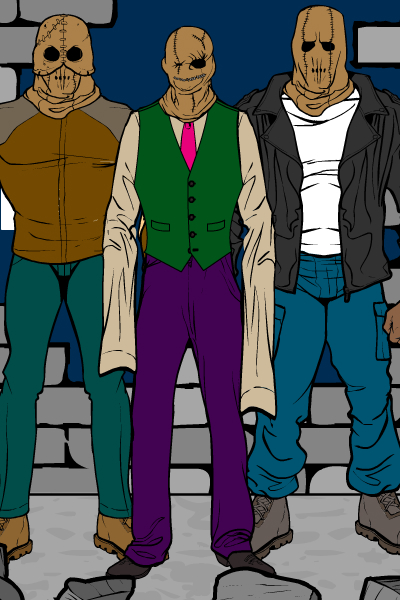 What sold Myro's "Cannon Fodder" to me, frankly, was the expression of the guy on the right. He's all "Wait, you're gonna hit ME?!" Love it. 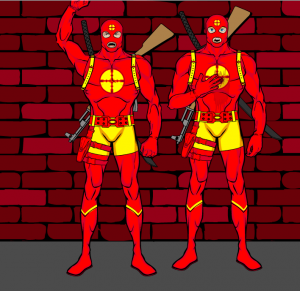 Nakiato made what I thought was a very clever use of a breastplate as a helmet in his thought-experiment about what The Punisher's henchmen would look like: 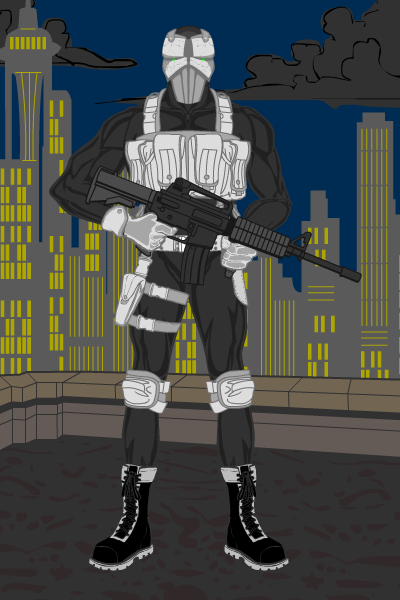 PapaKrok's "Henchmen Tribute" captures the very essence of what it means to be a henchman. He even wrote a stirring tribute in words that I think is well worth reprinting:

Here’s to you, loyal henchman. For precious, oblivious optimism in the face of certain annihilation and personal injury. For the boredom filled days, occasional hard work, global mentality and side splitting, pummel-filled moments. The comic world wouldn’t be the same without your selfless, outmanned, under skilled, outgunned sacrifice. Salute!!! 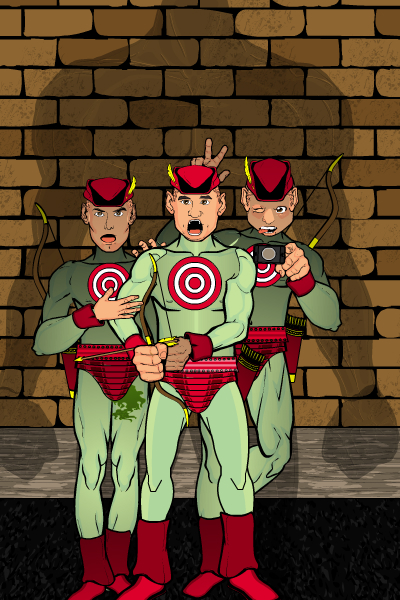 He also submitted a wickedly cool looking concept, the Sede. As he says, "Sede are the evil offspring and servants of Gordian-Rot. They crawl from spore pods hidden within the rotting cavity of his body and are inexhaustible in strength and number as long as their parent-host remains viable. They, like most nasty evil creeping vines, choke life and property into oblivion if left to their own devices." Awesome! And the visual is just as good, maybe better: 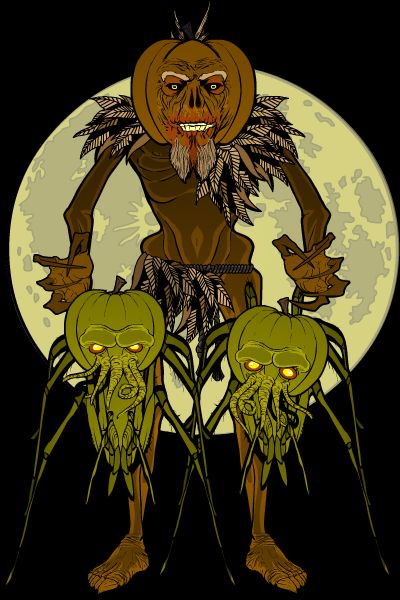 Pesky's "Parabots" for me nail the whole concept of uniformed, front-line cannon fodder types of guys. They look cool enough on their own, but you can tell that they're part of a larger force. I think using the camo pattern on those legs was also a very clever way of making them look distinctive given the limitation of both legs being together. 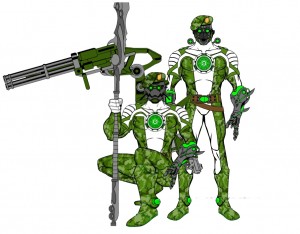 Rancid's "Prime-apes" is both punny and cool, my favorite combination. 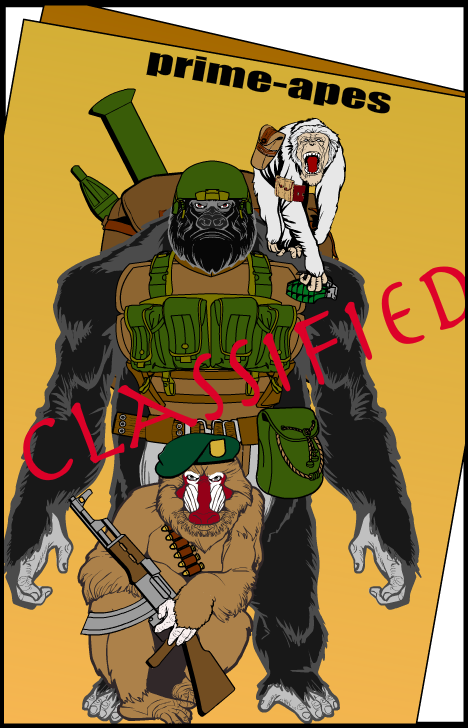 I wanted to highlight Rhinoman's "Smokey of C.A.T.S." mostly for the great use of setting. The blobby ground with the rock guys coming up over the horizon is great -- that little addition of figures below the horizon really nails the whole figure-ground relationship. Then the white background with the planets floating in it does the same thing. Simple but extremely effective. 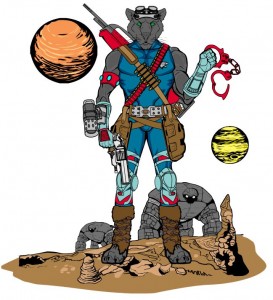 Spidercow2010's "Henchtemp43" is both clever and features some really nice smoke effects for the setting. I particularly like the arrows pointing to his crotch, as if to say "Kick here". Too funny. 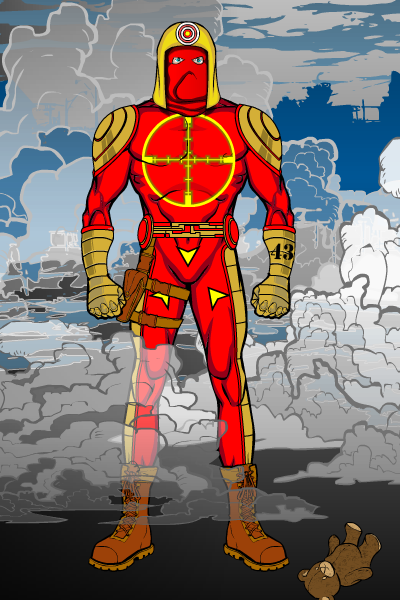 I love Sutter Kaine's "Cyberninja". The light gray outline of the clothing, with the black highlight, and then the medium gray interior, is a fantastic look. The glows in the blue bits are a small detail that helps enormously, and the face is really well built. Just a great design all the way around, perfectly accented by the color choices. Great job on this one. 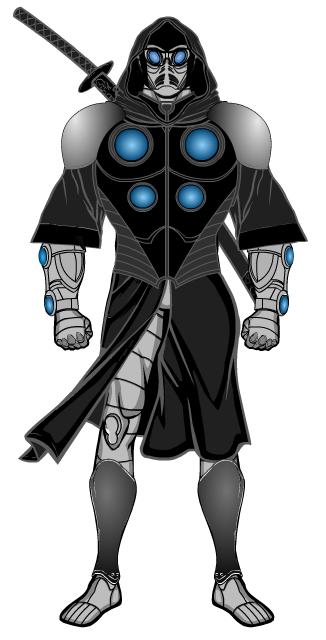 So out of those, the ones that were sort of in my "final cut" were BakerDoc, Frevoli, Hero of Wu, Kwnnos, PapaKrok for the Sede, Pesky, and Sutter Kaine. I had to go through and carefully think about what it was I wanted to go for in this contest, the whole idea of a faceless soldier on the front lines of a major organization. I love the spooky imagination of PapaKrok's Sede, those things are downright creepy! But then I thought maybe they were too much like mindless automatons and less like what I think of as a "henchman".

Pesky's Parabots are probably the best purely soldier submission, but then I thought, well, they're maybe TOO soldiery.

I love Hero of Wu's guys, they look like they could come right out of a B.P.R.D. sketchbook. But then I thought, well, maybe they're too much like Nazis.

So at the end of the day, I ended up deciding to award the overall win, despite incredibly stiff competition from those I just mentioned and many others, to BakerDoc for his KKKK Soldier. And the reason is that I think he did the best job taking something we all know, and then elevating it to a distinctive yet still recognizable plane. Plus, they look like they'd be pure fun to beat the hell out of, which for me is the hallmark of a truly great henchman soldier design.

So congratulations to BakerDoc! Let me know what you'd like for your prize and I'll get on it.