The entries for "Character Contest 35: Road Warrior" were oustanding, thank you everyone for putting up such excellent illustrations! I really think you outdid yourselves this time around, so I've got a bunch of Finalists after the jump. Even then, I left out quite a few more that I think were also great, so this is definitely a week you could go through the comments manually and check them all out.

Before we get into them all, though, I wanted to start out with one that made me both laugh and wish that there were a movie or comic in the works for the featured character. I think it will get things off on the right foot, so I turn it over to Ian Healy's "Undead Elvis of the Apocalypse":

And away we go!

Alex's "Walker" is very well put together, and stands on its own even without any sort of background. I liked the scarf with the embroidered looking logos, the mouth wrap, and the tattoos particularly. 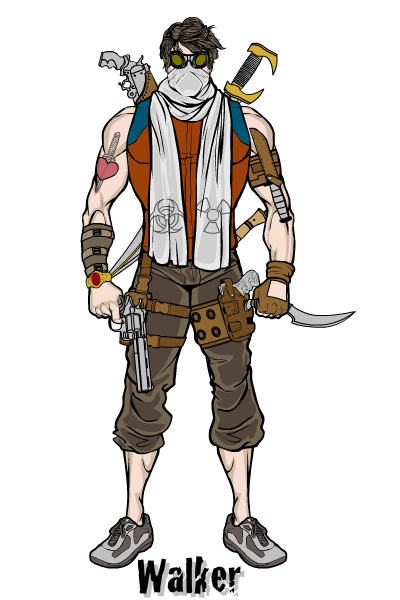 Coyote's "Creature" kicks butt, and the overlay of the city background on the web works great. 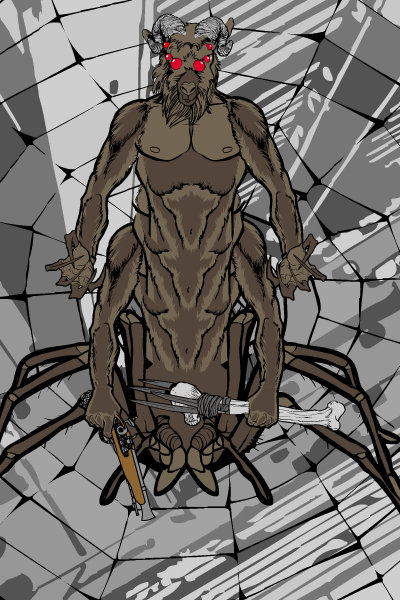 Another entry in the "Creature" column is Decolda's "Tank'ed", one of the most impressive chimera-like creations I have seen to date, it has a real sense of menace and presence about it. 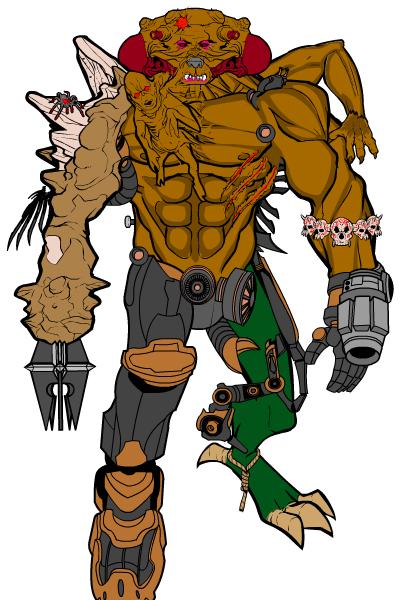 Doomed Pixel nails the whole holocaust vibe with his "Scavenger", especially the Aztec calendar in the sun and the streaking fireballs. 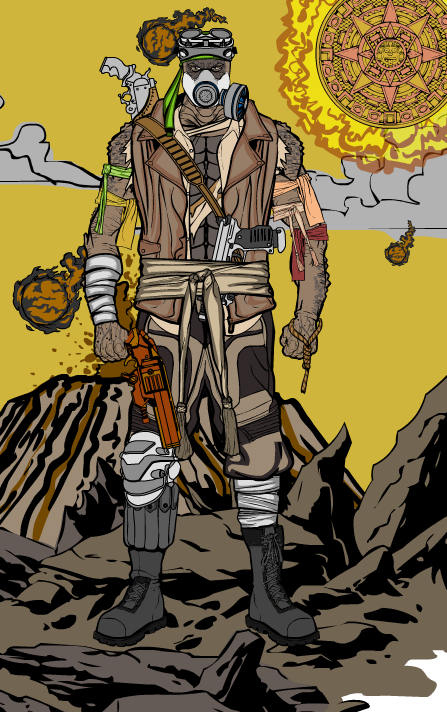 I liked all three of E_N's related characters and their stories, but ultimately I chose "Radd" not only for the overall effectiveness of the composition, but particularly for that awesome cleaver staff. That's the exact kind of thing I'd love to see in a post-apocalyptic scene, I just love it. 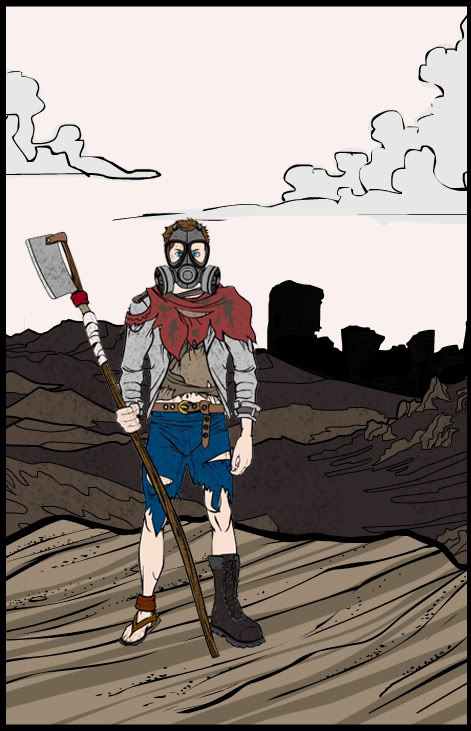 Felipe S. Card's "The Outlander" was the first one I came to that made me give an audible "Wow!". He's got a real Jonah Hex by way of Mel Gibson feel to him, especially with the robot arm and half metal face, cowboy hat, and rifle over the shoulder. 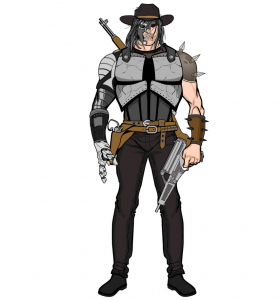 I liked these two Gargoyle323 characters so much, I couldn't decide which to include. So I am using them both, sue me! They both ooze personality (literally, I suspect) and while the color scheme is the kind of thing that would usually turn me off, it works here. Outstanding work. First is "Big Bang Benny", then "Happy Jack". 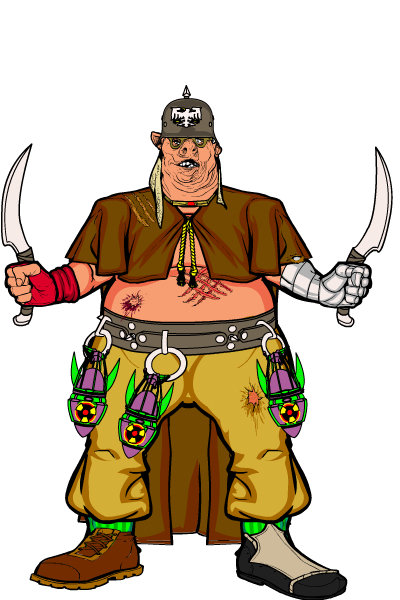 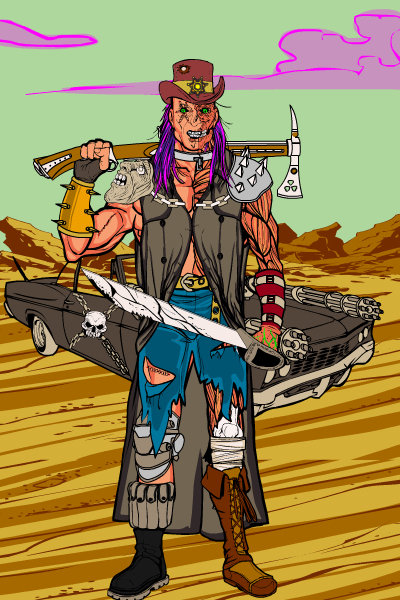 I love Imp's use of the motorcycle here to infuse the composition with life and oomph. The character's pretty great, too, and then the name just brings it all home. Here's "Chief Quickdeath": 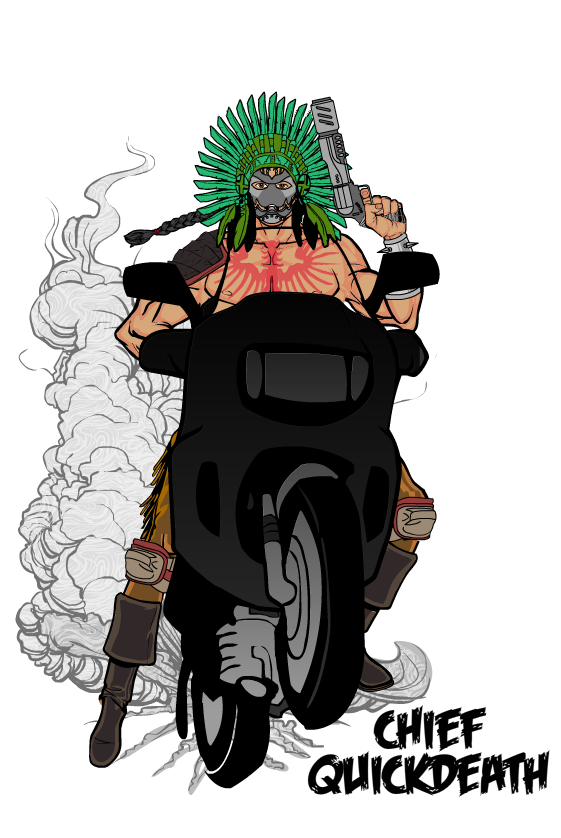 Nathan said he didn't have any story in mind, but just "threw together" all the Mad Max type stuff he could find, but you certainly can't tell there was no plan with this guy: 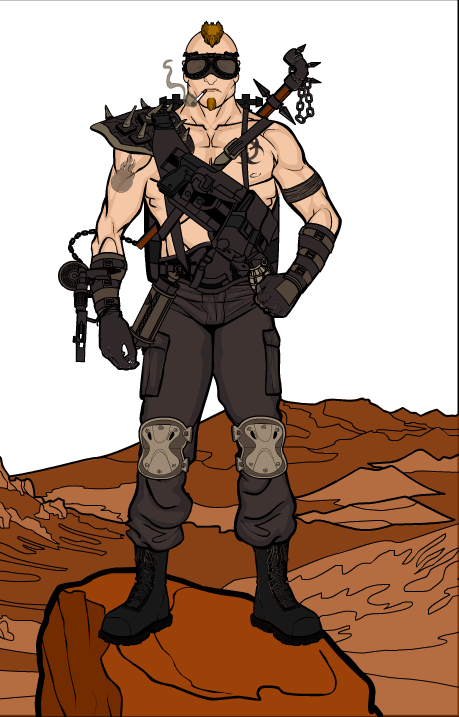 Neon Sequitur made great use of Anarchangel's steampunk guitar, with the addition of a flamethrower and a hot (again, literally) pink motorcyle for a gal you'd definitely not want to aggravate, his "Guitar Heroine". 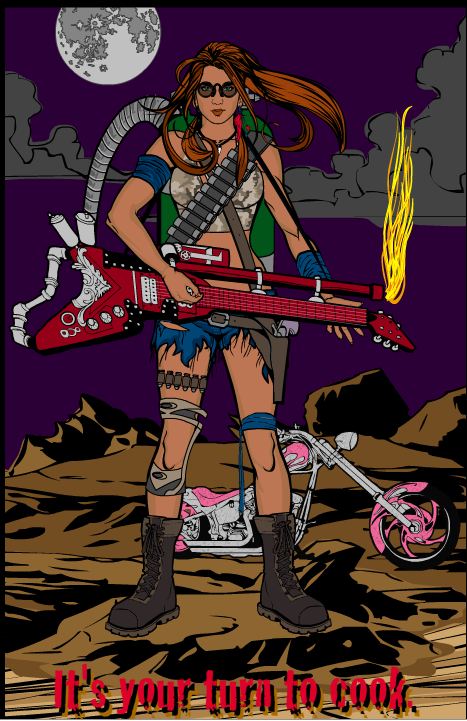 I don't think I need to say anything about Rancid's pig man, other than "Pork it up, pal": 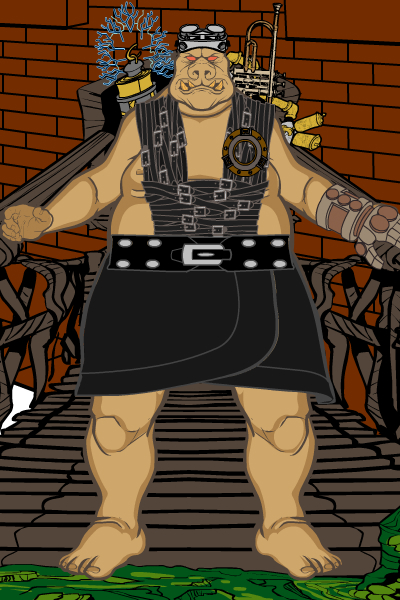 I'd say how much I like the head on Rhinoman's "The Drifter", or the nice custom weapon, but who are we kidding -- I'm a sucker for a mutant chimp. Always have been. 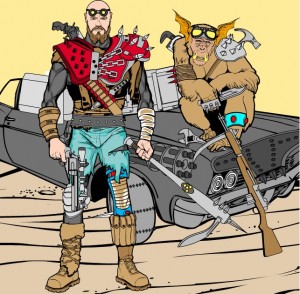 Rico's "Spyke" is a good character, but I chose it as a Finalist because of that background. It rules. Along with Doomed Pixel's, these are the best backgrounds of the contest, really selling the idea of a world after a horrible holocaust. 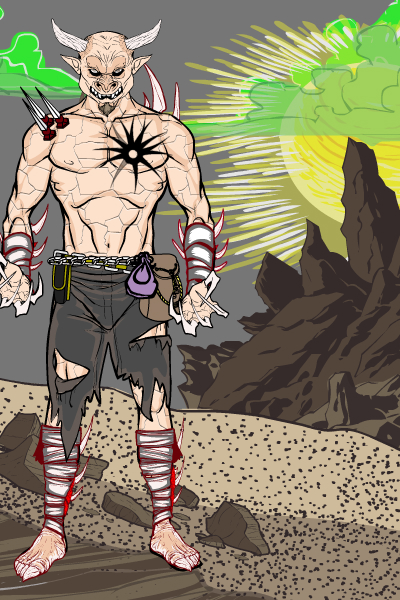 Sutter Kain's vaguely stunned "Feral Errol" has a lot of character to it, and definitely stood out from the other entries as a unique take. Not everyone gets to drive motorcycles and wear spiked shoulder pads, you know!

Which brings us to our overall winner. The character overall is strong, with all the elements working. The use of a couple of spotlight colors to relieve the brown and beige palette adds punch to the whole illustration. And I love the use of the flared coat bottom (I really need to add a version of those for Doomed Pixel's prize in the HM2 contest). The clincher for me, odd as it sounds, is the face. It's not even as if there's anything super radical about it, I just like it a lot. It says to me this is a guy who's been through hell, and come out the other end having kicked ass and ready to take some names.

I give you Bloodless Rose's "Marcus Caine": 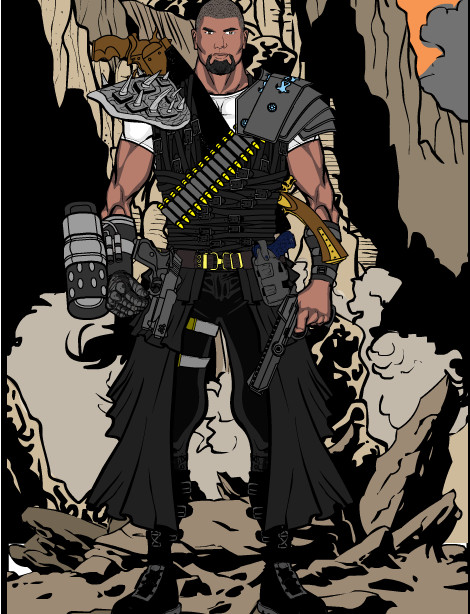 I will say this was one of the closest contests in a long time, I could easily have (and almost did!) go with any one of six of the other Finalists, but this one just hit me the right way. Congratulations to Bloodless Rose, who wins either any item he or she likes, or a portrait, to be included in the final HeroMachine 3 version!

And thanks again to everyone who entered, you all did a fantastic job.