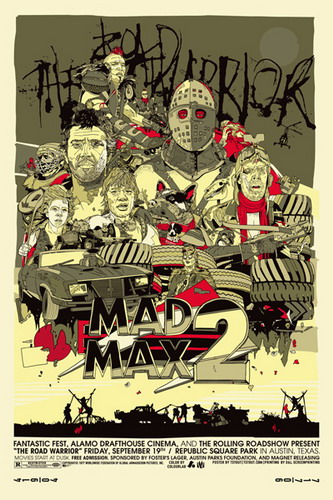 Your mission for the week is to develop the best character who would fit into a "Road Warrior", post-apocalyptic survival world (thanks for the idea, Imp!). Whoever comes up with the best design, as judged by me, Lord Emperor of ... um, this site, I guess ... will win either any item they like, or a portrait of themselves, to be included in the final HeroMachine 3 version!

The rules are simple:

The standard concept here is a gritty, gun-toting warrior type with mismatched armor pieces consisting of current-world castoffs like half shoulder pads, biker pants, etc, usually with scars or mohawks or some other kind of street-thug regalia. But don't feel like you have to limit yourself just to that, post-apocalyptic worlds can be host to some really bizarre creatures, too. Mutants from the likes of "Gamma World", if anyone remembers that RPG, or the kinds of guys you see in the various Fallout games, or escaped robots scrambling for survival like everyone else, there are lots of possibilities. So don't be afraid to be creative and let yourself imagine the kinds of beings (natural or otherwise) that would survive in such a world.