We've wondered before at how Dr. Spectro got his powers (my favorite is still "Bitten by a radioactive Christmas tree"), but did you know that he actually had an earlier incarnation as a foe of the Charlton hero Captain Atom? Don't worry though, the original outfit was almost as bad: 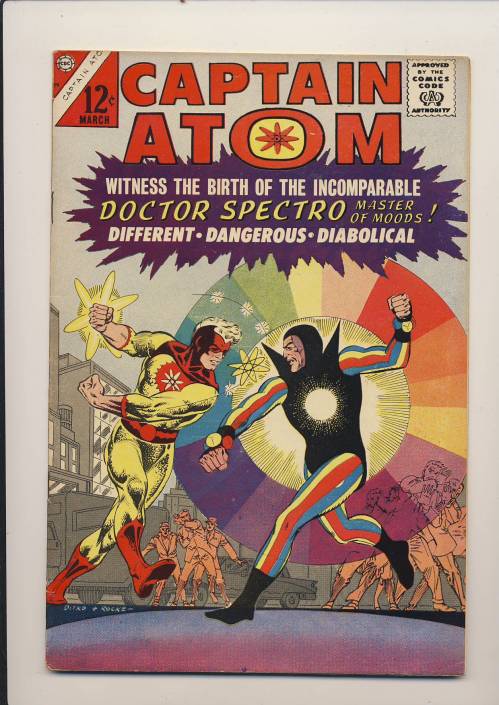 You may note that this particular comic bears the "Approved by the Comics Code Authority" seal, which I frankly find astounding. If old white men running around in black leotard tops with rainbow spandex stockings and black socks isn't against the Code, then what good was it? Surely that would be more scarring to a child than zombies or axe murderers. I have to wonder if the fashion horror of the 1970's isn't directly attributable to this appalling lack of oversight by the people responsible for protecting our children.

Luckily the outfit is saved by the combination of skin-tight skull mask and flaring epaulets and ... wow, I couldn't even get through that sentence with a straight face. Or straight fingers. Whatever, look, we're not here to parse metaphors, people, we're here to make fun of old guys in black socks!

It's no wonder he's billed as "Master of Moods" because let's be honest, if you had to go out looking like that you'd be one moody bastard, too.