I got a little carried away with the Sketch of the Day this time around, as you can see: 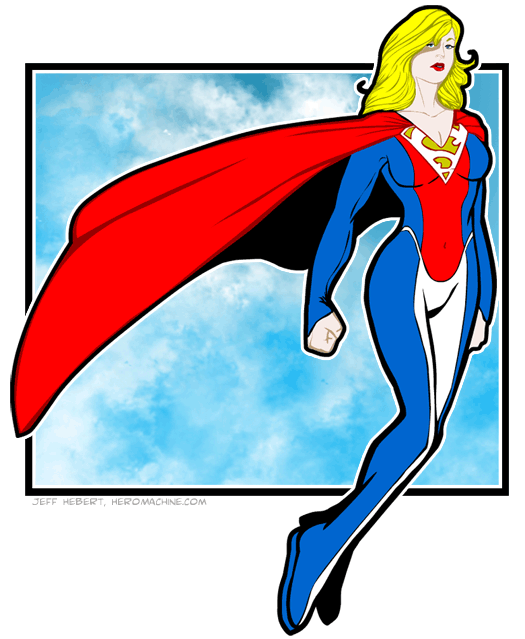 Cory Walker has been doing a new Supergirl redesign every Wednesday as part of his "Sketch of the Day" series, which is probably where I got the impetus to do this one. Originally it was supposed to just be a regular quick black and white sketch like the others, but I just couldn't leave it alone until I finally settled on what you see.

Along the way I went back through the "Project: Rooftop" Supergirl contest, a retrospective of various Supergirl costumes at Girl-Wonder.org, and a quick review of some lesser-known designs at MaidOfMight.net.

I took a slightly different tack with my attempt, choosing to design something for Superwoman instead of Supergirl. The classic mini-skirt red-and-blue original costume, its red-skirt heir, and the great Bruce Timm Animated Universe white-tee-shirt with denim skirt looks definitely emphasize the "girl" part of the character, which is entirely appropriate. Part of what makes her interesting is her youth, having these great powers while dealing with being a female child in a culture (both real-world and comics-fans) that's still very much dominated by men. A young and hip look is, I think, key to her appeal.

But I was thinking about what happens to her later, after she's no longer a teenager but living in an adult world with adult responsibilities. What would she look like then? What fashion choices would she make in her public persona, and what would they say about her personality?

I definitely wanted to keep the basic red, yellow, and blue Superman look, complete with the big chest-symbol "S". I think she'd want to continue honoring what her cousin (or whatever that relationship is nowadays) had done in the past. But, I also wanted her to keep some aspects of her more youthful look. To that end, I wanted to incorporate some white into the design, honoring her white tee-shirt.

To age her up a bit, I went for a longer, fuller cloak, as I suspect she'd be less about zipping around like a hummingbird and more about raw power the older she got. Patience for games and frippery tends to lessen over time, and I think she'd probably be a lot more direct. That lends itself to a big billowing cape that enhances your presence.

I also wanted to use the long-sleeved, long-cuffed Kryptonian element from Byrne's "Man of Steel" reboot. Something about long sleeves seems more adult to me.

I didn't want her to be completely wrapped-up, though, so I introduced a more plunging vee-neckline, sporting a bit of cleavage, cutting into the chest insignia. Not too much, though -- this isn't burlesque.

One of the major changes I introduced was to do away with the skirt. I would argue that skirt was the key part of her old costume, the main ingredient that set her apart. It might be a mistake to lose it, but I thought it was the most dramatic way to mark a departure from childhood and clearly demarcate a new phase of her life. Mini skirts are for girls out to play, not for women getting a job done.

Not that I'm against mini-skirts in the workplace, mind you. Definitely carry on with that, ladies.

However, losing the skirt made for a major problem with her waist. Namely, if you don't have anything to hold up, you don't need a belt. And without a belt, what do you do with the area of her costume normally constrained thereby? Originally I addressed the issue by ignoring it: 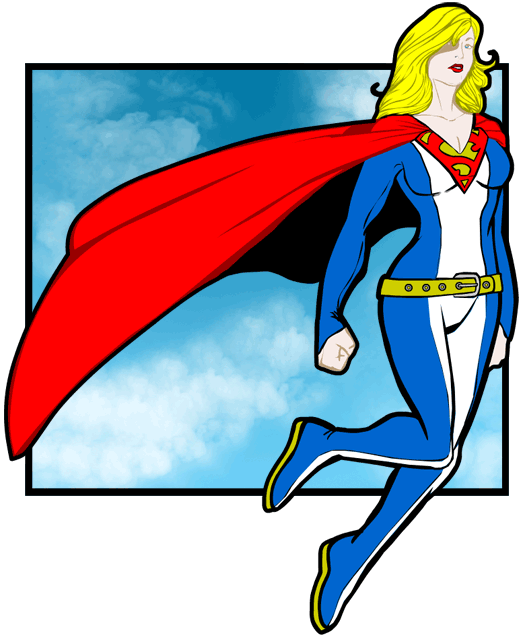 Luckily my friend John was able to point out that a big useless belt like that was positively Liefeldian, so I removed it. In its place I tried various pseudo-belt treatments, but ultimately decided that if she's going to be female, she should be able to do away with the straight lines and geometries of Superman, so I added the curving lines over the hips instead.

Anyway, hope you enjoyed the attempt at a redesign and reimagining of the character. I don't think this approach would be good for Supergirl, but I do like it for Superwoman, and hope you do too.

This entry was posted in Digital Illustration Lessons, Sketch of the Day, Super-Hero Stuff. Bookmark the permalink.