I've just added the complete "TopsMaleCoats" to the HeroMachine 3 Alpha. I've broken each item down into four parts -- the complete item, just the chest portion, just the upper sleeve, and just the lower sleeve, as you can see in the samples below: 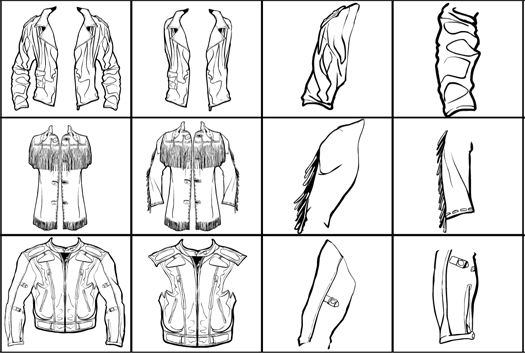 You can use the "multiples" setting and the "Flip" button to get matching sleeves on the other side. Some of the HM2.x items aren't here yet, as they were just vests, and I'll have a separate "TopsVests" set at some point.

At the end, I added in four elbow pieces that hopefully are generic enough to serve as "bridges" between sleeve portions for when you want to have a character with bent arms. Similarly, in the middle portion I added a few separated trenchcoat bits (one pulled back at the waist as if tucked behind a gun, one long vest portion just on the right, etc.) sine those seem like popular choices and mix well with the existing trenchcoat sleeves.

Let me know any bugs you find, missing items you hoped for but don't see, or anything else you want to say about the new bunch of stuff. Also, what would you like me to work on next? Popular suggestions in the past have been more hand-held items (probably either guns or Blunts), more Tops (vests, probably), more Legwear sets, etc.