The Joel Schumacher Rule allows for no exceptions, and simply stated it commands that "Thou shalt have no nipples on the outside of thy costume", but apparently Rob Liefeld didn't get the memo when it came time to put together Stryfe's "look":

My theory is that when this guy got his nose smashed in, it forced his nipples to pop out of his armor. Or, it's really really cold. Or, he's into that kind of "play" and couldn't resist leaving little booby-portholes in his otherwise impregnable defense. Or Rob Liefeld couldn't design his way out of a paper bag.

My theory, and darkest nightmare, is some combination of the last two.

I suppose, however, that if your evil armorer was so lazy he just poked some eye holes in the nearest battle-axe for your "helmet", forgetting pesky details like a space for your nose or ears, you've got bigger problems than an inappropriate level of sexual discretion.

If so, you'd have company in Shatterstar, whose outfitter pawned off an old wrestling head protector as "state of the art meta-human cranial protection": 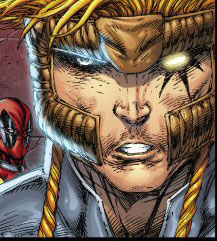 He paid a bundle for it, too, which explains why he had to slum it with Cable's eye-makeup guy. "Glowing is so IN right now!" he gushed.

But let's be honest, it's not like Rob Liefeld has all that many arrows in his costume design quiver; had he put together HeroMachine, there would only be twelve items in it, and eight of them would be thigh pouches.

(All images and characters ©Rob Liefeld and Marvel Comics.)

This entry was posted in Bad Super Costumes, I Hate Rob Liefeld's Art. Bookmark the permalink.