You rarely find a super-character who can inspire gales of hysterical laughter at both their costume and their name, but Dr. Bong has certainly managed it: 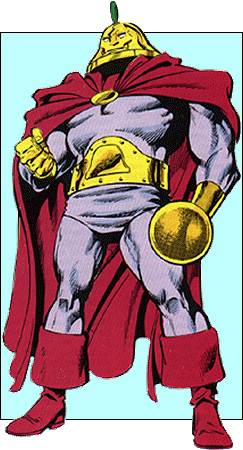 I must begin with the "helmet", which consists of a handbell complete with handle. For grasping. And ringing. You know, why not just tattoo "Grab my head and fling me about!" on your forehead? Because then you wouldn't be giving your enemy a convenient handle with which to do so, that's why, and from the looks of him, this guy is nothing if not detail-oriented. For instance, note the clever way he's embossed not just eyes and a mouth, but a nose on his bell-helment. Oh sure, he forgot to include eye HOLES to see out of, but at least he's avoided the grim specter of mockery at his lack of a full complement of facial features.

The cape is also a nice touch, because when you're staggering around after getting your head shaken like a prop in a bad Christmas Bells show and you can't see where you're going due to your lack of eye holes, it's a great idea to be enveloped in a thick, swirling, guaranteed-to-trip-you cloak. That way you're sure to fall, whereupon your ridiculously over-sized belt can actually jam itself into and through your diaphragm, saving you the embarrassment of living with everyone knowing what a bad fashion designer you are.

But the coup de grace of this ensemble is, beyond a shadow of doubt, his left hand. One possibility is that he's got a giant bell clapper for a glove, which is disturbing because it's built to slap a bell and the closest bell invariably is going to be his freaking head! I don't know, maybe he's into slapping himself around in a fight or something, and while I don't want to harsh on anyone's ability to get their jollies, couldn't he do that in the privacy of his own home? Or dungeon?

The second possibility is that the bell-themed accouterments are a distraction, and his name is actually code for an illegal bit of drug paraphernalia. I sure hope that's the case, because it would really do my heart good to see a super-hero pausing in the middle of a battle to toke up. "Fight's over, super-dudes, it's brownies-time at Doctor Bong's HQ!" If he were patrolling the city you can bet there'd be a huge spike in crime every day at 4:20.

I'd salute you, Doctor Bong, but I won't out of fear you might salute back and knock yourself silly. Well, sillier, anyway.