This is the way the world ends, not with a bang but a Denton.

In our last episode, our post-Apocalyptic road warrior took shelter behind his massive V-8 (the car, not the drink, because that would not be very effective, now would it?) and was deciding whether to leap behind the wheel or dash into the store to join Long Jake and his damsel in distress. I don't know yet whether Long Jake is in a dress, though that would be a nice bit of symmetry.

Focus, people! We chose to run for our friends in the store, resulting in: 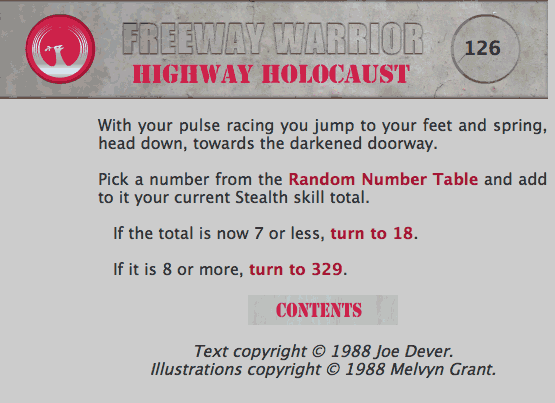 I actually use a printed-out and cut-to-size Random Number Chart from the rule book for this. I'm kickin' it old school. Thus I closed my eyes, twirled the chart, plunged my pen down and got ... an 8! A bona-fide non-sucky result. Added to our massive Stealth score of 2, that gives us a total of 10. Apparently we were able to hold the jingle bells on our harness silent for a few critical seconds. Meaning: 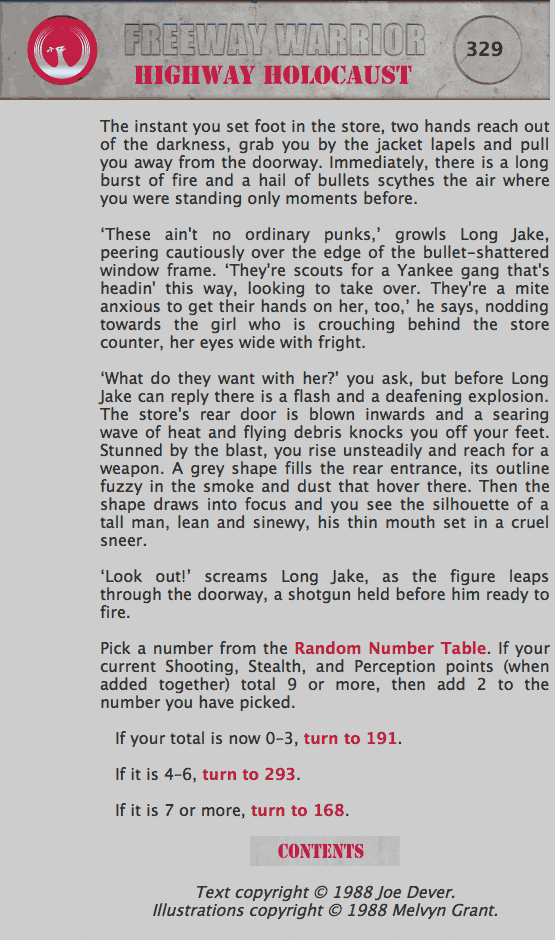 Geez, they want me to add three numbers together, then roll and add a fourth one to that?! What am I, Pythagoras? We're on vacation here in the U.S., folks, and no one told me I'd need a graphing calculator! Luckily for you all, I am feeling both magnanimous and numerate, so I calculated that in fact our combined roll exceeded 9, thus giving us a +2 to our roll. Which turned out to be a 10, so we didn't need the extra boost, nyah! Maybe I ought to go buy some lottery tickets .... 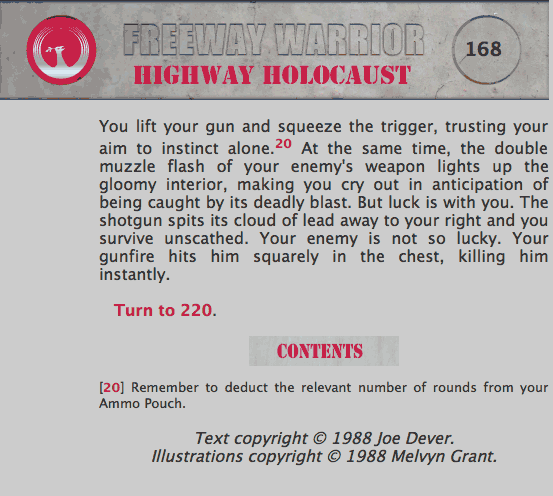 SUCK ON THAT, GIBSON! Ahem. You have to admit, so far we've been pretty bad-ass for a guy with a pencil neck and a weak heart.

And now, we bring you many many paragraphs of text. First we had to do math, and now we have to read. Speed it up, Shakespeare, and get us to a place where can we shoot something again! For those of you with far more important things to do (hello Google Image search for cosplay bunnies!), I'll summarize at the end. 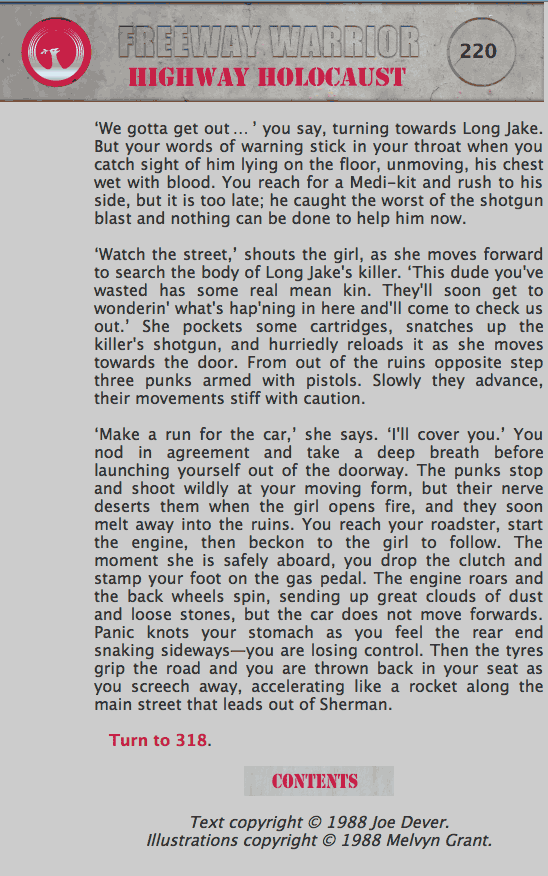 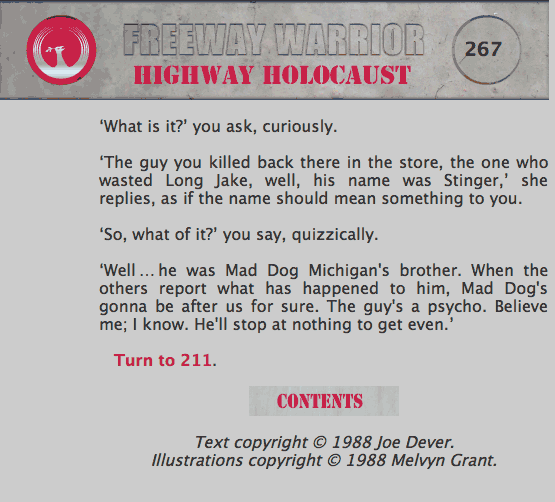 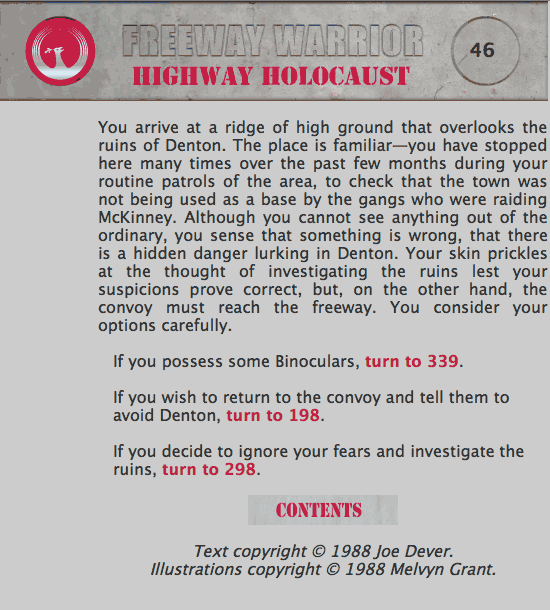 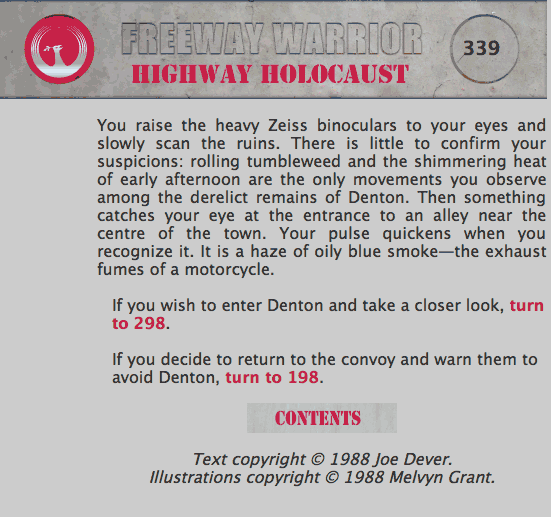 So the woman Long Jake died to rescue turns out to have been the girlfriend of the most powerful bandit in the region, whose brother we shot in the face in a most bad-ass way, meaning the aforementioned brother and lover will pursue us to the very gates of hell, where Ricardo Montalban in a chestless shirt will spit at thee. Or something. So we packed up our family and moved to Beverly, after setting fire to our former hillbilly camp.

Now we're looking at Denton -- because when I think "high adventure", Denton, Texas is top of the list, believe me -- and deciding if we ought to mosey on in even though it appears occupied (presumably by bad guys), or pass it by.

So for this Thanksgiving, I am thankful we have a) high-powered binoculars and b) the eye of a sharpshooter! Now, decide what we do next:

On the one hand, we might be able to gear up and/or find some other cool adventure stuff there. I mean, they do have a Wal-Mart, after all. On the other hand, if there are bad guys there, the odds are pretty good we will get shot. YOU ... MAKE ... THE CALL!

20 Responses to This is the way the world ends, not with a bang but a Denton.