As you'd expect, the 1940s saw a multitude of patriotic-themed super heroes hitting the comics newsstands even as real war raged across the globe. Few realize that in the same venue, another deadly conflict burned out of control -- a war on fashion, led by Yankee Doodle Jones: 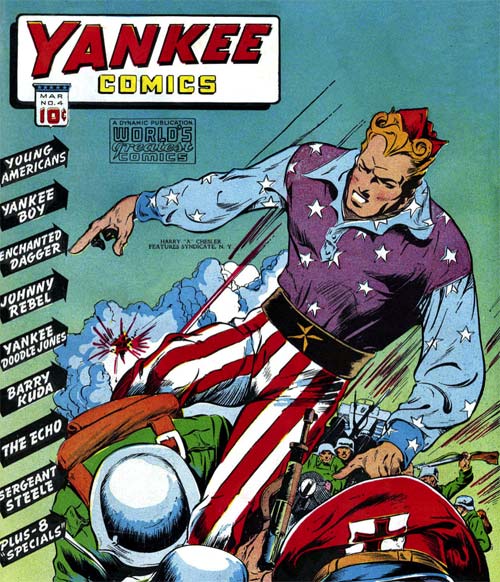 As jarring as it is to see purple and aqua on an outfit that's ostensibly based on the flag of the USA (which, need I remind you, contains neither purple nor aqua, nor wrestling), even worse to my bleeding eyes is the jaunty red flight-attendant cap he's sporting. I can just imagine him leaping into this heated battle with the heinous Nazis screaming "Coffee, tea, or ME!"

The bad costume is what brought us here today, but I can't close without saying a word or two about the name. "Yankee Doodle Jones"? Really? There's nothing like an implied "Dandy" to make your enemies tremble in fear. Or possibly titillation, depending on their proclivities. But perhaps this was just the forerunner of a whole clan of Yankee Doodles, like Yankee Doodle Sam and Yankee Doodle Fred and of course, cousin Yankee Doodle Betty.

"Darling, the Yankee Doodles are coming over for dinner tonight, so be sure to break out the good star-spangled purple and aqua table cloth, won't you?"