Admittedly, "Night Fist" appeared in the pages of "Hitman", which means he's more of a joke than anything intended to be "serious", but I can't let the Greatest Bad Costume Element Since the Sword Gun pass without comment: 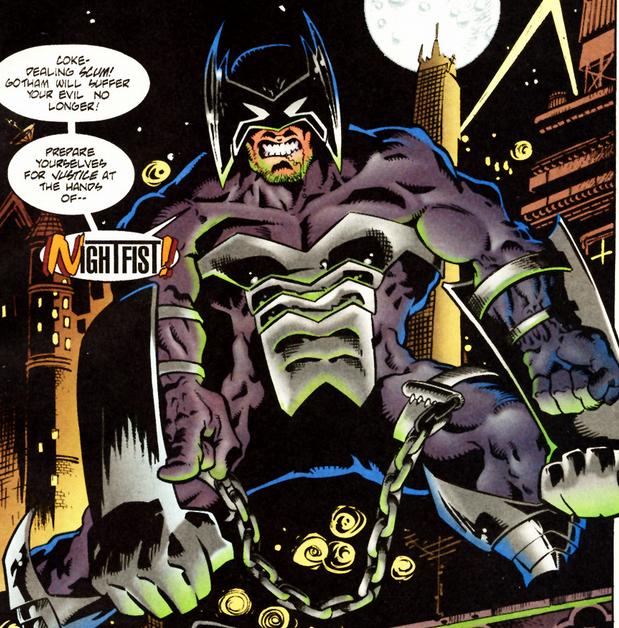 Those are giant wrist-guard punch-knife-style metal gloves with fists on the ends! They're fists you wear on your fists, like boxing gloves only even less functional. By my count, that's at least four kinds of awesome.

Throw in the faux Batman style metallic helmet and the chastity-belt leg chains (?!) and we've got a serious contender for one of the all-time worst costumes in comics history.

Setting that aside, how bad is the actual illustration? It looks like some of the more egregiously rank drawings in "Captain Canuck" from back in the day. His legs are a disaster, the torso looks like it had a bad run-in with an Imperial trash compactor, and I can't for the life of me figure out how he's pointing outside that metal fist glove.

Luckily he got shot to death by a bunch of criminals before the issue concluded, so at least the costume can lie in peace. Or pieces, which is even better.

(Image and character © DC Comics. Many thanks to reader Wesley for passing along this great image.)