(Edited to Add: With thanks to the excellent commenters below, it turns out I'm an idiot -- who could have guessed?! -- and the Goliath below is actually the Clint Barton a.k.a. Hawkeye version. I am leaving the post as-is because it's funny even if it's wrong, and because the world should always have clear proof that I'm an idiot.)

Goodness knows Hank Pym's gone through his share of identity crises, veering wildly back and forth among Yellowjacket, Giant-Man, Ant-Man, and who knows how many others. So I suppose we shouldn't be surprised that he might have a "Bondage Meets Gender Confusion" conflict as well, as evidenced by his "Goliath" costume: 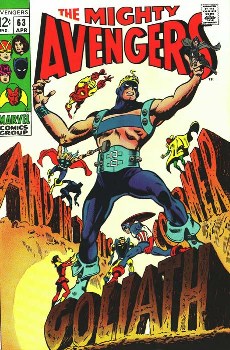 On the one hand, I have to give him props for being willing to wear a manssiere out in public like that (or for you pro-Kramer folks out there, "The Bro"). Granted, he did butch it up a bit with the big metal rivets on the shoulder straps, but you can't tell me that's not a bra.

On the other hand, I can't figure out how he's keeping that barely-covers-the-shoulders, abs-revealing blue half-shirt attached to his body. Maybe the manssiere keeps it held down, but I can't fathom how it stays skin-tight like that. I suspect daily visits to his local bondage shop are in order for some sort of body glue.

And I bet he's got their Customer Loyalty Rewards Card for the frequent purchaser, too.

I think adding a full-on leather wrestling belt, complete with straps and buckles, in that delightful shade of aqua is a further testament to Hank's level of comfort with his own conflicted sexual identity. Sadly, later he'd abandon his more feminine side in favor of a full-blown, can-we-say-overcompensating leather-clad "Check out the package, ladies!" wife-abusing Yellowjacket identity:

So to all you cross-dressing or transgendered folks out there considering a career in the super-hero arts, I urge you to follow the example of Goliath and not Yellowjacket -- own your identity, be loud and proud, and above all, never wear aqua with blue after Easter!

P.S. On a more serious note, how awesome is that cover?

26 Responses to Enter .. The Manssiere!