If you go to your local "Kenny Rogers' Roaster" establishment and see a special advertised for "Roasted Chicken", you are going to assume that the meal you order will have either something roasted or something chicken, and preferably both.

The same rule of setting customer expectations should apply to comic book characters as well, but sadly the creators of "The Black Cobra" are unaware of the convention: 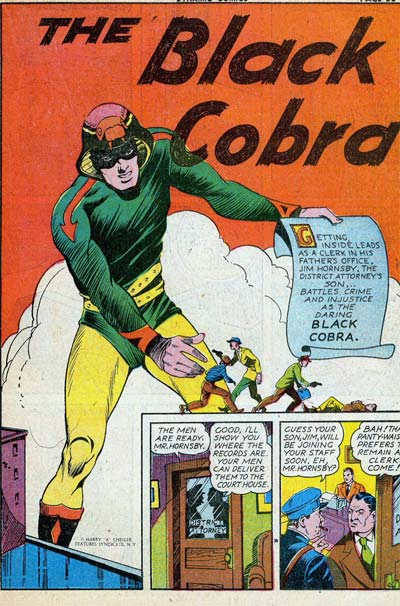 Because if you're going to have the word "Black" in your adventuring name, and you're a white guy, you damn well better have some black in your costume! A quick visual check using my handy color wheel, however, reveals that while the Black Cobra has yellow, green, orange, and purple (!), he does not sport anything black*.

Returning to our initial analogy, it's like Kenny dished you up roasted fish instead of roasted chicken.

Furthermore, an extensive HeroMachine Blog Investigation reveals that cobras do not, in fact, feature yellow**, orange, or purple in their actual bodies. I can forgive that partially, since at least he gives us some green, but if you're going to call yourself after a colored animal with a color that animal does not, in fact, possess, I am again going to have to deduct points for not actually using the introduced color in your costume.

Reducing this outfit's appeal even more is the "My animal is swallowing my head" motiff, which I've commented on before and never liked.

Plus, it appears that instead of a forked tongue featured in most reptiles, our hero has instead given his inspiration an arrowed tongue. I'm not sure what it's pointing to, but I am sure I don't want to know. He's also chosen to chop it out of the cobra's mouth and staple it to his arm instead.

Somehow, I don't see this guy being championed by the Cobra Anti-Defamation League any time soon.

Finally, in addition to him misleading us by setting false expectations via his name, he also doesn't grow in size like this splash page indicates, nor is his power holding up giant signs touting his own awesomeness. So to the publishers of Dynamic Comics, I say "BAH!" Take your fake not-black not-growing not-color-correct, tongue-stapling character and slither away!

For the record, here's how you rock a Cobra-themed outfit: And that's why Cobra Commander is back, while Black Cobra never really arrived in the first place.

* Except maybe the face mask, but that's probably just shadowed green.
** Some have a sort of yellowish color on their undersides, but I consider it more like a beige.

10 Responses to On setting costume expectations