Getting your face eaten

Apparently being consumed by your costume causes your toes to melt. If you're a Marvel super-villain, that is. Exhibit A is Man-Ape: 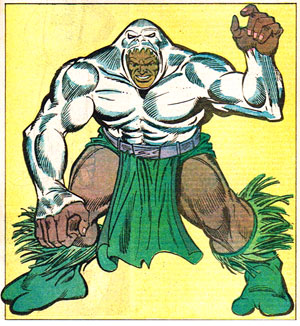 Notice how his head is placed inside the jaws of the great white ape that is apparently eating him. I assume that's why he's down to just two toes on each foot, both of which are much larger for some reason than they would ordinarily be.

But white gorillas aren't the only species that causes foot distortion during mastication, my friends. This is also true of killer whales, as our friend Orka shows:

Orcine digestive juices differ from primates', however, as you can see by the fact that Orka's toes have been completely flattened instead of merged into two separate giants.

Now look, I can dig on Man-Ape's crazy jungle-vine boots because, hey, apes live in the jungle and you want to go with a motif. I feel ya. I don't understand why he's being eaten, but hey, I'm a live-and-let-live kind of guy, and if that's what scratches his crazy hybrid itch, then I say go for it, brother. Half-brother. Whichever.

But Orka confuses me. Why is the killer whale caught mid-snack in the middle of eating Orka blue and white instead of black and white, as in nature? Maybe the giant whale-teeth jammed into his face somehow distorted his color-sense, I don't know, but it's a weird choice.

Seriously, doing human-animal hybrid characters is tough, I get that. And I imagine representing this in costume as one-is-eating-the-other has a better shot at passing the censors than one-is-breeding-with-the-other, but still -- fangs in the face? That's both bad costume design and bad table manners at the same time.

Orka and Man-Ape are © Marvel Comics; images are from "The Official Handbook of the Marvel Universe", Volume 2, Number 9, 1985.

5 Responses to Getting your face eaten