Stand witness, friends, as I commit a major act of sacrilege by declaring that one of the Holy Trinity in the DC Universe has a bad costume: 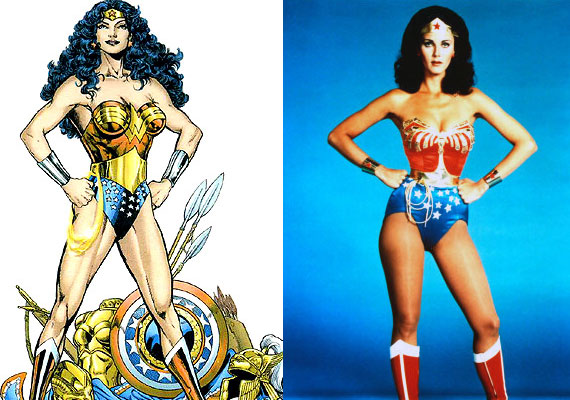 On one level, obviously, this is a perfectly fine costume, as it has helped elevate Wonder Woman to the upper echelon of recognizable and bankable heroes. It's not ridiculous like Calendar Man or hideous like Lightstar or in an obnoxious color like Paladin. It's in primary colors, it shows a lot of skin, and it has a consistent identity, so it satisfies the bare minimum standards for a competent outfit.

But what jumps out at you when you look at Wonder Woman (and don't go with the reflex schoolboy answer)? For me, it's this overwhelming sense of the United States. Red, white, and blue, white stars on a blue field, hints of an eagle in the chest piece (depending on the era). It screams "American Flag".

What's missing is any sense of this person as an Amazon, as a warrior from another culture, as someone who is, fundamentally, not American. I get that she was developed during a time when being pro-Americas was a prerequisite for any character, and that her buddy Superman pretty much cornered the market on that angle. But Superman's costume isn't so blatantly American as Wonder Woman's, which frankly would not look out of place on a female Captain America.

Its badness, therefore, is of a higher order. I would argue that it fails because it says nothing whatsoever about the person wearing it. Furthermore, I think this is a great example of a failure arising not so much from the costume designer as of the character herself. Wonder Woman doesn't have any real reason for existing on her own as anything but a female Superman analogue. And yet grafted onto that is this patriotic shell that makes no sense from the character's perspective.

Setting aside the "meta" aspect of character influencing costume, though, the specifics of her outfit are also strange. The top is usually drawn as metallic, yet (as usual with fantasy females), such armor would be useless in an actual battle, leaving most of her body completely exposed. And if she's invulnerable, as the modern incarnation seems to be, what's the use of metal armor in the first place?

Star spangled underwear always struck me as a bit absurd. Which, given the fact that they're wearing their underwear on the outside in the first place, is quite the trick. You can see in the live-action version just how ridiculous it plays out in real life, however -- it just looks like she rolled out of bed in a seventh grade slumber party.

The basic concept of the bustier is fine, and I actually like the way it translates in the live version, but in the comics I always wonder just how that works. They draw it (as here) sucked onto her breasts like wet plaster, but no metal would work like that. Or if it did, there's no way she'd be able to shove those things in there.

I just think the design misses the mark badly, forced to borrow a patriotic identity out of fear of giving the character herself any real heft or weight. I'd love to see her in something that brought out her Greek origins, or reflected more of a warrior princess motif, or really anything that wasn't warmed over Captain America.

I look forward to your evisceration of my feeble thought process in the comments!

24 Responses to I wonder