Hitting him would be a mercy

My latest theory is that Wonder Man's costume is so bad, it infects the costumes of all the people around him too. We saw it with the West Coast Avengers, and we see it again in this dubiously-named villain called "Hit Maker": 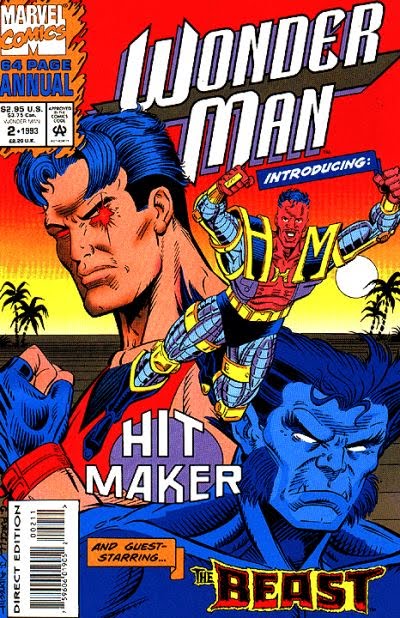 This guy looks like Sinestro and Colossus somehow got busy and had a bizarre hip-hop bastard child with poor fashion sense. And believe me, this is one DC-Marvel crossover that should have died aborning in the editorial offices, because it's one of the worst outfits I've ever seen. From the big gold bling ring bar on his right hand to the inexplicable armor that only covers the arms and legs (corporate motto: "Why cover the vitals when you can save a limb!"), it's all just wrong wrong wrong.

And then there are the reverse-C clamp things on his thighs. I am trying really hard to imagine a more useless accoutrement, but am coming up blank. What's the point of armor that only covers a four inch high strip on the back of your thighs, leaving the front open? I mean sure, if it were festooned with pouches or something I could see it, but as is, it's just bizarre.

The worst part of the whole thing, though, is the giant metal yellow "H" and "M" shoulder pads. Seriously, what the heck were they thinking with this? Did he see Wonder Man's giant W and M costume and think "I have GOT to have that"? Does he have some sort of memory problem and constantly forgets his name, needing the mnemonic trick of his initials constantly on his body to remind him?

I bet Beast is glowering like that because the artist in charge wanted to continue the "Initials On Their Bodies" motif by shaving a ginormous "B" in his chest fur. Sadly, even that would be a better look than this orange-skinned no-long-term-memory MC Hammer wannabe sports. "Hit Maker" and his costume are definitely one hit that should never have been made.

23 Responses to Hitting him would be a mercy