I won't go so far as Randy Neuman did and claim that "short people got no reason to live", but I am willing to say that people who wear purple shorts with purple shirts and purple pointy-topped boots got no reason to be super-heroes: 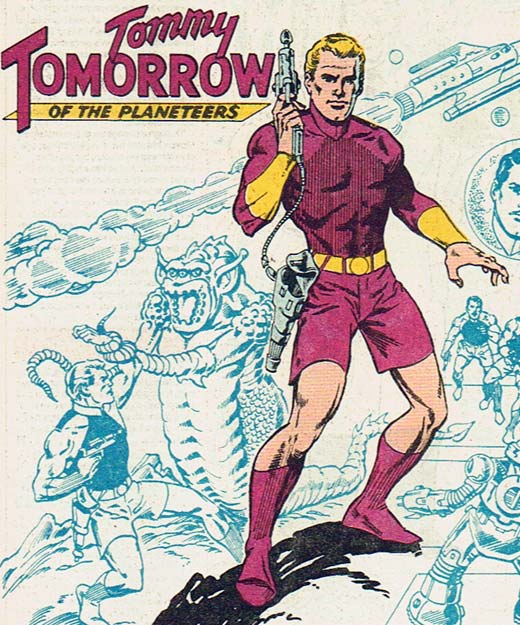 Look, if you're wearing an outfit that would fit right in at a McDonaldland Playscape Junior Play Date and you're over the age of ten, you probably shouldn't even be outside, much less adventuring. My hope here is that somehow Mr. Tomorrow badly misread the corporate "Casual Friday" policy and, since he's packing heat, everyone was too scared to say anything.

I could almost live with this ridiculous get-up if it weren't for the pointy-topped skin-tight boots. If he were gadding about space in, say, some fashionable yellow or purple flip-flops, we'd be getting somewhere, like he's "Tommy Tomorrow the Space Cabana Boy" or something. I'd even be willing to spot him a pair of low-slung pointy-toed floppy Robin booties, but those things he's got on now have got to go.

And why, in the name of all that's sartorial, would you wear a long-sleeved shirt with your shorts? Do they not have thermostats in the future?

I do, though, feel happy that in the World of Tomorrow they at least they recognize that anyone willing to go out dressed like that isn't to be trusted to hold on to their gun, and so is forced to wear a tether.

At least someone up-time has some sense.

12 Responses to Sometimes short is bad