We have insignia! One hundred of them, to be exact, by far the largest number of items in any set in HeroMachine history. And to think just a few days ago I was wondering what in the world I'd put in the Insignia slot that I hadn't already done! Many, many thanks to the fantastic response in that last thread, you all had some great ideas that really helped flesh out the set. I couldn't get every suggestion in, but an awful lot of them are there. Everything from the Tech set is also present, as is almost all of the 2.x stuff. Take a look and let me know what you think.

Here are a couple of previews to give you a taste of what's now available: 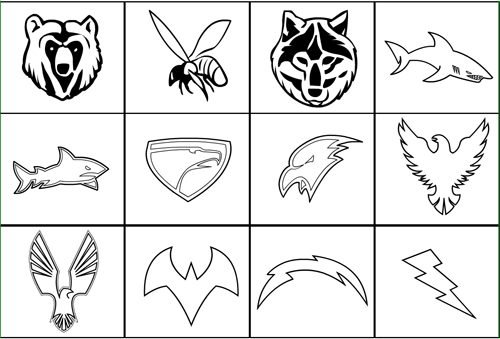 (Some of your old favorites, plus variations on them -- like multiple lightning bolts and birds -- and some totally new stuff to boot.) 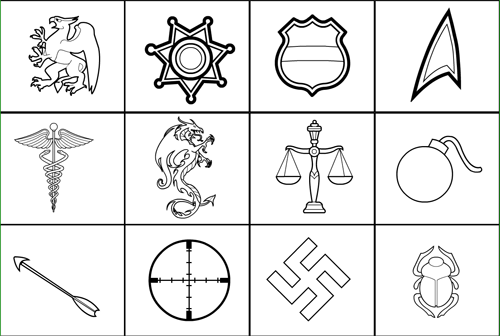 (Lots of suggestions from the comments are in the new set as well, including the crosshairs, the swastika, the bomb, the scales, the caduceus, and many more.)

I'm probably going to take a bit of a breather for the rest of the day, gather feedback, and then put out at least one more sub-set of Insignia if not more. I really liked Hakoon's idea of labeling the runes Kalkin suggested in the actual preview box with the name of the rune. That's pretty cool. So I'll be knocking those out, and then probably doing at least one set of letters. If anyone has a super-cool font you want to point me at as a guide, I'll take a look.

I want to also point out how flexible these insignia items are with all of your transformation tools and the use of multiples. For instance, the last two items are a Union Jack and the US Stars and Bars. The careful observer will note that each of those flags has three colors -- red, white, and blue -- and yet HeroMachine only allows for two colors. If you want to have an authentic-looking flag, therefore, you're going to have to use multiples.

First, choose the square insignia, and make all three colors white. Scale it into a rectangle, longer than it is tall, like a flag. Make sure the "Multiples" selection is on and pick one of the flags, and make the first color red (or blue, I can't remember which is which), and vice versa for the other color. Size it so it fits onto your white square, allowing the white bits to show through the stripes and stars I left transparent, and you've got yourself a flag.

As just one more example, in HM2.5 I had an Insignia that consisted of an archer on top of a circle. You'll notice that in this new 3.0 set the shooter is alone, with no circle. That's because you can choose the circle Insignia, set multiples to on, then choose the archer and layer him on top. This allows you to recreate the same logo with up to four different colors, while still giving you the flexibility to have a square shape behind him instead, or a triangle, or whatever you like.

Finally, whenever I get to the ItemRight/Left-Shield set, you'll be able to use any of these Insignia as the boss on a shield. Or to decorate a tabard, or a piece of chest armor. The possibilities are endless.

I hope you like the new options and artwork, let me know if there's something missing (besides what I mentioned above -- runes and letters) that you just have to have and I'll see what I can do. Oh, I also want to do a "Flags" set to include the Confederate stars and bars, that was a good idea that I just couldn't fit in. The file started acting really funny at 97 items, I couldn't actually click on them any more and had to finagle my way around, so this is pretty much the cap on the total number of items I can have.