I've just released the ItemRight-Blades to the HeroMachine 3 Alpha. Note that this is part one of two sets of Bladed items; once I got to 72 entries, the file was getting to be too slow to work with easily. So starting tomorrow I'll be working on "Blades2", as I am only halfway through the HM2.x cutting implements and haven't gotten much into the user-submitted stuff. Breaking everything into four pieces is slow slogging and really balloons the file size.

To recap, you'll see each item broken out into four pieces: the entire sword/dagger/whatever; just the hilt and pommel; just the crosspiece (what the heck is that called?!); and the blade. Basically this gives you a mini-HeroMachine "Weapon Maker" within the main application, because you can add the handle of a broadsword to a round katana crossguard and a greatsword blade. Or -- and this is pretty neat -- you can put a ... ahem, an "energy based saber-like blade" onto a samurai sword base.

I know, cool, hunh?! Here's one screen of previews showing some of the new entries: 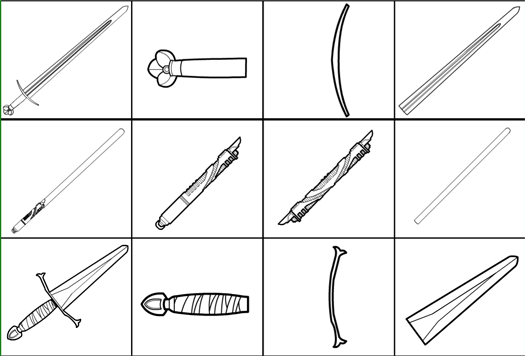 In some cases there wasn't really enough of a crossguard to warrant having it as a separate piece, but I wanted to keep to the "four items per design" thing going, so I threw in something else that fit. For instance with the colonial hatchet, I made a double-headed blade instead, and for the sickle I put in a spiked hand guard.

Let me know your thoughts on what I have so far, any changes you'd like to see made, any bladed items NOT currently in HM2.x that you want to make a pitch to include (Scorp, I still have all your suggestions on file), etc. I hope this works like I think it will and that you find it fun to play with ...