He's back to bother you

The future, my friends, is more horrifying than you can imagine, because not only has Disco survived, it's thrived and has its own super-hero champion: 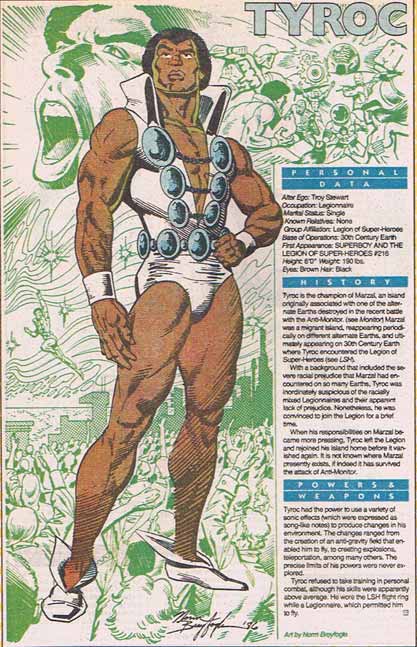 At first I was afraid, I was petrified. I kept thinking I could never live without him by my side. But you know, he's black, from outer space, I opened up my "Who's Who" and saw that stupid look upon his face. Then I kept looking and saw that apparently I was wrong last week and the Legion of Super-Heroes is at least a pants-free club. Maybe the requirement is that you also have to wear chains of some sort on your chest, I don't know, but Tyroc is nonetheless really working this outfit, girl!

It takes a pretty confident guy to wear a white leather sleeveless vest slit to the navel with a popped ear-high giant collar. Combine that with incredibly snug leather whitie-tighties and Peter Pan slippers, not to mention sweatbands and a pose that can only be described as sassy and you've got yourself a dulcet-toned crooner whose voice can not only teleport himself, stop energy blasts, and propel himself through the air, but also make you get down with your funky self!

As for the gigantic metal discs joined by chains across that rock-hard chest, what can I say? It's like Thor ran smack dab into the Dazzler and produced this cocky young love child from the future. One thing you can say for sure about Tyroc, though -- with an outfit like that, he will survive. Heyay hey.

15 Responses to He's back to bother you