Posted on August 6, 2008 by AFDStudios | Comments Off on Contest 21 Prize: Captain Thorn

Socrates and I have finalized his prize for winning Caption Contest 21. Here's the great description Socrates sent me:

As for my prize, I'd like for you to do a picture of my longtime roleplaying character Captain Thorn. He's sort of a World War One/Victorian era British adventurer, refined yet savage at the same time. I made a picture of him using heromachine which is fairly accurate which can be found at http://freewebs.com/captainthorn/captainthorn.jpg (the pants aren't really right though)... his hair is steel gray but whitening at the temples due to age, cropped short, his skin dark and sunbronzed and weathered with age, never without a five o'clock shadow and a cigar in his mouth. His clothing is basically safari gear, adventure type garb with a cowboy-style gunbelt and holster. He's roughly forty-five or so http://tristram.wikispaces.com/space/showimage/facemaker.jpg is a pretty good depiction of what he looks like. always has a sort of shiteating grin on his face.. sort of a cross between Indy, Doc Savage, and James Bond with a little Crocodile Dundee thrown in there. A shot of him firing a Webley pistol would be just great

I actually ended up doing two different versions of the illustration because I couldn't decide which I preferred. I did this one first, which I liked: 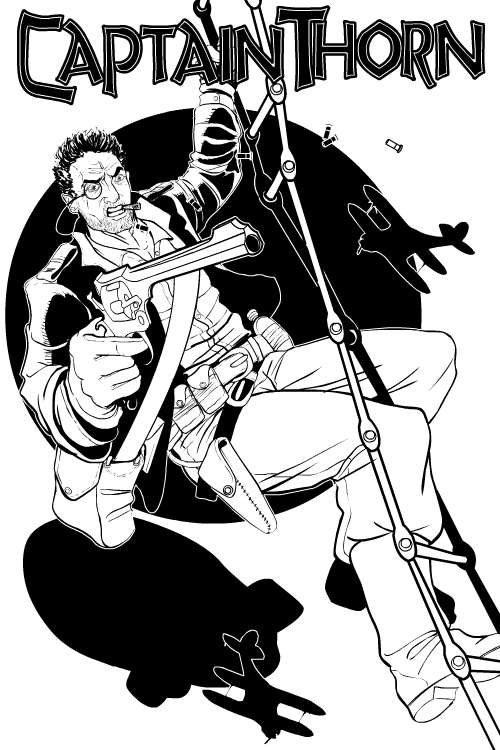 But then I decided that I really wanted him to be fighting a big cybernetic gorilla. So that's what I did: 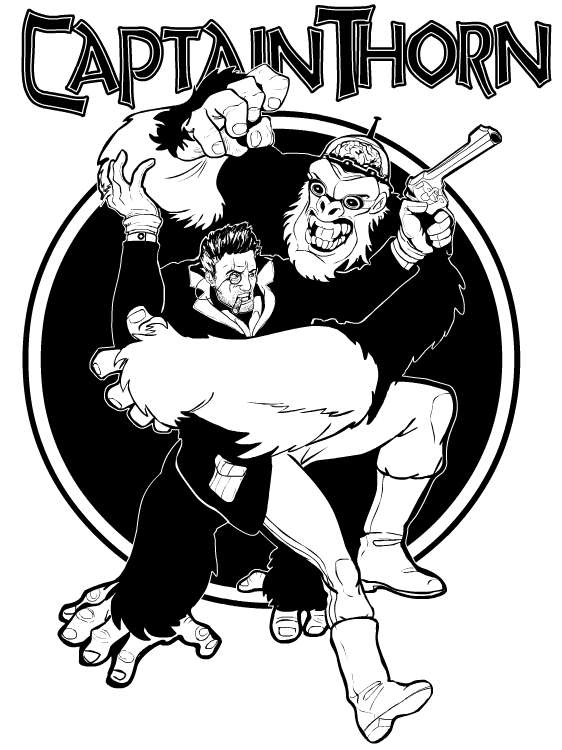 Remember kids, and this is an important tip for any of you parents out there too, everything's better when there's a cyborg ape involved. You can write that down.

If you want to win your very own custom illustration of whatever you like, put on your thinking cap and head over to Caption Contest 23, going on now!