Posted on December 31, 2018 by melmo44 | Comments Off on Assassin’s Creed: Odyssey- First Thoughts 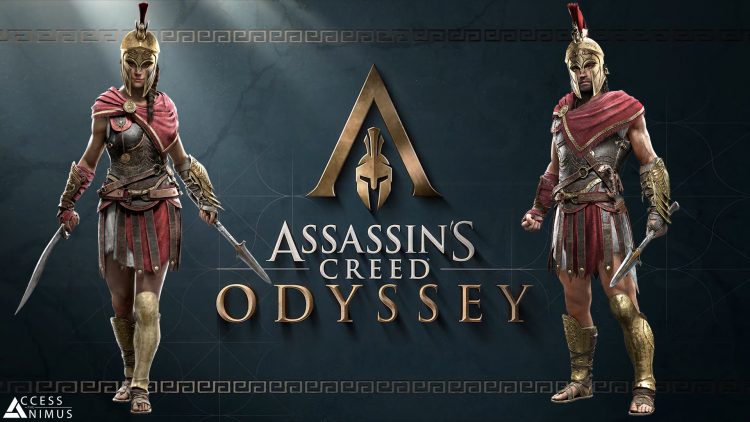 Hey everyone, time to ring in the New Year! And I’ll be doing it by telling you about Assassin’s Creed: Odyssey, or, the game that might turn me around on this whole franchise. This first-thoughts-review was supposed to go up yesterday, but I of course got hung up researching Minoan and Mycenaean frescoes and well, you know how it is. But anyway, let’s talk about the game! No spoilers either!

So I’ve said before that I couldn’t get into the Assassin’s Creed franchise because the stuff in the present sucked and it’s not what I wanted. It also happened that they were generally doing time periods that weren’t really my cup of tea (outside of the first game). They almost got me with Origins, but I’m so sick of end-Ptolemaic-into-Roman-Egypt, that I was able to resist the allure of it. Now, had that game been set a couple thousand years earlier, we would’ve had something going. But they finally did it, they got me with my favorite. They got me with Ancient Greece, and I had to have it. So, picked it up on Boxing Day Sale over Xbox live, and here’s what I think so far:

-Ancient Greece. This was the biggest selling point for me, and the thing that actually got me to buy it. This is, as the kids say, my jam. As soon as I heard the setting was the Peloponnesian War I was sold. I am literally here for the story. I don’t care if or how they introduce the whole Assassin/Templar business, I’m here to Greek it up. And the very first part you get to play… no spoilers but that alone was worth at least part of the price for me. I’m looking forward to really getting further into the story to see where I end up in it.

-Looks amazing. I’m not usually one to get hung up on graphics and it’s not going to make or break my experience unless they are hilariously bad. But man, this game is absolutely gorgeous. The environments, the characters, everything looks incredible. And the detail is amazing, too. Buildings, even some in ruins, have frescoes and paint, and everything looks lived in. It’s so rich. 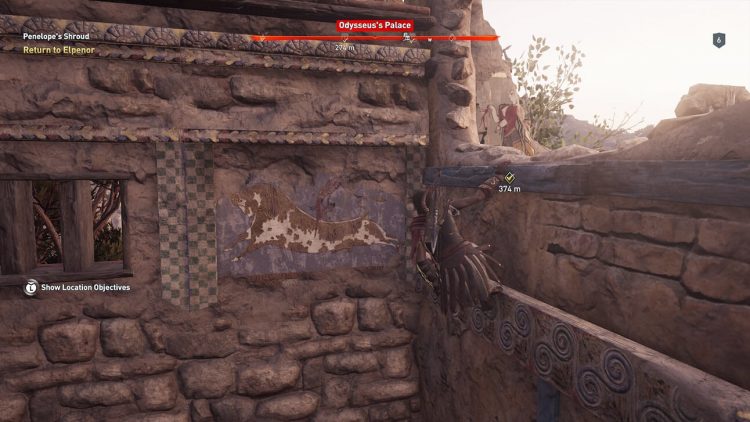 I have seen pictures of this fresco all my life. Shame the two ladies on either side of the bull are missing. And not sure what this Minoan piece is doing in a Mycenaean palace.

-Music is phenomenal. The Elder Spawn also remarked on this while we were playing. It’s very emotional, somehow. I really dig it. Also, when you’re on your ship, the rowers will sing ancient Greek songs, and if that isn’t the freaking best then I don’t know what is.

-Kassandra is awesome and has the least feminine run I’ve ever played. You get a choice with this one whether to play as the male character (Alexios) or the female (Kassandra). Naturally, I’m playing Kassandra and so far I love her. She’s actually big and muscular, she has scars, she’s gruff, and she kicks so much ass. Also, it seems that no matter the character, a female one will always have a really feminine, arms-pulled-in, hips-swaying run. Not Kass, not at all. I’ve read via Twitter she’s every bit as unsubtle in romance too, and I cannot wait for that. 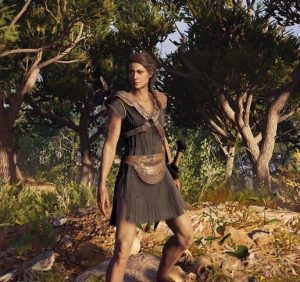 -Naval combat is really fun. So, as I mentioned, I have a ship. And when on the ship, I can engage other ships in battle with archers, spearmen, and good old rammin’ speed. I haven’t done too much with it yet, but it’s super fun so far. There’s also ship upgrades in addition to the regular armor and weapon upgrades but I again haven’t really dug into that yet.

-Present-day stuff seems really minimal so far. This is the part I don’t like, and so far, there’s been one quick scene right at the start just as if to say ‘hey, this is an AC game, gotta do the Animus thing’. That’s a-okay with me. 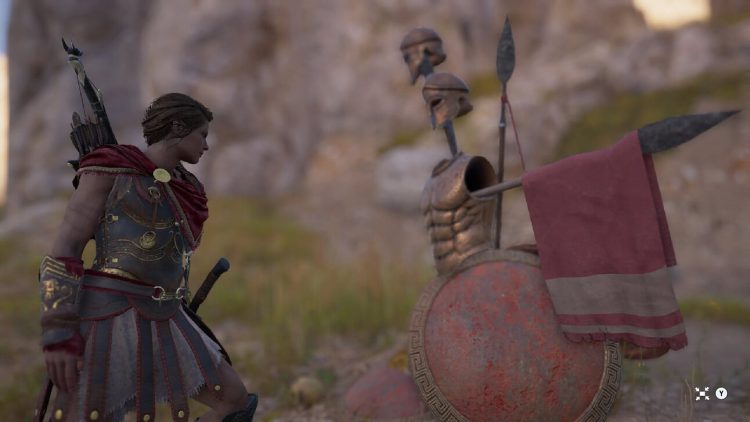 -I can climb f-ing everything. This is huge. I’m a ‘go over not around’ kind of explorer in games and it always sucks when you find that one ridge or one mountain or cliff or whatever that you can’t find a way to climb and have to go around. And you always end up going way around and nowhere near where you wanted to be. Not here. I can climb anything, and I mean anything. No cliff, no building, has so far eluded me. I even climbed the giant, naked Zeus statue, although there was a synchronization point at the top to make it worthwhile other than the fun of climbing a naked statue. It’s great. 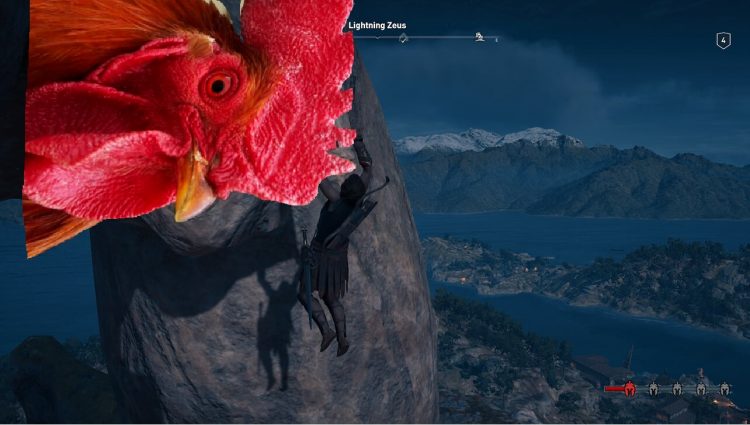 This is exactly what it looks like. Censor Rooster's here to keep it SFW.

-Combat takes some getting used to. This is perhaps on me since I haven’t really played any of the other games. It’s not particularly difficult, it’s just a timing thing with some of the parries and stuff and I feel like I’m still getting used to it. Not a con, per se, but something to be aware of if you’re new to the franchise. The counter system feels similar in a way to the Arkham games, and it’s something to get used to.

-Photo mode pics seems pixelated. Okay, this is kind of a nitpick, but I was really excited to see a Photomode. What sucks is that the pictures seem a bit pixelated as compared to the ones from the Photo mode from Fallout 76 or the regular Xbox One screenshots. Also, you access your pictures from the map, so if there’s more than one in the same location, I haven’t figured out how to access them all. Might just be something I have to play around with. 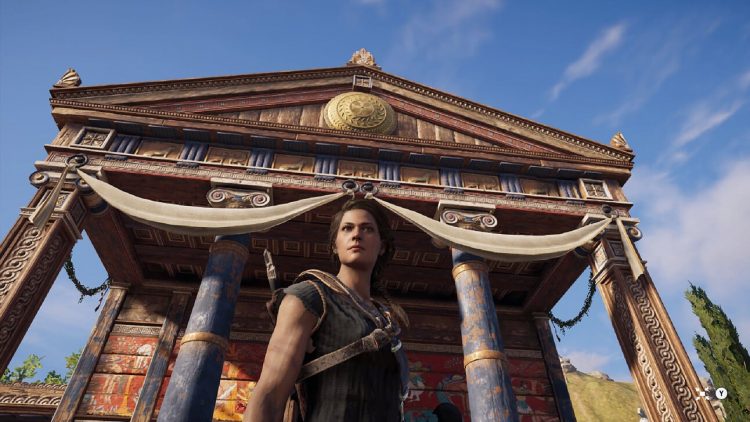 -Done romances yet. No idea how they’ll work. I haven’t gotten to a point where I can see how the romance mechanisms work. I assume there will be dialogue options, but I haven’t seen any yet. I don’t know if these will be like a Bioware game, where trying to romance more than one character leads to awkward conversations, or like in Fallout 4 where I’m romancing everyone possible with little to no repercussion. I’ll have to see how it all goes down.

So there are my first thoughts on Assassin’s Creed: Odyssey. It’s pretty fun so far and I’m really digging it. If these games can just keep being awesome historical RPG’s rather than dealing with the stuff in the present, then I might just have to keep playing them. The increased focus on RPG elements is something that makes it nice and comfy for someone like me, even without the one setting I couldn’t say no to. I’d recommend it for sure.

This entry was posted in Movies and TV and tagged 2018, assassin's creed, reviews, video games. Bookmark the permalink.