Ah, the 60's. A time of peace, love and superheroes undergoing random transformations every other week. Whether it's Wonder Woman being turned into a gorilla by alien gorillas (and not by Gorilla Grodd because that actually would have made sense in a "that makes no sense anyway" kind of way), Lois Lane using a machine to make her a black woman (yes, that happened) or everything that happened to Jimmy Olsen for a straight decade, DC comics were obssessed with turning their characters into something that wasn't a superhero. However, today on What Were They Thinking (the place where we look at all of the stupidest, most ill-advised things in comic book history), we're taking a look at Batman. Or rather, as the cover to Batman issue 147 says quite clearly; Bat-Baby. 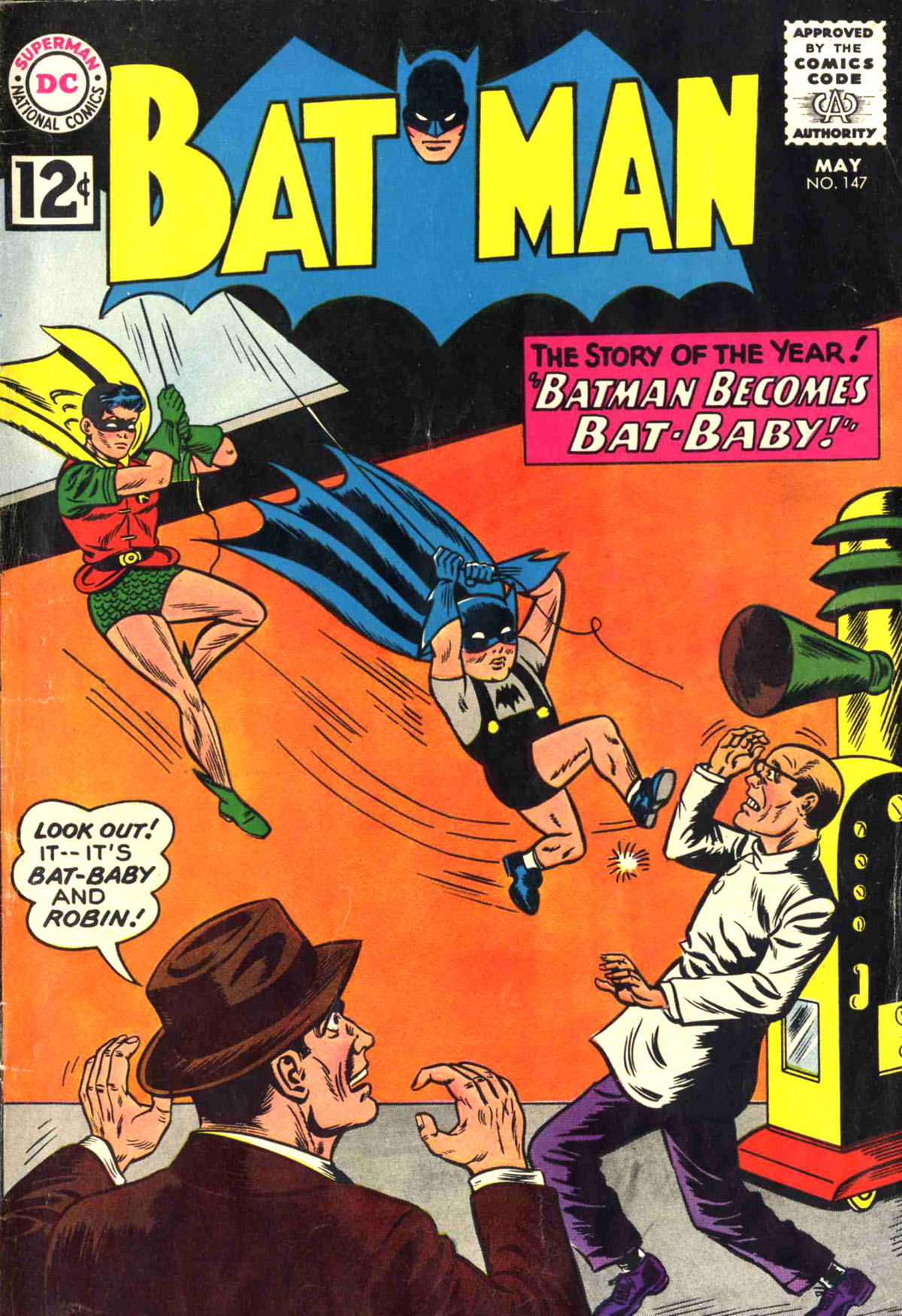 I sincerly wish that this story had happened 20 decades later so I could make a Jason Toddler joke, but oh well.

So yeah, the cover story of this particular issue of Batman was one of three stories included in the issue. The first two were quite standard comic book fare, the first seeing some Gotham crooks use alien technology to rob banks and the second being a treasure hunt. However, things go off the rails in the final story, where the Dynamic Duo confront a scientist who zaps Batman with a ray gun (which is literally how at least 80-90% of all DC stories started back in the '60's) and de-ages Bats to four years old (though he retains his mental accuity and strength). Now, normally I would question why anyone would want to make a ray gun that de-ages people to four, but that actually makes sense (being the only part of this story that does). Not the four year old part but the de-aging part, and maybe you can rationalise the whole four year old bit as it being a setting or that the ray de-ages by a certain number of years.

However, a few things I don't understand. Firstly, the evil scientist is called Garth. Lazy day at the Beaurau of Comic Book Character Names was it? You might as well have just called him Bob and been doen with it. Secondly, Batman is fighting crime in dungerees. As a four years old. It's bad enough that he's draggin a pubescent boy around with him to fight these gangsters and homocidal maniacs, but now that boy is the oldest member of this crime fighting team. And he's the one who's sensibly dressed, whilst wearing green scaley underwear and pixie boots. Also, this brings up a new question, why does Bruce Wayne have a Bat costume lying around that is the perfect size for a four year old? Do I want to know the answer to that question? Probably not.

Oh and because Batman, Bat-Baby proves to be just as adept at catching criminals as he was before he got put back in diapers, proving that either Gotham's criminals are the worst or that Batman. Probably the later TBH.

So to round of our jolly little tale, Bat-Baby and Robin re-locate Garth (Garth.... *shakes head*) and re-age Batman. And then, because creepy, Batman decides to keep his Bat-Baby costume as a trophy (and in case such a thing happens again, which it didn't, fortunately). Alfred and Jim Gordon were both fine with Batman stopping criminals as a baby by-the-by, they're just like "yeah, cool, you're only four but, you know, Batman and all that. Just make sure to punch out Guy Gardner whilst you're around. Now off you trot you adorable little FOUR YEAR OLD SUPERHERO." Did I mention that Batman got de-aged to a four years old. Four. As in 4. The age that comes upon your fourth birthday. The one after 3. That four years old. Just so we're clear. Oh and lets not forget the dungerees, because those should not be forgotten.