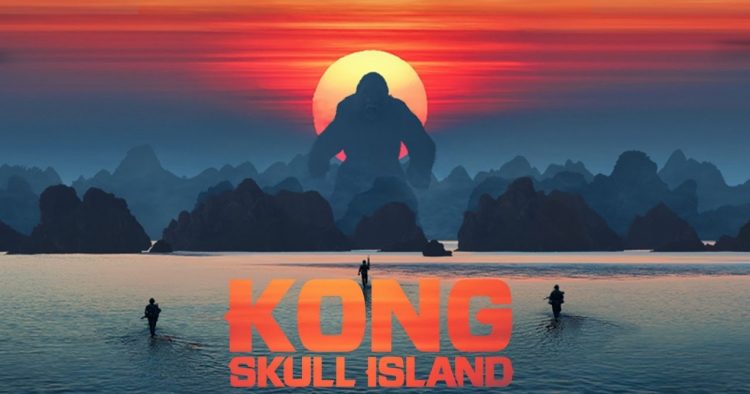 Well, everyone here we are back again with another movie review! Today we’re going to talk about Kong: Skull Island, the latest incarnation of the classic character from Legendary in the same vein as 2014’s Godzilla, and in fact paving the way for an eventual rematch between the two characters. So let’s get right to it and see how it is!

First off, what I said above is true. This version of Kong is being set up to fight Legendary’s Godzilla in a film slated for 2020, a year after the release of the second Godzilla film which is currently in pre-production. I’ve seen this dubbed as ‘The Monsterverse’, which makes sense as the second Godzilla film is also supposed to bring back more of Toho’s iconic monsters. I mention this because I’ve seen people complaining about how this is a shared universe and ‘not everything has to be like Marvel’ and whatnot. I see the point they’re trying to make, but in this case, these creatures have crossed over and ‘shared a universe’ already long before Marvel started up the MCU so I think that’s a bit of an unfair complaint. This is little different from the Universal Monsters coming back starting with The Mummy later this year. And as far as Skull Island goes, there are references to Godzilla here and there but they’re subtle. But anyway, let’s get back to the movie itself.

First off, if you’re going into this film expecting a remake of the original 1933 story just set in a new time period, you’re going to be disappointed. The story here is not the iconic Kong story but something different entirely. This time around we’re in the 1970’s; the Vietnam War is coming to a close and a squad of soldiers has one more mission before going home. This turns out to be traveling to a newly discovered island to assist the scientists going to study it. As you can guess, things go downhill from there. In a lot of ways, this really is a Vietnam movie as well as a Kong movie, and it plays with a lot of the tropes from both genres. One of my favorite tropes that they use is the soundtrack (not the score, in this case). Oftentimes, the music is actually being played in-film by the characters instead of just over what’s going on and I thought that was a neat addition. And it’s a damn good soundtrack, too, full of late 60’s-early 70’s rock. Because what’s a Vietnam-era movie without a little Creedence Clearwater Revival, am I right? There are other references and nods to the genre but I feel like I need to watch the film again to get all of them. There are also nods to not only the tie-in universe, as I said above, but also homages to the other versions of Kong as well. Arguably one of the largest are the ‘Skull Crawlers’, 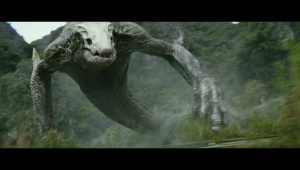 which are essentially bigger, meaner versions of the Two-Legged Lizard from the 1933 film. 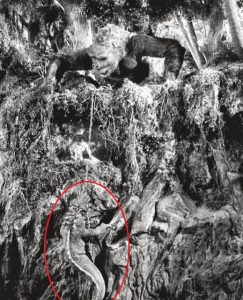 I know he's kind of hard to see even in the circle.

There is also a line that one of the characters says that is self-referential for that particular actor that got a good chuckle out of us, as well.

Let’s talk about the characters. Now in both the story and the characters I found myself making a comparison between this film and another one that I wasn’t really expecting. In a lot of ways, this movie has a lot of similarities with the first Predator. Soldiers in a hostile jungle trying to find their way out, a group that has obviously been together a long time and knows one another well. I don’t usually watch other reviews for movies before I write my own but this time I ended up watching a few of our usual reviewers, and I found I really disagreed with them. Many complaints I heard had to do with the human characters and how they were just ‘stock characters’ and not very interesting. I didn’t have this particular problem. Maybe it was because I was reminded so much of Predator? I don’t know, but I didn’t find the characters that bad. You actually spend quite a lot of time with the soldiers and you do get a sense of who they are and you feel for them. Of any of the characters I would have wanted to spend more time with, it was actually the characters played by Tom Hiddleston and Brie Larson, but it was a fairly large cast so sometimes that’s just how it goes. One character that I was concerned about going in was the one played by John C. Reilly, as the trailers made him seem really goofy and I didn’t want the film to screech to a halt when he showed up. That didn’t happen, and actually his character was incredibly interesting and actually quite affecting in parts. So anyone who was worried about that, it’s not bad, it really isn’t.

Finally, let’s talk about the big guy himself, Kong. Kong looks amazing, brought to life via motion capture and done by Industrial Light and Magic. He harkens back to the original in his more upright, not-just-a-giant-gorilla look from 1933. He is still very gorilla-like in his movements, but there is a sense that he’s something else. 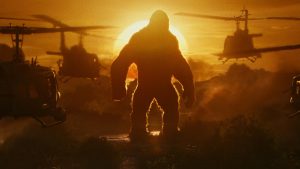 He’s also very resourceful, and his fighting style varies depending on what he’s fighting and what’s on hand. He’s got a personality, but mostly he doesn’t really want anything to do with the people, either those on the island or those that show up. As to the island he inhabits, it’s gorgeous. There were times when they were flying over that I almost expected Journey to the Island from Jurassic Park to start playing (they did film in Hawaii, after all). It’s also populated by a variety of creatures with some really inventive designs and really adds to the other-worldliness and ‘lost’ nature of it all. As far as look goes, that are also some stylistic elements that are done in some scenes that I found really interesting and gave the film a really cool look without losing the feel or the time period by being overly slick. Even the colors are a little desaturated to be less modern-looking. 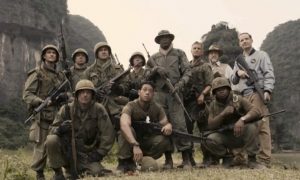 That’s about it, I guess. This one is PG-13, so if you wanted to take the kiddies, as long as they are okay with things like the Jurassic Park series or the 2014 Godzilla then they should be fine. There were a couple of moments with the Skull Crawlers where our three-year-old wanted to hold my hand but otherwise it was fine. Also, stay to the end of the credits. That’s all I’ll say.

So in conclusion, I had a really good time with Kong: Skull Island. It was a solid film and a good set-up for the character to bring him into this new universe. I’d certainly recommend it.