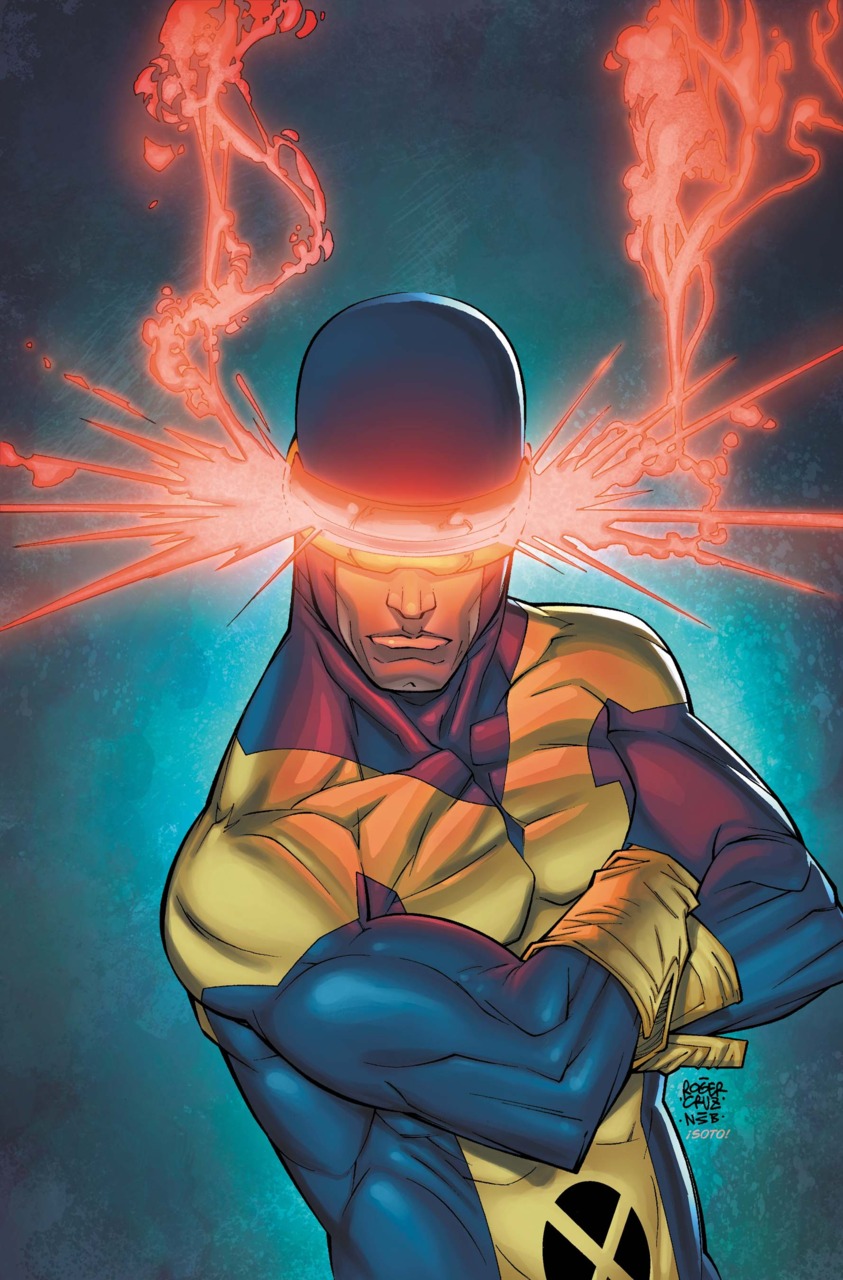 So first, a little backstory. As I'm sure everyone one knows, Scott Summers was the original X-Man. He was the first of the original 5 to be recruited by Charles Xavier back in 1963 and was the de-facto team leader throughout the 60's and 70's, being hand-picked by Xavier for the role. He was the most dedicated to Xaviers ideals of all the X-Men, even to the point that it cost him in his personal relationships, and the relationship between the two was often closer to father and son than teacher and student. He was the heart and soul of the team, the only original X-Man to carry over to the new team after the Giant Size X-Men #1 revamp other than Xavier himself. So, what happened.

Well, the first signs something was wrong came in the 80's. X-Men had been through a lot of changes since the start of the decade. Jean Grey had seemingly taken her own life after destroying an inhabited planet, Storm was now the leader of the X-Men and Scott was married to a girl named Madalyn Prior and the couple had a son, having retired from the team. However, the powers that be decided that they missed the original X-Men team and so it was retconned that Jean was still alive in a cocoon in Jamaica Bay and the Jean that destroyed the planet was a powerful alien entity posing as Jean. This would be the catalyst for the original team to come back together as the X-Factor, which is all fine and dandy right? Nope. You see Scott doesn't just re-join his original team-mates, but he actually leaves his wife and son to do so. These actions eventually lead Madalyn (who was, as it turned out, a clone of Jean all along) to become the villainous Goblin Queen, meaning Scott's selfish actions led to the creation of a powerful new enemy for the X-Men. Dick move dude, but not totally out of character, because Scott and Jean had a very long standing thing up to her "death" and the way he was affected by her "death" made it somewhat of an inevitability.

So, that's the minor stuff out of the way, the first attempt if you will. Now we come to the night of the murder, well, I say night, it's a decade and a half but that doesn't really fit the analogy, unless you were poisoning someone over a very long period of time, but I think I've got side-tracked. Anyway, fast forward to the year 2000, again the X-Men are in a very different place than they were a decade and a half prior. They'd been through the 90's, which was a bad thing, but Scott and Jean had gotten married, which was not. Anyway, the came The Twelve storyline, in which Cyclops has to merge with mutant supervillain Apocalypse to save the life of the son he had with Madalyn Prior whom he had abandoned. This does lead to a temporary bout of deadness, but he is eventually separated from Apocalypse by Jean, so good stuff. Heroic sacrifices equal hero points right? Wrong. Because this whole incident led to Scott personality being altered due to spending so much time bonded to the ancient evil grey dude. He becomes distant from Jean, which then leads to her becoming closer to Wolverine. Scott then feels like he's being ignored, despite him being the one who was pushing Jean away, so he starts having an affair with "reformed" villain Emma Frost. This proves to be a bit problematic when you're married to a telepath because she's gonna find out and boy did she. So, when Jean does find out about the whole thing, Emma really doesn't help the situation by being basically as provocative as mutantly possible and the whole thing ends up with Emma being put in her place and Scott leaving the Xavier Institute. Hero points= -5

So, what happens next? Surely they get back together and make up right? Nope, Jean dies again, thanks to Xorn (who really wasn't Magneto and Marvel would very much like you to forget that he actually was really meant to be thank you kindly), and though the pair do have a lovely "dying in your loved ones arms moment", Scott almost immediately gets back with Emma Frost (thanks to some BS involving being transported to the future and getting the blessing of a future resurrected version of Jean). Still, that pisses off literally everyone and ends up with Scott and Jean's daughter disowning her father and Scott having a fight with Wolverine outside the School. Hero points= -10

Luckily, after this incident, Scott does get some brownie points. He returns to leadership of the X-Men and is very effective, getting good press on the team by helping out with rescue and aid missions and being one of the few people to come out of Deadly Genesis and Civil War with any sort of decency. But that's mostly because everything else about those stories were terrible, so that's damning with faint praise. He also gets out of the Messiah Complex storyline looking fairly decent. And then it all comes tumbling down.

As soon as the X-Men set up shop in San Francisco the character assassination plot gets into full swing. We see the recreation of the X-Force as a black ops team whose job it is to "remove" any threats to mutant-kind in ways that the X-Men can't be seen to do and whilst Cyclops isn't hands on involved in the way Wolverine is, he's the one who created and sanctioned the team, as well as the one who choose X-23 and Wolfsbane to be on the team, despite them being rather young to be on a team with such dangerous and psychologically damaging objectives. He also uses biological weapons on the Skrull forces in San Francisco during the Skrull Invasion, unleashing a new version of the Mutant Legacy Virus on an entire city (and possibly the world) without knowing if there was a cure. Hero Points= -30

During the Dark Reign storyline, San Francisco is in the grip of anti-mutant riots, whipped up by Simon Trask. This leads to The Dark Avengers having to get involved and Norman Osbourne asking Emma to lead a Dark X-Men team to stop the riots. Whilst Emma's team succeeds in getting the riots under control, Scott is off directly confronting Osbourne, the most powerful man in America at that point and making an enemy of him. He leads every mutant in his care, including numerous teens and children against the forces of the Dark Avengers, Dark X-Men and H.A.M.M.E.R, and whilst the X-Men do escape and technically have the victory (with Emma and Namor switching back to the X-Men's side), Scott came off looking very bad in this situation, being played by an anti-mutant bigot and putting everyone in the city in danger by trying to take on the US Government, especially the last remaining mutants on Earth, whom he put directly in the front line, even if he was standing up to a known villain. Hero Points= -40

So after that debacle, Scott sets up his own Mutants only country and is so bad at running it, he alienates Beast and gets Nightcrawler killed. This eventually leads to the Schism event, where Cyclops has a kid kill the entire Hellfire Club, puts children on the frontlines against a Sentinel invasion and ends with Wolverine taking half the X-Men and leaving. Rogue even states that she is leaving because Cyclops has reached a point where he refuses to accept that he might ever be wrong. Hero Points= -50

And now, the big one. Scott, in his infinite wisdom, decides to take on the Avengers over the Phoenix Force. He becomes an avatar for the Phoenix himself, alongside Emma Frost, Namor, Colossus and Magik, and basically becomes a god on Earth. But this goes down hill rather quickly as the Phoenix Force corrupts them all, they become tyrants and Scott ends up betraying Emma to steal her portion of the force and then kills Professor X, the character who had been his mentor and father figure. And then in the aftermath he sides with Magneto and becomes a terrorist, which is where he's pretty much stayed. Hero Points= -100

So, we all know that the only people with the means and the opportunity to carry out such a malicious murder were Marvel themselves, but what was their motivation? Well, look at the date that Marvel really started going in on ruining Cyclops' reputation. Yes, they started in the 80's, but they only properly went for it after the year 2000. And what happened in the year 2000? The first X-Men movie was released, and the main star of that wasn't Cyclops, the long time leader of the team, no. It was Wolverine. Even back in the 80's, Cyclops' first fall from grace came right around the time Marvel were getting ready to publish Wolverine's first solo comic. And since the year 2000, the one character Marvel have pushed above all others (apart from maybe Iron Man) is Wolverine. You can see it in each storyline. Who is the one Jean turns to when Scott is having his affair? Wolverine. Who confronts Scott about his affair with Emma after Jeans death? Wolverine. Who calls Scott out on him putting X-23 in the X-Force? Wolverine. Who leads the way out of Utopia when Scott's actions become too extreme? Wolverine. Who becomes a member of the Avengers whilst all this is going on? Who ends up being in every X-men title there is and most Avengers titles? Who is put on the Avengers side in Avengers vs. X-Men as one of the good guys against Cyclops' bad guy? The systematic destruction of Cyclops has only been to the benefit of Wolverine and whilst I will admit Wolverine is more popular than Cyclops, was it really worth ruining a classic character just to make an already more popular character look a bit better? I don't know, what do you guys think?

Anyway, I think I've made my point. And with that

12 Responses to What Were They Thinking: In Memorium- Scott Summers