So, as last week we had one consummate Canadian as featuree, why not have another one this week. And as we had a theme of shading last week, lets go with costuming for this week, because, if you haven't twigged yet, we're talking about djuby this week, so the word costume is going to appear a lot (and I mean a lot). So buckle up, you're in for a ride. 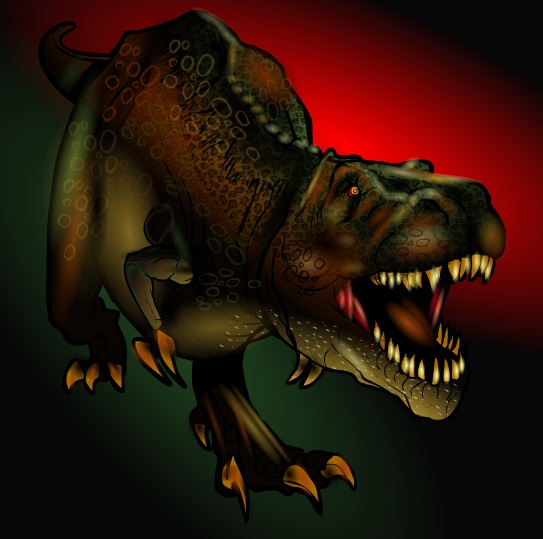 First pic in the gallery.

You can see where this is going can't you. We're looking at someone about whom it would be an understatement to say that he is very talented with the 'machine. The depth in the colour and shading here is, well, it's that. 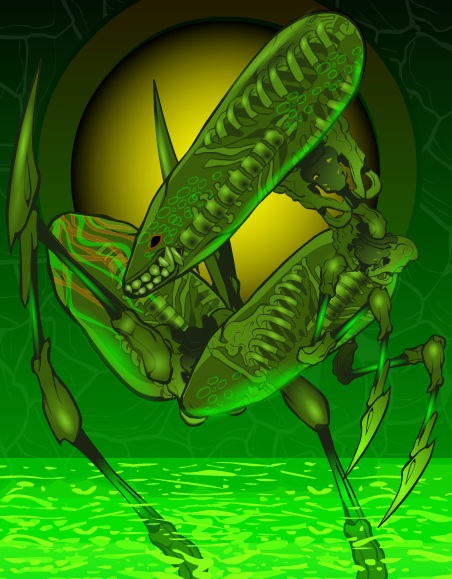 And then there's this, which is a load of heads and skeleton parts with some insect legs. You see that box that's been discarded in the corner over there? (*Points randomly in some direction not the direction of the screen*). Well that's the box djuby abandoned thinking inside of god knows when ago. Once again, depth of colour, the green glow adds a malevolent touch that just enhances how creepy the creature is, and the use of freckles makes it look like the creature is actually liquid inside. Stellar. 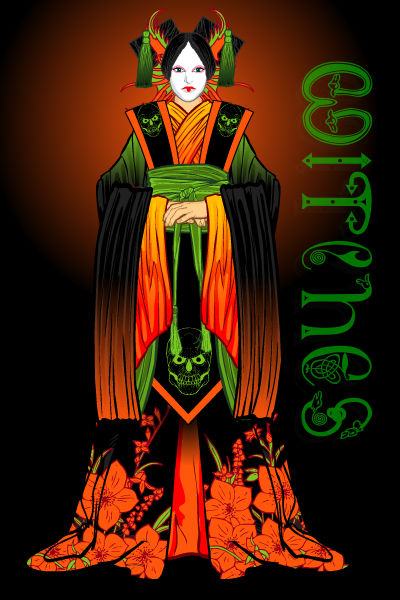 Ok, so, word of the day time. Costume. The use of belts as sleeves works really well and the colour usage just combines really spectacularly with the items. Then we have the head. The facial expression sells the piece so well, with the serious and uncaring look she is giving. And the hair/ head-dress is so fitting, dangerous and ornate, which suits the character so well, especially when combined with the expression. djuby had a series of witches from different time periods which he did. All of them are amazing but this is my favourite. The best thing about the series was the fact the colour scheme of orange, green and black was carried throughout , which gave them a very consistent style. 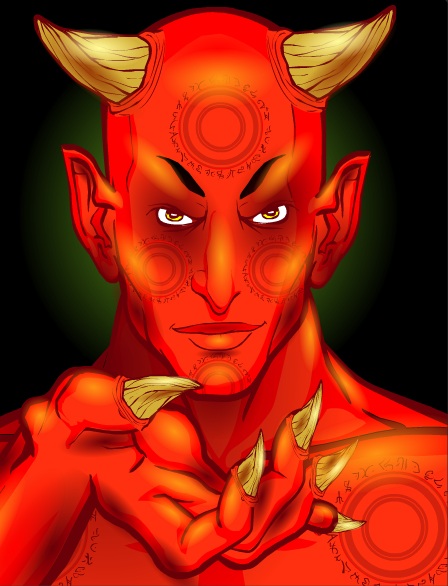 This one was from an old Pop Quiz if memory serves. The obvious thing to talk about here is of course the shading and how it sets the whole piece off. The shadow around the eyes and on the hand just work perfectly and the highlighting gives the character a very weird and unsettling unnatural glow. It just works. 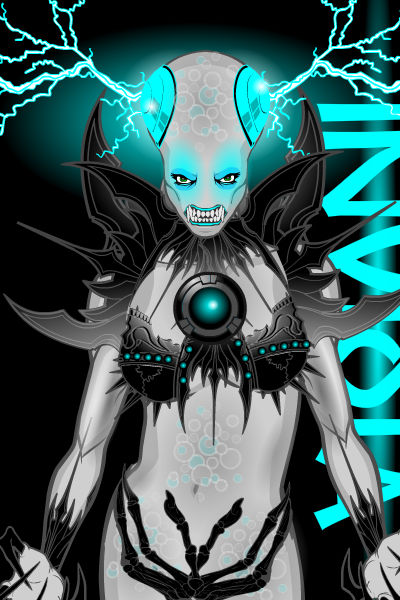 A very, umm… what's the word, sparse costume here, in terms of coverage. But it's still awesome, made out of shoulder-pads, head-gear and an insignia. Oh and I love the shoulder-pads on the head. 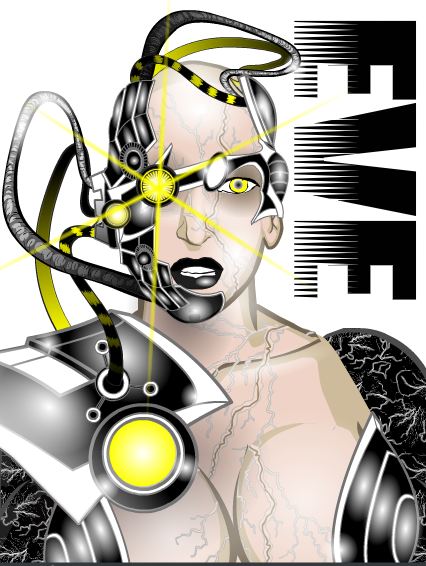 Oh and the cyborg part of it is amazing. Shoulder-pads and tails, just incase there's anyone who didn't realise. That is how you items. 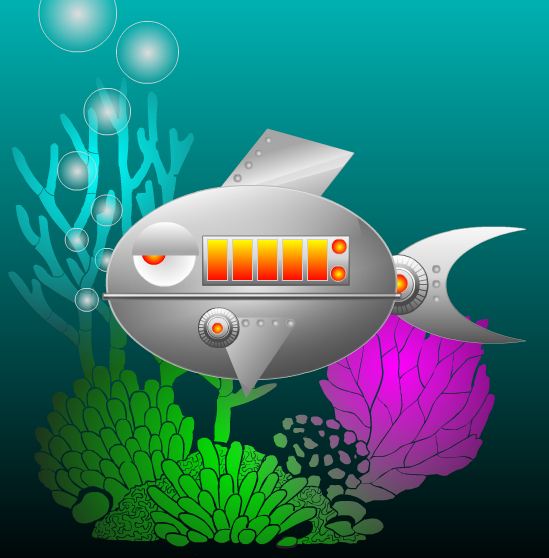 There's something fishy about this one…. Well it wouldn't be a Gallery Grabs if I didn't make a terrible pun at some point would it?

But being serious, this one is genius in its simplicity. The whole thing is a few insignias and a bit from the items-rifles. But it's put together and coloured in such a fantastic way. Plus the design is very cute and rather amusing. 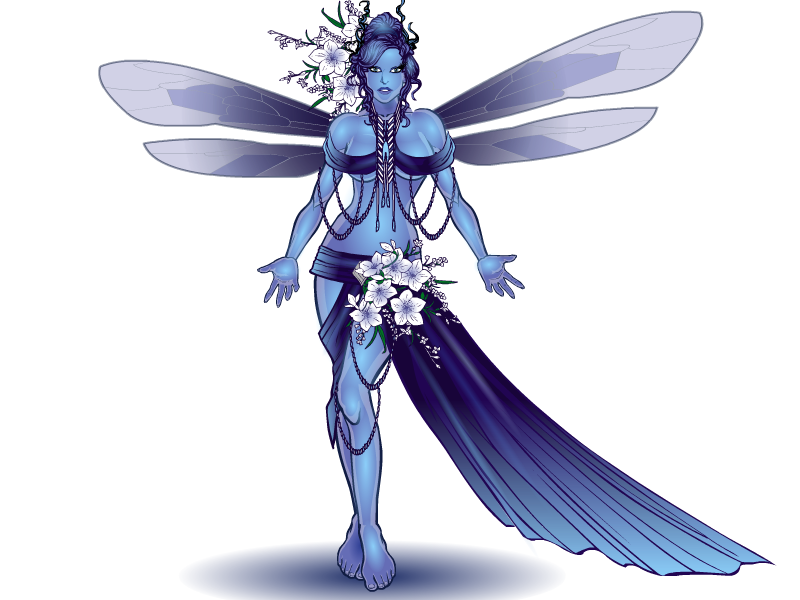 I'm sorry, I'm not even going to justify this one. It doesn't need any justification to be included. Just look at it. 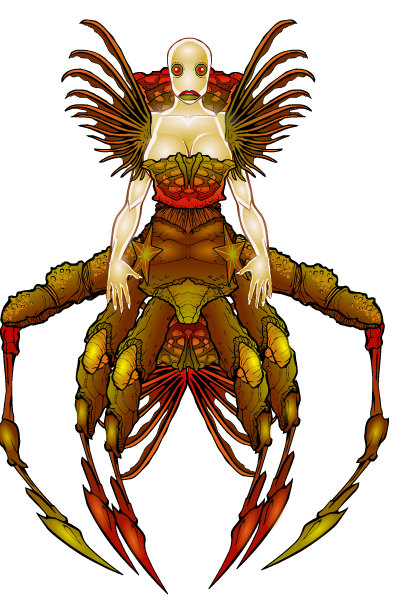 This one however, I have to talk about. It was an entry for on of Hammerknights early CDCs and it still stands out (and should have won really, no offence Scatman if you ever read this). The everything about this screams underwater creature, the luminous slimy looking skin, the large eyes, the crustacean shell, the green tinted colours. It's such an inventive take on the concept. Wonderful. 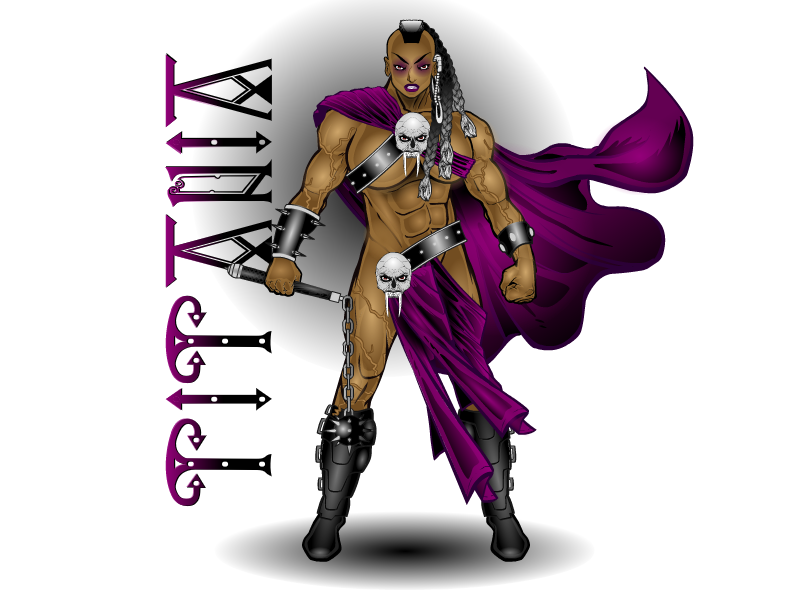 I guess I picked this one out because the body style is so unlike any other character I can think of having seen on the forums. It looks good, if intimidating. Of course, the costume is good, if precariously close to falling off, and that vein effect is still a good one (as we saw with AMS last week). 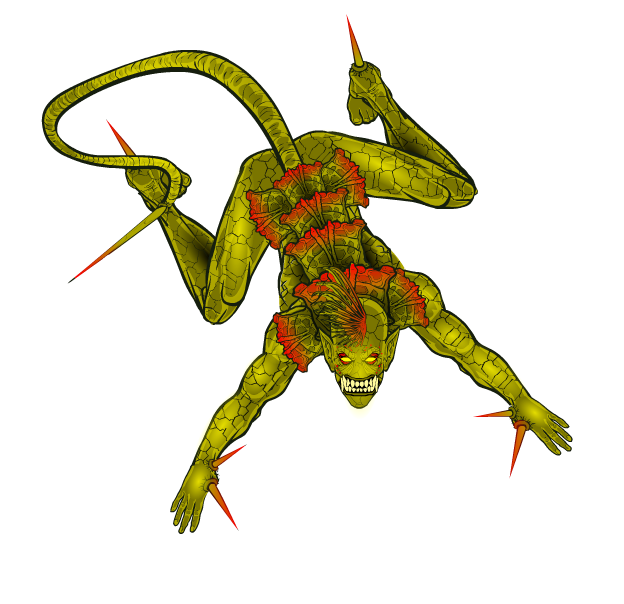 Now, this one won the 4th instalment of Friday Night Fights, which is a pretty impressive feat, especially considering his competition in the final was one of RobM's best works and he isn't a slouch when it comes to HM either. This one comes down to great posing, character expression (both in the posture and face) and, as usual, great colour. It may be simple, but the blending of the red and yellow really pops and makes the creature even more visually interesting than it otherwise would be. 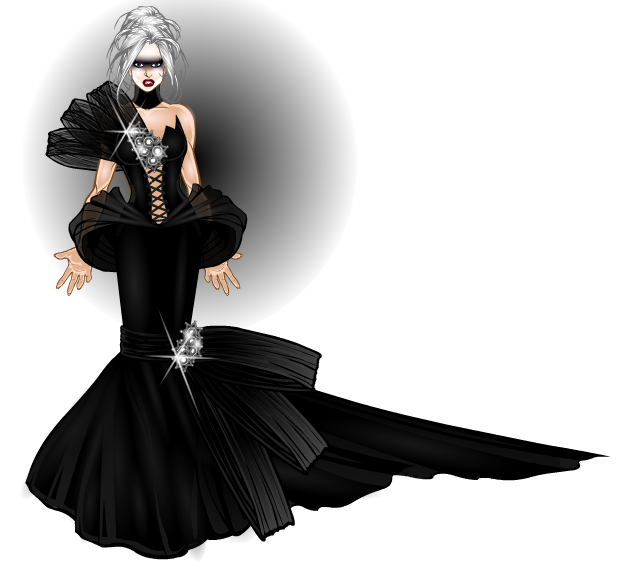 I could go on for hours, possibly even days about this picture, but as I doubt anyone actually has that much time, I'm just say, the dress is gorgeous, the use of belts is wonderful, the hair is jaw-dropping and the whole thing is modelled by Pris from Blade Runner, which just makes it even better. This is the pinnacle of what is one of the best galleries on the forum. 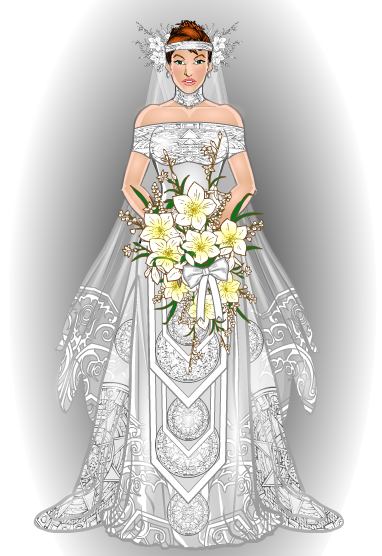 djuby+ Fashion Show CDC= this as well. And as we all know from before, this= awesome.

The shading in particular stands out here, especially on the flowers and the veil. I remember having such a hard time choosing between these two pieces for the poll and I still can't pick between them. 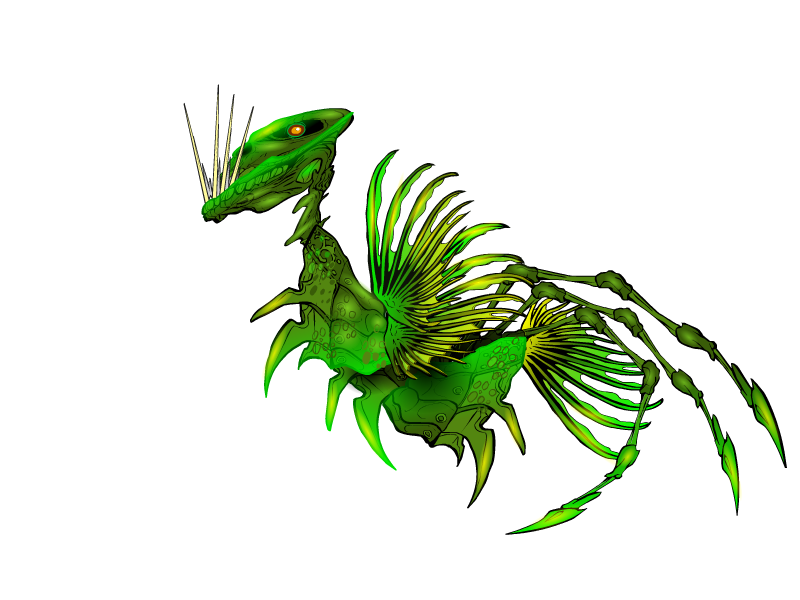 So, creepy mutant seahorse thing, made up of shoulder-pads, ears and wing items ,with amazing shading that adds such vibrancy and depth at the same time and looks so stunning that I can't actually find the right words to use to finish off what I was going to say about it.

yeah, should have thought that one through better. 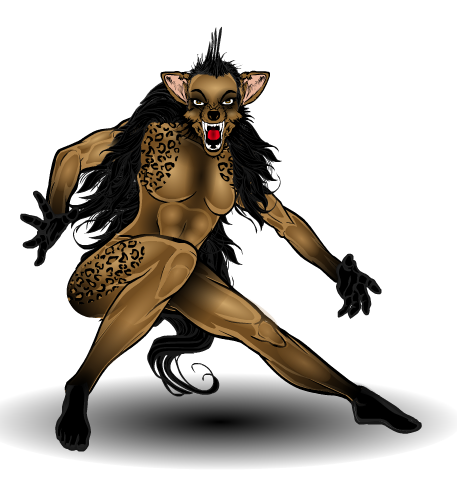 Face, pose, colour, markings, hair, shading, need I say more. Everything about this rocks. Could have done with some claws maybe, but that's just me. 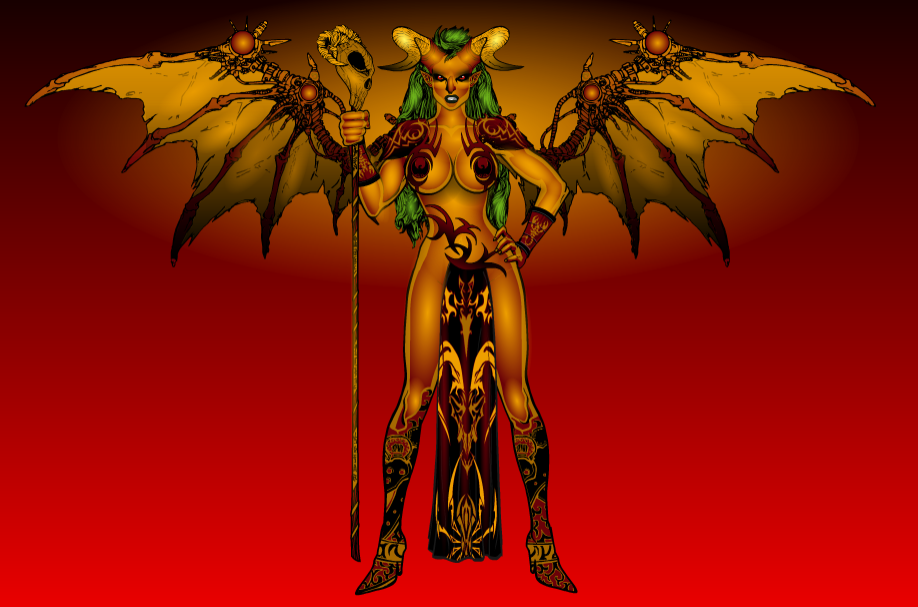 See above. Apart from the claws bit.

But seriously, this is spectacular on every level. The wrist bands and shoes are amazing bits of costume design on their own, one showing what you can do by masking certain items together, and the other showing how effective just adding and insignia to an item of clothing can be. The you have the chest section, which is a wonder use of insignias as a costume on their own. And that face. And don't even get me started on the colour and shading. 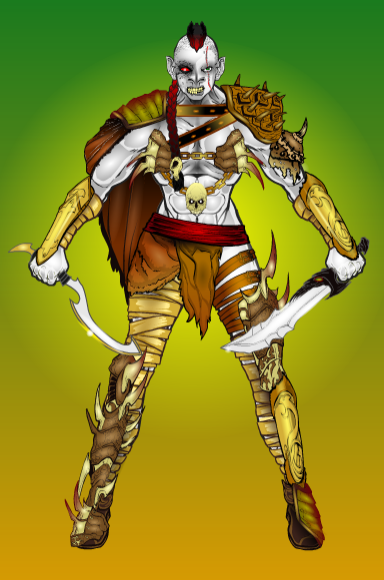 Again with the faces. This one just oozes power and ferocity. The costume is amazing as well. Yeah, a bit redundant saying that now isn't it considering I've said it on pretty much every other picture. I guess that's what happens when you're talking about someone in the profession that djuby is in. 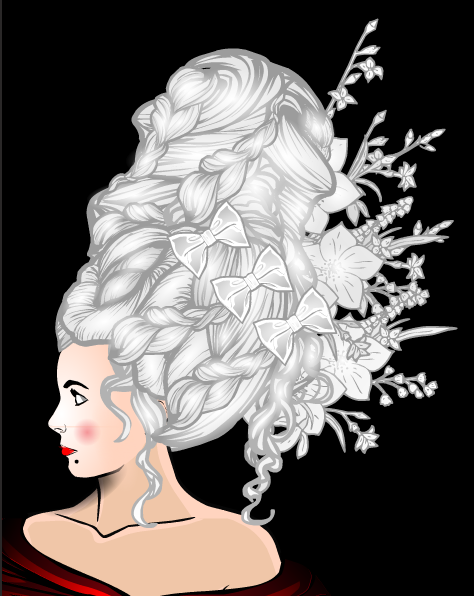 Oh, I wish I had some hair puns.

But really, this truly is a hair-raising creation. A follicle fascinator of the highest order. A wondrous weave of epic proportions. And nicely presented to us with bows and flowers.

Of course, there's a lot more in djuby's gallery than I've included here. So make sure you check it out: DJuby Gallery- Volume 2. It hasn't been updated for a while so it's quite far back in the forum list, but, as you can see here, it contains some of the best art made on Heromachine.