So, I know on last weeks PUP I said I'd be alternating between PUP REDUX and Gallery Grabs each week and we should technically be having a Gallery grabs today rather than a PUP, plus this obviously isn't a REDUX anyway. But really, I would have felt bad if I'd have left this a week, especially as it is welcoming a new person to the Power User club. And I can already tell that a lot of people are going to be wondering why she hasn't done a PUP before (I'm an idiot ok, plus the PM system in the forums is gone so…), but y'all have my permission to kick my ass for not get one sorted out sooner. A consistent feature in the CDC polls (oh btw, this was done before the last CDC poll was closed, so I think we might need to add another to the Contest Win question answer 😉 ) as well as the COTW, if I had to use one word to sum up her output it would simply be; stunning. An expert shader with an eye for detail that puts most people to shame, it gives me great pleasure in presenting to you: Candruth.

Origin of your username: It’s the name of my main character from Lord of the Rings: Online on one of the roleplaying servers. I guess I couldn’t really think of anything better at the time that I made this account.

Picture of you in real life: This is me at Ostia Antica outside of Rome. 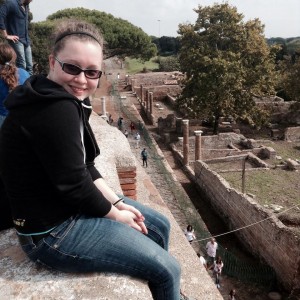 Where are you from? Michigan, USA

Gallery on the forums-- http://www.heromachine.com/forums/topic/candruths-characters-3/

DeviantArt (if you don’t want to scroll through lots of text)-- http://candruthhm.deviantart.com/gallery/

Favorite artwork: This took way longer to decide than it should have, but I think it’s my Alien Woman Portrait. It’s never the first one I think of, but it always stands out to me when I look back through my works, most likely because of the color contrast which was totally not intentional. The eyes also turned out way cool. Favorite movie(s): I grew up on the Lord of the Rings series, so I think I’ll always have a love for those. I also really like the classic comedy movies like The Blues Brothers and Blazing Saddles—Raising Arizona might be my all-time favorite comedy even though I’m so sick of watching it a ridiculous number of times. Hate me if you like, but I think the Watchmen movie is spectacular.

Favorite TV show(s): Seinfeld, right off the bat. That particular brand of ironic humor is absolutely my type. Top Gear is amazing too (British version, NOT American) and on the more serious side of the spectrum, I think Sex and the City and Game of Thrones are binge-worthy. I also kinda sorta watch Ancient Aliens whenever it’s on, as well as those old History Channel documentaries about apocalypse theories and ancient civilizations and whatnot. Those are great.

Favorite Book(s): Have I mentioned Lord of the Rings yet? Atonement might be one of my favorite standalone novels. I try to read both V for Vendetta and Watchmen once a year. I have a particular love for ancient Greek mythology and epics like Iliad and more recently I took a class on Gothic literature where we read books like Psycho, Salem’s Lot, and American Vampire. I’ve also been known to purposefully read terrible romance and fantasy novels from time to time because I do so much academic reading and it’s a nice break.

Favorite Music: I can appreciate just about anything and keep a really open mind about new music, but I really love blues rock. I’d have to say that my favorite band is the Rival Sons, but I recently discovered Goldmund and Radical Face, and rediscovered Locksley, Sloan, Oceansize, The Constellations, and Ratatat. I’ve also listened to bands like Phoenix, the Parlor Mob, The Blue Van, and JET for a long time. I love anything Jack White, and the next concert I’ll be going to is Primus in a few weeks. I go to concerts a lot.

If you could have any superpower IRL, what would it be? It’s pretty mundane, but I’d like to be able to summon things to me. Like, I’d be able to suddenly have my phone from downstairs so I wouldn’t have to get out of my chair.

What do you like to do (outside of HeroMachine) in your leisure time? Aside from videogames, I love to write novels even though it’s ridiculously hard. I’ve written a couple already and am in the midst of doing a ton of rewriting, but I don’t think publishing is in the foreseeable future. At the moment I’m working on a low fantasy standalone story that I’ve been sitting on for about ten years and have yet to get the momentum to finish it after multiple starts. I also play bass guitar, and my college has a formidable jazz band that I’m a part of. I love dirtbikes and motorcycles (Michigan has an awesome offroad trail system) and I’m a MotoGP fanatic and have recently started watching Formula 1.

Ever met anyone famous that you really geeked out over? You’ll have to believe me on this one, but I went dirtbike-riding with Sheryl Crow about ten years ago when she was more popular. I was also on the fence during a spontaneous autograph session with Jorge Lorenzo. I didn’t have anything to get signed, though, so that makes me sad.

DC or Marvel? DC because Batman.

Mage or Paladin? This one… is really tough. I like both equally, but I guess I’ll say Paladin because there’s something really satisfying about wearing gigantic pauldrons and kicking a** and taking names. And not dying.

Character design turn-ons: Mostly things that I’m bad at or can’t do, like creative use of items or impossible poses. Also, colors that go well together and interesting and cool costumes. I like shading, too.

Character design turn-offs: I know this is really vague and unhelpful, but if it doesn’t pop out then it doesn’t do anything for me. If the colors are all sort of haphazard or there’s no real expression in it, then it’s not interesting to me. Really busy backgrounds behind an otherwise good character are also something that turn me away.

Ever won a contest? If so, how many? #81 Golden Age with The Silver Siren and #70 Fantasy with Priestess.

What’s your take on the HeroMachine community? Fantastic! Sometimes I just read back through all of the comments left by people on my works and it makes my day immediately better. There’s nothing but support between artists and seeing someone else’s work that inspires me is totally okay by all parties.

Any personal favorite members from the HeroMachine community? I’ll admit I’ve had a secret love for ExtremelyEpic’s work for a long time. He has a way of conveying a sense of utter awe and massiveness that I don’t even know what to do with. I think Nug has become quite admirable on his shading and puts out some great stuff, and if anyone has the corner on unique and recognizable colors, it’s Linea24.

Best tip for a HeroMachine newbie? I would say that it’s to your advantage to spend lots of time looking at artwork outside of HeroMachine—I find my inspiration by going on DeviantArt or something and just typing in something generic like ‘fantasy’ and scrolling until I see something cool. You can learn a lot about how costumery and posing and body proportion work just by observing. Look at faces a lot so you can know when one looks wrong (i.e. quickly diminishing chins, never-ending noses). I’ve learned most of what I know about light and shadow from charcoal drawings which use only light and shadow. Also, the zoom (headshot) window is your best friend.

Final thoughts: When first coming to HeroMachine I certainly didn’t expect to get as far as I did, and I have the continual support of you lovely people to thank for that. Please don’t be afraid to ask for tips or inspiration or feedback or anything else-- I’d love to help. Please continue being awesome. Keep doing what you’re doing.