Our Power User this week might just be the best Heromachiner to come from Luxembourg, certainly the first Power User from the Grand Duchy. He is also an excellent 'machiner, having created heroes for all 50 states of America (plus 2 for good measure) and national heroes for a number of countries. So, without further ado, it is my pleasure to present to you, madjack.

Online name used in HeroMachine environs: madjack (should be Mad Jack but that one was already taken by a seemingly non-active member).

What is the secret origin of that name: No secret here - my name is Jack and I consider myself a little mad (in the sense of "crazy").

A photo (or drawing) of you in ‘real life’: No problem! This is me choking the snake in Bali ... ahem ... or something like that.

Even if it's technically not an accurate translation, everybody calls me Jack because of my second name Jacques, which is the French equivalent of James or Jacob and often phonetically converted to English as Jack. And yes, I like it - even if some people combine it with the initial of my last name to Jack S.

Real city/state/country: Although I'm a native of Luxembourg, I already live 31 years in Bavaria / Germany. I currently live in Starnberg, a town some 25 km (15.5 miles) close to Munich and very well known in all Germany for its many millionaires and celebrities. Unfortunately, I am none of these.

Real job: I call myself a "digital bohemian" - I guess that sounds better than freelance Media Designer (mostly web design / programming and a little bit print design) with too few jobs and hence far too little income. But I prefer it this way, since I'm not made for a cubicle or regular (9 to 6) working hours.

Gender: A man who knows how to read women but not how to flirt with them. Awkward, isn't it?

Online archive of your creations: I'm working on my own website for my comics under http://www.madjack.de but there is still a lot of work to do before I can launch it. Meanwhile you can see most of my work in my forum gallery: http://www.heromachine.com/forum/the-heromachine-art-gallery/mad-jacks-showroom/

Oh shoot, now you got me. I have no real favorite - I guess it's always (or at least most of the time) the latest piece I've done. But if you insist on a specific one I'd say I'm still very proud of my Corya'Nai. Counter-question to all: What's yours?! 😉 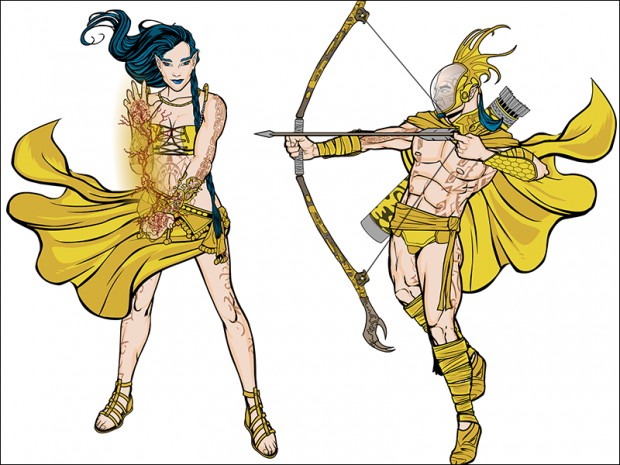 Favorite all-time geeky movie if any:

Comedy: Bill & Ted's Excellent Adventure. "Be excellent to each other... And party on, dudes!"

Sci-Fi: The Blade Runner, Aliens, Total Recall (the first one), and many many more...

Favorite all-time geeky book if any: Hard to say, because I read a lot. But I would say "The Count of Monte Cristo" by Alexandre Dumas, "The Lord of the Rings" by J.R.R. Tolkien (the books were better than the movies), and "The Dark Tower" saga by Stephen King are at the top of the list.

Favorite all-time geeky TV show if any: That would by Supernatural and The Big Bang Theory, followed by CSI NY and Star Trek TNG I guess, but I watch regularly dozens of television series - guess I'm a little bit addic7ed (a pun for insiders).

But since he is not so well known outside Europe I'd say it varies between The Hulk and Iron Man. On the one hand I envy the Hulk to the opportunity of letting off steam and just go hog wild, on the other hand I would not mind to be a billionaire with cool expensive toys.

If you could have one super-heroic power in real life, you’d choose: Teleportation or phasing. No bank vault would be safe from me and if I get caught, you can't hold me for long. I think it's no contradiction to take care of oneself and be heroical at the same time by helping people or saving the world. But I think that would still make me a supervillain in the eyes of the authorities. Sorry for being a bit anarchic here...

In your leisure time you like to: I'm a couch potato - so I have to go with watching TV and reading. Apart of that I spend most of my time in front of a computer creating something. Whether it's a website or a superhero - the main thing is "tinkering".

Character design turn-ons (things you love to see that make for a good design): Everything, which I myself am most of the time way too lazy for: cool action poses as well as great shading and zypping. Combine both and I start to drool with excitement. Also I like a well-conceived concept and when someone pays attention to the little details.

Character design turn-offs (things you hate to see that make for a bad design): Well, there are a lot if things I personally do not like, but tastes differ, so I would never dare to have a low opinion of someones artwork. When I see a work where I think "Urgh - what's that supposed to be?" I say to myself: "Well, all that matters is that he/she (the creator) likes it and that he/she had fun doing it. The journey is its own reward."

Best tip for a HeroMachine newbie: You live and learn. Study the works of others on the forum and get inspired. You will learn a lot of new tricks this way - even if you worked with the Hero Machine from the very beginning like me. I never would have thought to at least try such things as zypping or creating own poses before I saw it for the first time in the forum.

Any personal message you’d like to share with the HeroMachine community about Geek Life: "Age of the geek, baby! We run the world!"