Character Of The Week- 3rd August

Finally, for the first time since the second Character of the Week, we're going to look at a character. And what a character it is. Sakura Master by Jeimuzu 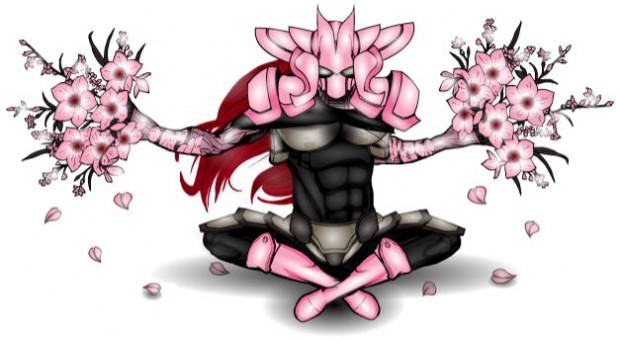 Now, Jeimuzu has been causing quite a stir on the forums since his first post two weeks ago, and I could have put any of the characters he posted this week up for COTW, but I felt drawn towards this one.

We'll start of with the headgear, which looks like it belongs on a space villain from an anime kids show (and I do not mean that in a bad way, I grew up on 'em). I've no idea how he'd move his head left or right, but it looks badass, even in pink. Plus it's a good use of an item in a way it wasn't designed for, in this case shoulder pads for headgear, which always wins big points. I can see a samurai influence in the helmet design, which I'm sure isn't just because of the Japanese connotations of the character name.

If we now move on to the pose, the lotus position is a must do if you are doing an oriental character, but the fact the character has his arms outstretched, with a dark glare fixed on the viewer suggests to me that he's only a nano-second from some serious pain dealing.

Colour wise, there's nothing bad to note. It's hard to carry pink off well, especially on a male character, but it works here. I also like the shading, although the alpha on the neck- cape could come down a bit to the level of the torso shading (which works really well). The problem with choosing the lightest colours of the pallet and then doing highlighting with white is that the white can often over power the main colour leaving the picture looking swamped, but thankfully this hasn't happened here. Jeimuzu has found a happy medium, especially on the boots and flowers.

The last bit to talk about here is the attention to detail. And here I have to highlight the arms, or specifically the join between the arms and the flowers. It looks very natural and there are no lining up problems as far as I can see. And I also like the use of the leaf insignias as falling petals, something that is very associated with Japanese culture (usually seen in pictures of Geishas), another great touch in subliminally telling the viewer of the characters culture.

6 Responses to Character Of The Week- 3rd August