A fundamental part of costume design for super heroes is to reflect the character's origin and story. Just like in the real world, what they wear should tell you something about them. Today I'm going to take a look at one of my all-time favorite outfits, told in two parts -- Green Lantern.

The original Green Lantern debuted in 1940, and derived his powers from magic. That origin is reflected in his dramatic cape with popped collar, tied boots, wide leather belt, piratically puffed shirt sleeves, and dramatic coloring: 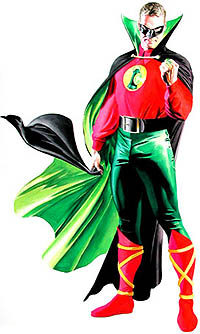 You know just by looking at the guy that there's something a little mystical and dramatic about him. Elements of his costume harken back to the Art Deco aesthetic of the Twenties and Thirties, but with a flair for the magical and dramatic that fit the Golden Age perfectly. The slightly flared jodhpur style leggings, for example, and the domino mask, along with the big chest logo clearly say "This is a Golden Age Super Hero". It's a really good design, fitting the character and his era perfectly.

But times change, and alas the final appearance of the Alan Scott Green Lantern was in 1951.

Fast forward eight short years, and the powers that be at DC wanted to revisit the character. Legendary artist Gil Kane was tasked with designing the visuals for this new edition of Green Lantern. America had moved from the Golden Age's mysticism (a time when Hitler was actively searching for magical relics like the Ark of the Covenant!) to a new era with atomic bombs and trips to the Moon in the offing. A magic green lantern wasn't going to do it, so instead we got aliens in charge of a galactic police force. Clearly there was no room for a cape and pirate sleeves, so Kane developed this instead:

Sleek and modern, with more muted colors, this outfit is unmistakably super-heroic, but without the circus-like aspects common in the Golden Age. The black elements suggest the darkness of space, the white the clarity of starlight, and of course the green for the color of his ring. We've gone from six colors in the original to just three here, a minimalism that doesn't have space for frippery or nonsense. We've got giant glowing hammers to make, after all!

Alan Scott's costume was all about flair, angles jutting out and causing movement, sleeves breaking up the line of the arm, pointy boot tops and chain links on the cape. The new GL had no extraneous lines, allowing the clean athleticism of the human form to shine through. The lantern insignia has been simplified down from a fairly realistic three quarter view to a head-on abstraction, just two lines and a circle.

Every element works to project the sense of a man of action and no nonsense, someone who would be at home on a spacecraft, cleaving through the hazards in his way with a laser-like focus. It's a triumph of costume design, recapitulating not only the character's time but his fundamental self. Along with the revamped Flash, this costume helped set the tone for super-hero comics for fifty years, and it's easy to see why. Gil Kane took the essence of the concept and boiled it down to its absolute starkest expression, and in so doing created a standard by which all future designs would be measured.