I'd be frosty wearing that, too 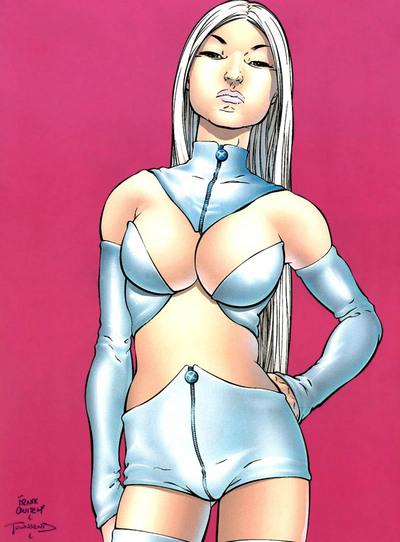 You have to start with the ridiculous gravity-defying side-boob bra. One assumes she keeps it up either through dedicated TK or really strong double-sided tape, either of which exhibits a truly epic level of dedication to ... well, exhibitionism, I suppose. Unless that thing is made of stiff plastic and hides a virtual scaffold of underwires, she's going to bounce out of it the first time the Blackbird hits turbulence.

What really gets me, though, is the X-Diaper, now featuring gratuitous crotch bulging. Not only is it unflattering and not only does it share the same gravity-defying power as the top, but the all-the-way-down zipper hits an all new low. Literally. This is a piece of clothing designed by someone who has never actually worn pants. Or had lady parts. Can you imagine actually zipping this thing up? Any fashion accessory that requires a hand mirror under your butt to put on is a fashion accessory that has failed.

The topper (again, literally) is that dickey she's wearing. Seriously, if your costume involves the word "dickey", you've lost before you've started. I know they were going for the "stylish slut" look here, but between the diapers and the mid-century failed tuxedo shirt underlining, what they actually got was "Old Folks' Home Escapee".

25 Responses to I'd be frosty wearing that, too