Continuing our examination of the worst fashion moments in the history of the Avengers in honor of the movie release, we turn our attention this week to Iron Man.

Possibly the super hero with the largest and most varied wardrobe in all of comics, Tony Stark as Iron Man changes costumes seemingly with each new dawn. From the original gray turtle to the classic gold and red to armor specially made for the Arctic to the deep sea, I would wager most of the profit from Stark Industries goes to suit storage fees. So many variations exist that multiple fans have been driven to build databases just to keep track of them all.

The Silver Centurion armor from his West Coast Avengers days was always my least favorite:

I thought it looked so much clunkier and chunkier than the sleek red and gold model, from the oversized helmet to the massive underwear to the pasty white color (it never came across as "silver" to me, just white). I hated it.

But while looking into the Cap costume I featured last week, I came across an EXTREME version of Iron Man that to my shock is even worse. MUCH worse: 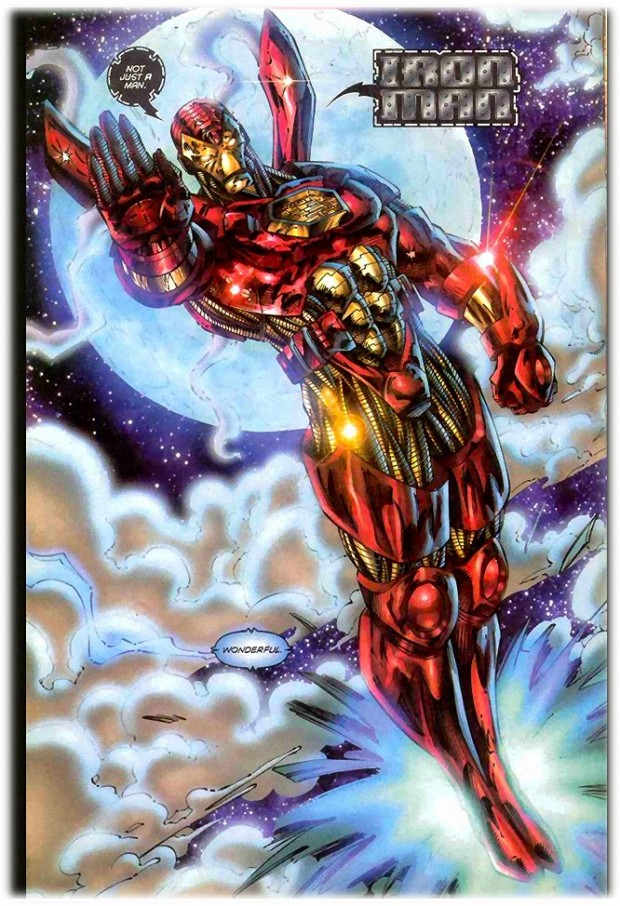 This was from the Jim Lee and Rob Liefeld "Heroes Reborn" project in 1996, also known as "When Marvel went insane in their pursuit of money and whored out their most popular characters to the people that ruined comics". (Fun fact, Liefeld's company was actually named "Extreme Studios". You can't make this stuff up!)

Apparently Jim Lee was in charge of the Iron Man redesign, and I think you can see why so many of us Old Farts crapped ourselves when it was announced he was going to bring this same level of vision to the Justice League.

Let's start with the basic question, "Why does Iron Man need smoke stacks coming out of his back? Is he Steampunk Iron Man and I missed the memo?" Let's ignore the fact that those things are the worst idea in aeronautics since the Hindenburg met static electricity and would get ripped off at the velocities Shellhead is capable of reaching.

No, let's stick with saying they just look flat-out ridiculous, a completely unnecessary and aesthetically unpleasant add-on that does nothing for the design except make you want to spit it out like an accidental bite of gristle when you thought you were eating steak.

I think the chest piece sums up "The Jim Lee approach to costume design", which is to take a clean and simple element and add unnecessary lines to it. We went from the original simple circle, eventually to a triangle, and now to a hexagon. Complexity is good! I hope to eventually see the Jim Lee Dodecahedron Armor. And if six sides aren't enough lines for you, never fear, because we can jam a whole frigging circuit board into that thing! More lines, stat!

On a side note, I have to admire Lee for being willing to introduce "Flower Power" to Iron Man's boot jets. Nothing says confidence in martial ability like flying around on a pretty blue lily.

Another great Jim Lee hallmark is the introduction of the armored belt pouches. I have been trying to figure out what the heck Iron Man would keep in there that's important enough to tote along but not important enough to build directly into the armor like everything else. Passport? WD-40? Condoms?

Judging by the Iron Banana Hammock, I'd bet it's the latter. Seriously, that thing looks like it walked right off a European beach and into my face. Tony, my man, if you're going to advertise the merchandise, don't undersell yourself!

Finally, I can't help but wonder how he even walks around in that armor with the massive thigh shields. He'd have to waddle like a Sumo wrestler. Why armor only the middle of your thighs? Is that middle third somehow super vulnerable while the upper and lower parts are naturally resistant? It makes no sense.

In short, I'm going to have to declare that my vote for "Worst Iron Man Costume Ever" goes to this Jim Lee Steampunk European Beach Iron Banana Hammock Hexagon Uni-Beam With Unnecessary Fiddly Bits And Belt Pouches version over the West Coast Avengers design. Any time you're in a contest with both "West Coast Avengers" and "Worst Costume" in the title and you lose, you're into some pretty epic territory.