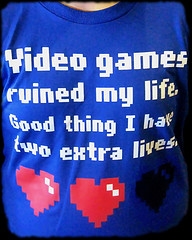 I think older audiences (raises hand) don't quite appreciate the impact computer games have had on the younger generation. We all talk about movies or books that profoundly influenced us while younger, but I suspect video games have done the same for a lot of folks.

So here's what I would like to know about you:

What computer game (not necessarily an RPG though of course it could be) would you say has had the biggest influence on you in real life?

In return, if you wish you can ask me any question you like about whatever you like, which I will answer either completely truthfully or not at all (in which case you can ask something else). You don't have to ask me anything if you don't want, but I'd still like to hear your answer to the question.

Speaking of which, my answer would be:

"Civilization". Seeing what a big difference location makes to the success of a culture definitely changed how I read history and view other countries. A few years after first being addicted to it, I was at a museum exhibit about the Aztecs, and you could really see how the resources they had starting out shaped the entire culture. Not choosing the "Wheel" tech was a big deal, too. And you could see how Tenochtitlan had to be built around massive irrigation due to the rocky surrounding climate. It was like seeing a game session played out in real life! It also led me to "Guns, Germs, and Steel", a fascinating look at how technology spreads, how resources vary from culture to culture, and how much of a difference early choices make in cultural development.

Plus, it was completely addictive fun!

Now it's your turn!