In honor of our last contest featuring Timberwolf, your Character Design Challenge this week is to create a new member for the Legion of Super-Heroes! 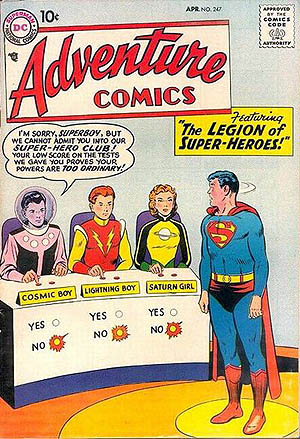 For those of you who aren't aware of this inspiring futuristic super-team, the version I'm most nostalgic for is the one featuring a group of 24th century teenagers who band together to fight super villains threatening either the Earth or one of the innumerable other planets in the Federation. Or whatever they call their goody two-shoes planetary league, you can't expect me to go through all the trouble of looking something up!

More importantly than that, I loved the Legion growing up, although I am sure it has been ruined by future generations just like everything else anyone my age ever loved. For instance, have they ever introduced anyone else since then with the awe-inspiring nature of "Matter Eater Lad", whose power is to eat stuff? I kid you not, my friends, that was the incredible power of my creative cohorts while growing up. And it's probably a good insight as to why we're leaving you such a hosed-up planet. Oops.

Arguably the best thing about the Legion was how 1950s their entire team was, despite allegedly coming from far in the future. The haircuts, the costumes, the logic-defying awfulness of their original rocketship headquarters, and -- above all -- the apparently iron-clad early rule that your name had to end in "Lass" or "Lad". Or sometimes "Girl" or "Boy". Apparently in the future the adults completely lack the spines necessary to either fight for themselves or to enforce good taste on their ill-begotten offspring.

Regardless, you must come up with a suitably futuristic and super-powered member to fill out their already over-bloated ranks. You can play it straight (as I said, I did love the Legion) or you could go silly, and note that your character is slotted to join the "Legion of Substitute Super Heroes". Yes, that really existed, too. The next time you're wondering how we let the polar ice caps melt, take a look at Polar Boy and Plague Girl. I shit you negatory.

I'll be judging on the usual "Is it awesome" criteria, but also for suitableness to a futuristic super-hero team. You're going to have a hard time convincing me that the rifle-festooned zombie corpse of the Punisher's 24x great-grandson would be a fit Legionnaire, for instance.

Since this sort of contest might be interpreted by some to be a license to spam everything they ever came up with in the past, we're limiting entries to no more than five apiece.

I look forward to seeing what all you lads and lasses come up with!